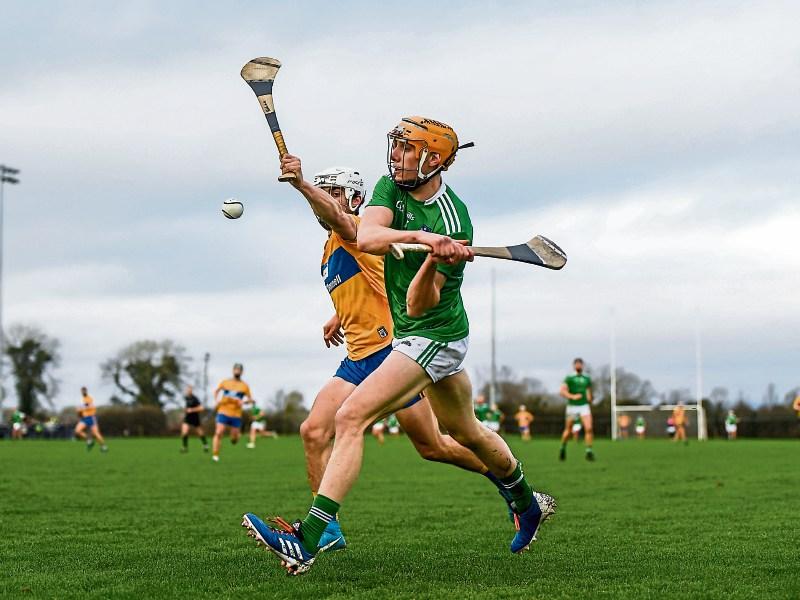 If one was in any doubt about the appeal for hurling then that question was answered in Sixmilebridge last Sunday when almost 3,500 turned up to see Limerick and Clare play in the Munster Hurling League.

Games this time of year will matter little when it comes to the business end but they do provide us with some nuggets as to how teams are progressing.

Games between Limerick and Clare are always interesting and close but at no stage were Limerick troubled by Clare in this game.

What we saw from Limerick was that their attitude and work rate were very good. They went about winning it from the opening whistle.

David Reidy was in fine form and finishing the game with 1-12 to his credit tells you that this player will be a serious challenger for a starting place come championship time.

Just as it was in the game against Tipperary, Adrian Breen was again showing signs that he has the pedigree to survive at this level. Limerick were ahead 0-9 to 0-1 after sixteen minutes as Clare struggled to match the energy on show from Limerick.

Brian Lohan won't lose sleep over this game but he will have left Sixmilebridge knowing that some of the players on his panel will find it hard to come to terms with inter county hurling.

Playing conditions in Sixmilebridge were excellent and great credit to the local club. The pitch did cut a little but overall it provided the ideal surface for this game.

I was surprised at the low intensity we witnessed from Clare particularly in the opening twenty minutes. They lacked bite and they also lacked a willingness to work as a unit.

Limerick showed for the ball, the forwards were well supplied and they punished the Clare backs who were under a lot of pressure. Limerick played two in the full forward line and it worked well.

When it comes to work rate one player that is really putting his hand up is Robbie Hanley of Kilmallock.

He has the gears that are needed for midfield but also I really like his honesty. He worked his way up and down the field and was the most impressive player on view in this game.

He will give Limerick options but don’t be surprised to see him start the championship. These games will benefit him but his confidence will grow even more when he gets a few league games under his belt.

He has ability to get on a lot of ball and is also good to get himself out of trouble and find other players.

In the past couple of games Darragh O’Donovan was played at half forward and it would appear that management might well be considering him playing there with more regularity. If that is the case then this line might well be the most competitive in the team as players like Hayes, Hegarty and Morrissey will also be looking to play in it.

Were it not for Niall Deasy Clare would have struggled to stay in the game. He landed five of the nine scores Clare got in the opening half while David Reidy accounted for seven of the thirteen for Limerick.

Clare did improve towards the end of the opening half but for long stages it looked like Limerick were going to blow them away.

I didn’t see urgency from Clare on the pitch and it was much the same on the sideline in the first half but I am sure Brian Lohan had a few harsh words at the break.

Clare had cut the Limerick margin to three points inside the third quarter but they relied heavily on Niall Deasy to keep them in the game.

The quality of the game improved somewhat as Clare came to grips with some of the Limerick players. Diarmuid Ryan was showing improvement but most of all they worked harder.

When David Reidy scrambled a goal for Limerick it looked like the contest was well over. A low key Tony Kelly did land a point for Clare but a couple of points from Adrian Breen had Limerick leading 1-22 to 0-18. Aaron Shanagher produced a goal for Clare but it was much too late to have any real impact.

Limerick went onto close out the game and had good points from Josh Considine and Tom Morrissey. Indeed Barry Hennessy once again had a fine game.

He made a couple of great saves and one in particular just on the call of full time from Colin Guilfoyle who blasted from close range. Mike Casey was also impressive for Limerick while Barry Nash also worked very hard. Nash tends to run a lot after winning possession and it doesn’t always work out.

Ronan Connolly from Adare was at midfield and will benefit from every outing. One of the impressive features from Limerick was some of the good points they scored. On many occasions they were hit under pressure and some at very tight angle to the sideline.

This will please John Kiely and his management team who will want to curtail the amount of wides they have shot over the past couple of years.

Indeed after the game John Kiely said he was happy with the application and attitude of the players, “I think the lads worked really well. We want them to make good decisions on the ball and while it’s early I am pleased to see them doing that.”

Limerick will now host Cork in the final and Cork in a double header with the Limerick footballers who also face Cork in the McGrath Cup final.

This will be another workout for the players and most especially for the younger players who need game time. Cork have a new management team in place and like Limerick they too are looking to find players that will challenge for positions.

For the most part John Kiely has reached the final without going deep into to many of his first choice players and that must be pleasing to him.

The National Hurling League starts back on January 25 when Limerick travel to Thurles for a Saturday evening battle with great rivals Tipperary.

It will be interesting to see what Limerick's approach to the league will be. What we saw last year was that teams were happy to go full belt in the open games but many of them then pulled back.

Limerick can expect a stiff challenge against Cork in the McGrath Cup final. Cork have a lot of talent at their disposal and winning the Minor and U20 All-Irelands last year have provided great hope for them.

They have also brought in former Kildare manager Cian O’Neill as coach and he will bring a lot to the table.

He has vast experience having had success with the Tipperary hurlers and the Kerry footballers. Cork are building for a bright future and while it may take them a year or two I do think they will be a major power in football very soon.

They, like Kerr,y have a lot of young players coming through and that is always a sign for the future. A win here for Limerick would give them great confidence. The difficulty for a county like Limerick is that the football base is weak and it will always play second fiddle.