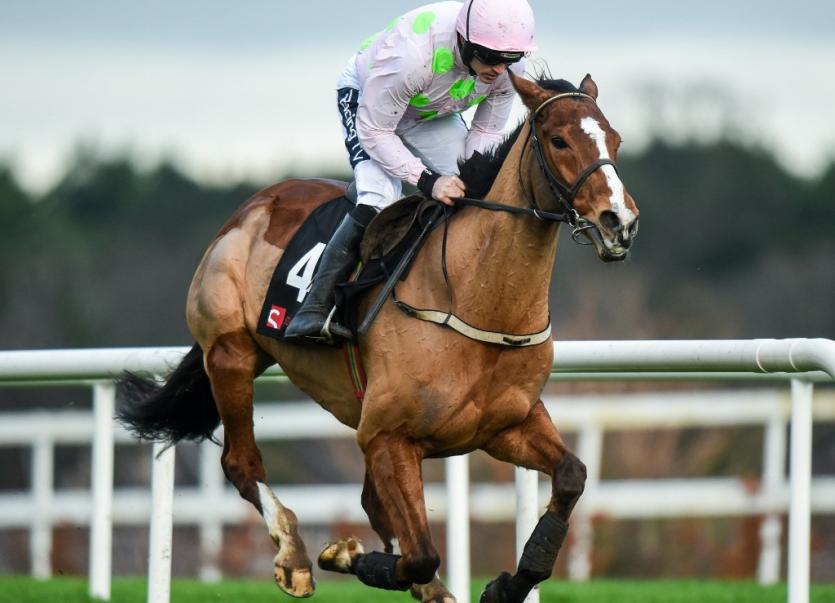 Faugheen is a leading fancy for the Grade 1 €100,000 Matchbook Betting Exchange Novice Chase on St Stephen's Day at Limerick Racecourse

THE mouth-watering clash of heavyweights Faugheen and Samcro in the €100,000 Matchbook Betting Exchange Novice Chase is the feature race on St Stephen's Day at the Mr Binman Limerick Christmas Racing Festival at Limerick Racecourse.

The St Stephen's Day feature race at Greenmount Park, which is a Grade 1 contest run over two miles and three furlongs, is due off at 2.40pm. Racing begins at Limerick Racecourse on that day at 12.25pm.

The four-day Festival, which runs until December 29, is the biggest annual National Hunt meeting in Munster and this year's event will be the first green racing festival where all involved have committed to reducing single use plastics.

The line-up for the St Stephen's Day feature race includes the Willie Mullins-trained Faugheen who boasts nine Grade One victories among his 13 wins over hurdles, including success in the 2015 Cheltenham Champion Hurdle.

Pre-race favourite, the seven-year-old Samcro, made a successful chasing debut at Down Royal - and looked the most likely winner of the Drinmore Novice Chase at Fairyhouse earlier in the month until coming to grief two fences from the finish.

The select field for the Grade 1 contest also includes Off You Go, trained at Ballingarry, Co Limerick, by Charles Byrnes.

The big race will be televised live on RTE TV as part of their coverage of the Leopardstown Christmas Festival.

Gates open at Greenmount Park on St Stephen's Day at 10.30am.

The event is one of the biggest highlights of the local social and sporting calendar and provides a multimillion euro bonanza for the local economy, through racecourse direct sales, service contractors, bookmakers, hotels, restaurants, transport providers and employment provided.

We are all set for @MrBinman Christmas Racing Festival! Happy Christmas everyone pic.twitter.com/PseOCYVInA

Tickets for the Mr Binman Limerick Christmas Racing Festival, including hospitality packages, can be booked on www.limerickraces.ie or by calling 061-320000 or by e-mailing info@limerickraces.ie