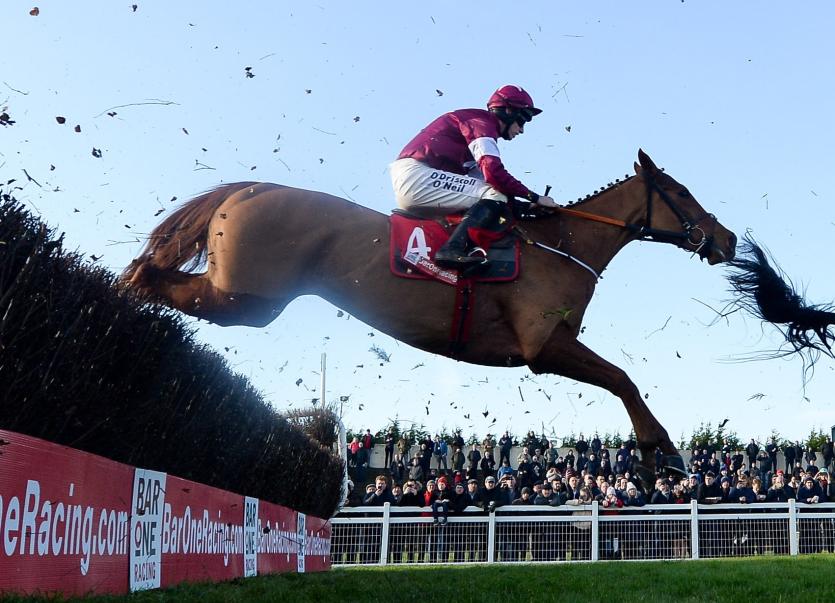 Samcro, with Jack Kennedy up, clear a fence during the BarOneRacing.com Drinmore Novice Chase at Fairyhouse earlier this month

LIMERICK'S big four-day Christmas Racing Festival has been given a major boost with confirmation that heavyweights Faugheen and Samcro will do battle for the €100,000 Matchbook Betting Exchange Novice Chase on St Stephen's Day.

The St Stephen's Day feature race at Greenmount Park, which is a Grade 1 contest run over two miles and three furlongs, is due off at 2.40pm. Racing begins at Limerick Racecourse on that day at 12.25pm.

The Willie Mullins-trained Faugheen boasts nine Grade One victories among his 13 wins over hurdles, including success in the 2015 Cheltenham Champion Hurdle.

Faugheen, affectionately known as 'The Machine, is a late recruit to the chasing ranks as an 11-year-old, but he made a smart start to his career over fences at Punchestown last month - recovering from one serious mistake to win decisively.

Willie Mullins' son Patrick will be on board for the first time since steering him to success in a bumper at the 2013 Punchestown Festival.

Seven-year-old Samcro made a successful chasing debut at Down Royal - and looked the most likely winner of the Drinmore Novice Chase at Fairyhouse earlier in the month until coming to grief two fences from the finish.

Elliott also saddles the only mare in the field in Tintangle.