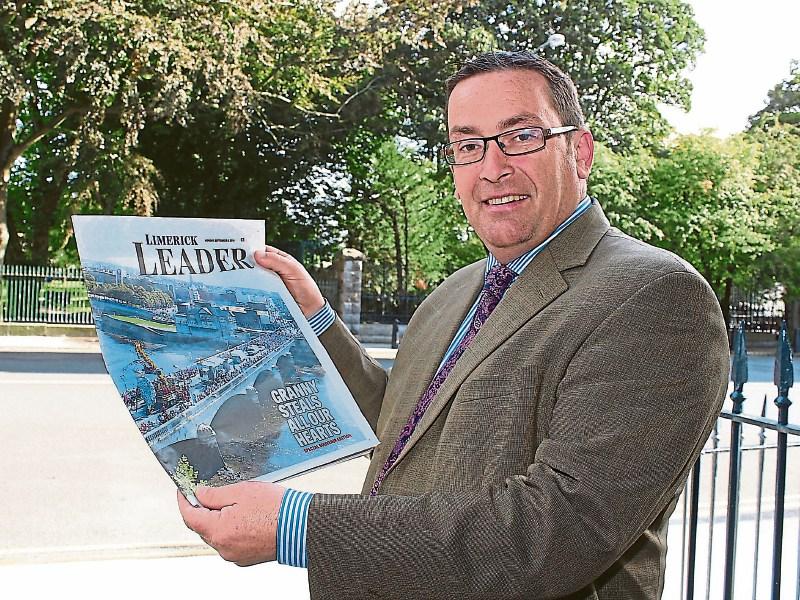 Paul Foley was the big winner at the Limerick GAA convention last Monday night when he secured the top job of representing Limerick in Croke Park.

This was a hotly contested position but Foley, from Patrickswell, had a fine victory over Frank Reidy, who like Paul Foley, was a member of the Munster Council.

The valid poll was 206 and Foley captured 118 while Frank Reidy secured 88 votes. Frank Reidy had been working hard over the last twelve months and he left very few stones unturned.

Paul Foley was always seen as the favourite and his vote remained strong on the night. The Foley’s have given outstanding service to Patrickswell and I am sure his late father Paddy and his uncle Willie would have been immensely proud.

Addressing the large attendance in both Irish and English it was easy to see that the former Patrickswell player was greatly honoured to win this contest,

“I am deeply honoured to be elected and I look forward to representing Limerick in Croke Park.” He was lavish of his praise of Frank Reidy.

“Frank put in a massive effort over the last year or so. We worked together at Munster Council level and we always did so in the best interest of Limerick GAA.”

Paul Foley won all major honours with his club and also represented Limerick at all grades and he took time to mention his club during his speech,

“I am very proud of my club and it was a pleasure to have been a player, coach and official. It would not be possible to be involved were it not for the support of my wife and three daughters. I look forward to working for the clubs and Limerick in Croke Park. I thank the people that have guided me, mentored me. I am grateful for the support of fellow officers, they are fair minded and work well with each other. We will have to redouble our efforts in 2020. I will try to influence the importance of club support and from a Limerick point of view we have urban and rural to look after. I would like us all to work for the betterment of Limerick GAA in the year ahead and I thank you for your support and I look forward to working for you.”

Conventions are fast losing the bite that they once had and the crowd would have been very small if no elections took place.

This convention also had another contest for Munster Council. Four stood for two positions and when all votes were counted it was Seamus Twomey and Denis Carroll came out on top.

They defeated Donal Morrissey and Mike Cunningham. It took three counts to get a result with Twomey elected on the second count. The quota was 69 votes.

Mike Cunningham was ahead of Denis Carroll by just two votes after the first count but Twomey and Carroll did best when Donal Morrissey’s votes were dispersed.

Seamus Twomey was always in the driving seat and his first count vote of 67 was a reflection of that. Mike Cunningham had worked hard in the board over the last number of years but Denis Carroll put in a massive canvassing campaign that saw him get to the core of clubs. Indeed his time in Bord nOg would also have been of considerable assistance to him.

This was a tame convention and many delegates left the minute they had cast their votes. It was a poor reflection on some clubs that they didn’t bother to show up for convention with their full allocation of delegates.

Many of these same clubs like to be the voice of reason at normal County Board meetings. Likewise one Divisional Board had only one officer present to vote and it tells you a fair bit about that board.

John Cregan spoke on many topics in his speech and it was interesting that he touched on corporate governance on a couple of occasions.

He said Corporate governance is a hot topic at the moment and that Limerick GAA would have to have best practice in this regard.

He also spoke about improved support for schools and this is an area that needs a major overhaul.

He didn’t dwell too much on Divisional Boards but you got the sense change is going to happen in this regard.

He said an independent person would do a review of the board structure in Limerick. While that independent person must be given the time to do his report I think most people will expect some change and as I mentioned in recent weeks the current four could easily become two.

The County Board financial report is in a good enough position but they still have loan commitments to meet over the coming years.

The high cost of preparation of teams is like a run away train and the meeting was informed it was up 14% on last years figures. They were greatly helped this year with better gate receipts and of course winning the National League was a major financial boost to the county. They were also helped that JP McManus looked after the team holiday. Had that not been the case it is doubtful the board would have returned a profit.

Liam Burke said no stone would be left unturned in an effort to support the teams preparation. Limerick carried six extra players in both the senior hurling and football squads and that would have added to the cost.

At convention Liam Lenihan launched the Strategic Plan for Limerick that will run up to 2022.

He gave a wide address and also spoke about the importance of not resting while things are going well. The Strategic Plan has a foreword from GAA President John Horan. Limerick are in a good place right now but the current players will move on in time.

It’s really important that the ground work is done now to make sure we have a strong supply line in the years ahead. I mentioned in recent weeks about growing the numbers involved in the academy and this can be further fostered in the divisions.

On arriving at convention I learned of the death of Willie Keane of Ahane.

He was a loyal servant of Ahane both as a player and officer. I had great respect for Willie Keane, he played with great pride for his club and Limerick. He served the GAA at so many levels and he was widely respected in every corner of Limerick and beyond. To his family, club and friends I offer my sincere sympathies.

It seems only like yesterday that I wrote such words and yet another year is fast coming to a close. Christmas is a time of reflection, a time to look back on things good and bad.

For Limerick GAA it was a good year where cups were won and happy times were had. Yes we would have loved to win back to back titles but the pain of defeat is what will drive us in 2020. For so many GAA supporters it will be a time of great sadness, a time when loved ones will be remembered particularly those that passed away this year.

Many tables will have a vacant chair this year and we remember especially those that are gone.

To all readers I wish you a happy and peaceful Christmas.