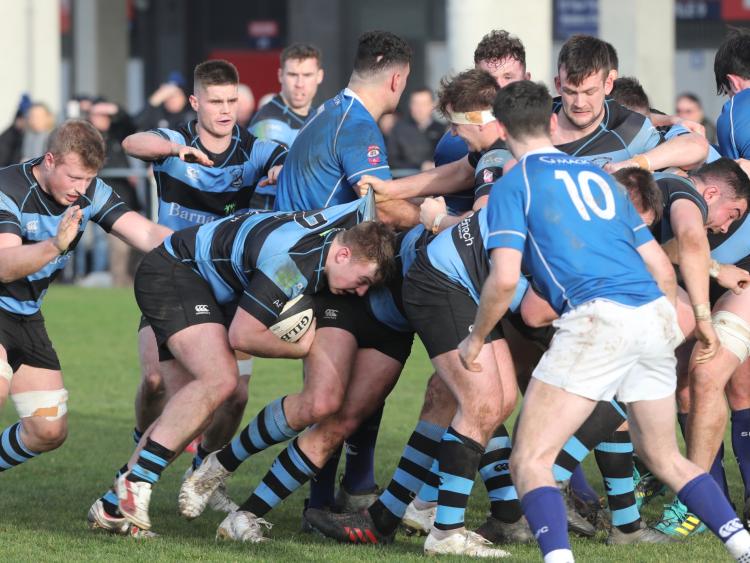 Shannon's Adam Moloney carries at the back of a maul in his side's energia All-Ireland League Division 1B victory over St Mary's College at Thomond Park's back pitch Picture: Dermot Lynch

THERE were five Limerick wins on a dramatic day of action in the penultimate round of energia All-Ireland League fixtures prior to the Christmas break.

In Division 1A, in-form Garryowen made it five wins on the spin after recording a clinical 25-10 bonus point win over UCC at Dooradoyle.

Also in the top flight, Young Munster made it three wins on the bounce when scoring a thrilling 26-24 come-from-behind bonus point win over Ballynahinch at Ballymacarn Park.

In Division 1B, Shannon got back to winning ways when easing past St Mary's 24-11 on the back pitch at Thomond Park.

Meanwhile, in Division 2A, Old Crescent took a maximum five-point haul from their short trip to North Tipp when recording a 34-15 bonus point success over Nenagh Ormond.

Also in 2A, UL-Bohemian scored a precious 50-24 bonus point win over Dolphin on the 4G rugby pitch at UL to move out of the relegation zone and up to eighth place in the table.

Finally, in Division 2C, Bruff, dropped to sixth place in the table after losing out 18-13 away to Clonmel.

Garryowen went into their home game with UCC on the back of four wins, in contrast to the students who had lost their four previous AIL fixtures.

The home side enjoyed a significant 13-0 half-time leading, the Light Blues scoring two tries in the opening half from Cian Hurley and Dave McCarthy.

'12 WATCH TRY @GarryowenFC mail over the line after a routine lineout, Heuston misses the conversion 8-0 pic.twitter.com/vcdKgDlJZy

Conan Doyle's charges added their third try in the third quarter when Colm Quilligan dotted down from close range for 18-3.

The bonus point was secured late on when Johnny Keane crossed the whitewash after an excellent passage of patient, controlled play.

Young Munster made the trip to Ballynahinch on the back of successive league wins. However, the Limerick side trailed 7-24 at half-time, having led 7-5 eight minutes before the break.

Munsters' did manage a second try through Fintan Coleman, but found themselves trailing double scores at 12-24.

However, the visitors rallied strongly over the remainder of the game, scoring two tries, from Conor Bartley and Evan Cusack, which he also converted to record a smashing victory.

In Division 1B, Shannon ended a two-game winning run with their 13 point victory over St Mary's College, who had began the day two places in front of them in the table.

In edging past Mary's, Shannon ended the Dubliners four-game winning run in the league.

St Mary's were leading 6-3 coming up to half-time when Shannon were awarded the game's opening try. Following an excellent spell of pressure, as the home side remained patient and accurate in possession of the football deep inside the '22, St Mary's infringed and the match referee awarded a penalty try.

Shannon led 10-6 at the break, as a result, but were pinged back early in the second half when Mary's winger Huge Conway touched down in the right corner.

To their credit, Shannon hit back once more, racking up 14 unanswered points to turn a one-point deficit into a 13-point winning margin.

Winger Ikem Ugwueru scored the first of the two tries after forcing a turnover just inside the St Mary's Half, while centre Pa Ryan added the second five-pointer in the 72nd minute.

Australian out-half Billy Gray converted both tries to bring his points tally for the game to seven.

In Division 2A, Old Crescent eased to an impressive 34-15 bonus point win away to Nenagh Ormond.

The Limerick side led 14-10 at half-time, but had stretched their advantage to 29-10 by the hour mark.

Both sides managed further tries before full-time as the Rosbrien side claimed a maximum five point haul.

Meanwhile, in Division 2C, Bruff had to make-do with taking a losing bonus point from their five-point defeat at Clonmel.

Bruff trailed 7-10 at half-time, with the Limerick side's try coming from John Cleary after the visitors had fallen 10-0 in arrears.

Kevin McManus added a second half penalty and drop goal to help the Kilballyowen side take a precious losing bonus point.