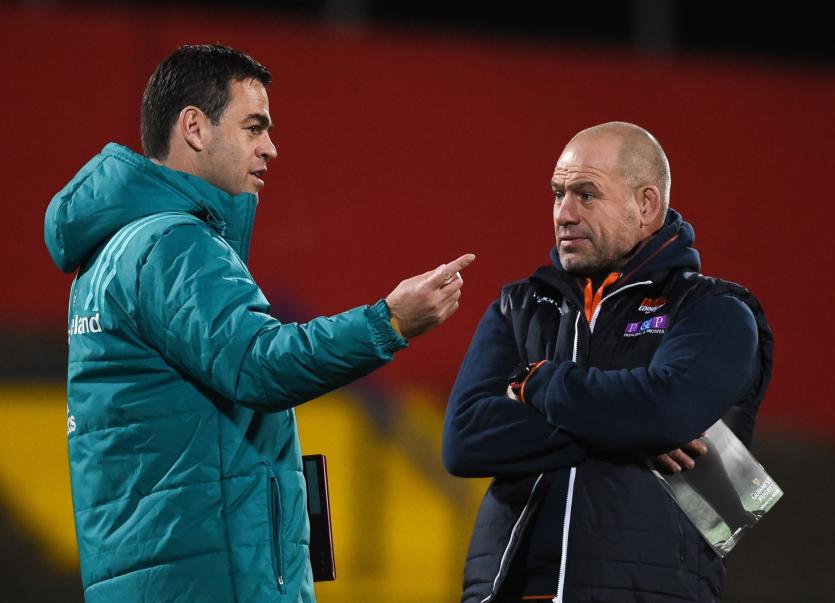 EDINBURGH head coach Richard Cockerill believes the mix of new forwards coach Graham Rowntree and senior coach Stephen Larkham is a perfect one at Munster with the game continuing to evolve.

Cockerill and Rowntree, who joined Munster in recent months after completing his time with Georgia, previously played together with Leicester Tigers and England.

Cockerill said of the province's new coaching ticket: “Johann (van Graan) is a smart coach, isn't he? He is the man who brings it all together. I am sure 'Wig' (Graham Rowntree) at one end won't want to do what Stephen (Larkham) does at the other end, but that is the perfect mix because Johann is smart and he will bring that together.

“Look, as you've seen they are playing more rugby, the game is evolving. Johann is a smart coach, a bit like ourselves at Edinburgh we are trying to evolve and play more.

“You have to be brave to do that as a coach and Johann has been brave by bringing Stephen in because it starts to break the mould, but that is the evolution of the game, isn't it? I think it will serve Munster very well.”

Cockerill said Munster were getting a forwards coach in Rowntree who knows what it takes to win, both as a player and a coach.

“Graham has come through the Leicester ranks the same as myself. The DNA of those two clubs are quite similar, I would imagine, so look, a hard edge, he knows what it takes to win as a player and as a coach. He's done that with England and he's done that with the Lions.

“He knows his set-piece. He is a hard task master and he drives a tough edge. You describe Graham and you sort of describe Munster at the same time, don't you, good set-piece, tough, hard works hard, good work ethic, all of those things, so 'Wig' is a good man, got a good manner about it and I think it is a really good match.

“They (Munster) are a great club, one day if we work really hard we would love to be as good as this club, so really happy with my players who did some really good things as well.”