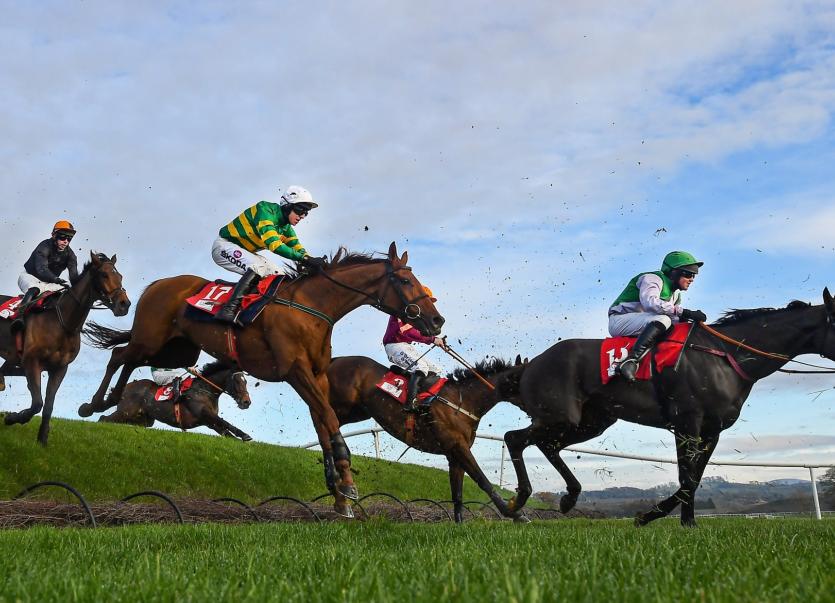 Yanworth, centre, with Mark Walsh on board, on his way to winning the Risk Of Thunder cross-country chase at Punchestown on Sunday

Having been forced out of the cross country chase at Cheltenham by very soft ground, JP McManus's dual Grade 1 winner was switched to the Risk of Thunder Chase here and showed no ill effects from his travelling as he won by a length and a half under Mark Walsh.

Yanworth was formerly trained in England by Alan King.

The nine-year-old bounced back from a below par showing at Listowel in September to oblige at Punchestown under jockey Mark Walsh.

Yanworth is a former winner of both the Christmas Hurdle at Kempton and the Liverpool Hurdle at Aintree.

A delighted Bolger said: "He had a small disadvantage, having gone to Cheltenham on Wednesday before getting back on Friday evening. We were worried when we were in Cheltenham with the amount of rain that was falling there.

"It's his first time around here today and he should improve a lot for it. He jumped well and had his ears pricked a bit coming up the straight. It was a proper race."

On future plans for the 5-6 favourite, Bolger added: "He'll probably go to Cheltenham in December, that would look the logical step."

Betfair reacted by cutting Yanworth to 6-1 (from 20) for the Glenfarclas Cross Country Chase at the Cheltenham Festival in March.