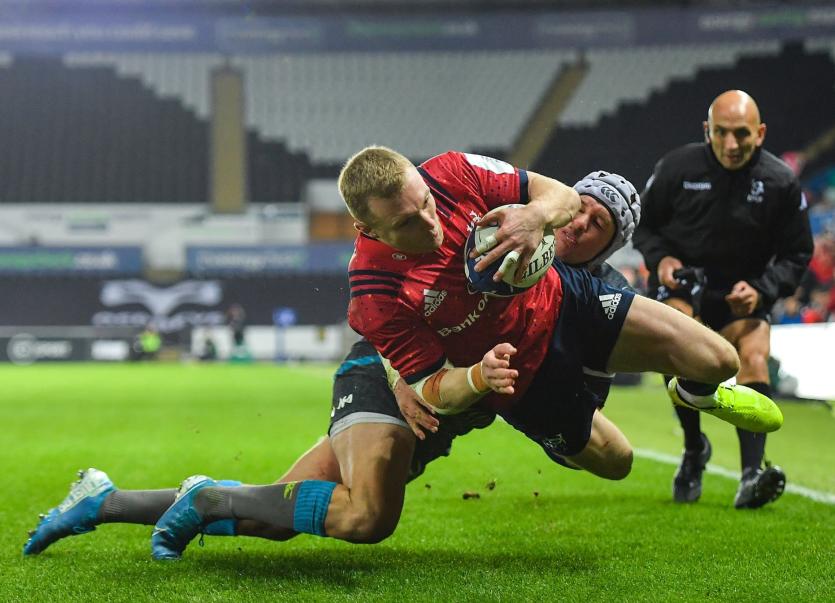 MUNSTER kicked-off their Heineken Champions Cup campaign with a 32-13 bonus victory over an out-of-sorts Ospreys side at the Liberty Stadium on Saturday night.

Cruciually, the visitors claimed a try bonus point with the clock deep in the red, which could yet prove crucial to their play-off hopes.

Replacement prop James Cronin dotted down on the back of a well-executed driving maul to ensure a maximum five-point haul from the visitors.

Given the teak tough nature of Pool 4 which also featured holders Saracens and French heavyweights Racing 92 who meet in Paris on Sunday, it was crucial Munster got their campaign off to a winning start.

And the two-time European Cup winners managed that as second half tries from Keith Earls, Andrew Conway and finally replacement Cronin were added to a close range effort from prop Jeremy Loughman who impressed on his first Champions Cup start.

While Munster had won five of their opening six Guinness Pro14 fixtures this season, in contrast, their Welsh opponents have managed to win just one of their outings.

Equally, while Munster have welcomed back their fit Ireland internationals from World Cup duty over the past two weekends, Ospreys are still without their marquee Welsh World Cup stars.

This was the fifth win for Munster in their six meetings with Ospreys in the European Cup and the away win stretched Munster's record of not having lost an opening round fixture in Europe since 2013/14.

Munster fell behind to an eighth minute penalty goal from Luke Price after the visitors were penalised for an off-side infringement.

Munster hit the front in the 19th minute when excellent work at the breakdown from number eight CJ Stander was rewarded when the home side was penalised for holding on. Bleyendaal made no mistake with the penalty shot from half way between the '22 and half-way line.

Find you a prop that thinks he's a fly-half @Munsterrugby's Jeremy Loughman with a magical left-handed pass as Andrew Conway is unleashed down the wing!

Munster continued to enjoy a good deal of possession through the opening 25 minutes, with the Ospreys tackle count up over 60 during that period, while Munster's was down at 16.

Poor discipline from Munster, as the visitors were pinged for a high tackle in the 27th minute gave Price the opportunity to kick the home side level and he duly obliged.

However, resilient Munster hit back just after the half hour mark. Following an excellent bout of controlled, composed phase play, Munster earned a penalty deep inside the Ospreys '22.

A driving maul in the 85th minute rolled over as @ospreys couldn't handle the pressure...

An alert Conor Murray took a quick tap penalty and while Ospreys repelled the initial onslaught, Munster's impressive loosehead prop Jeremy Loughman was driven over the tryline from close range.

Bleyendaal also converted to help Munster take a 13-6 lead into the half-time break.

Munster's impressive ability to retain possession throughout the opening half resulted in the Ospreys being forced to make a whopping 131 tackles in that opening period in star contrast to just 35 tackles by the visitors.

One wondered would the tackle count take its toll on the Ospreys' players and it did.

Munster stunned their hosts with two tries in three minutes, with Keith Earls dotting down superbly in the 48th minute and Andrew Conway following suit soon after.

A tight first 40 but @Munsterrugby take the advantage

The five-pointers left Munster 25-6 to the good and chasing the bonus point over the remainder of the game.

Munster added the bonus point try late on, while the Welsh region scored a consolation five-pointer from Aled Davies in the 78th minute.