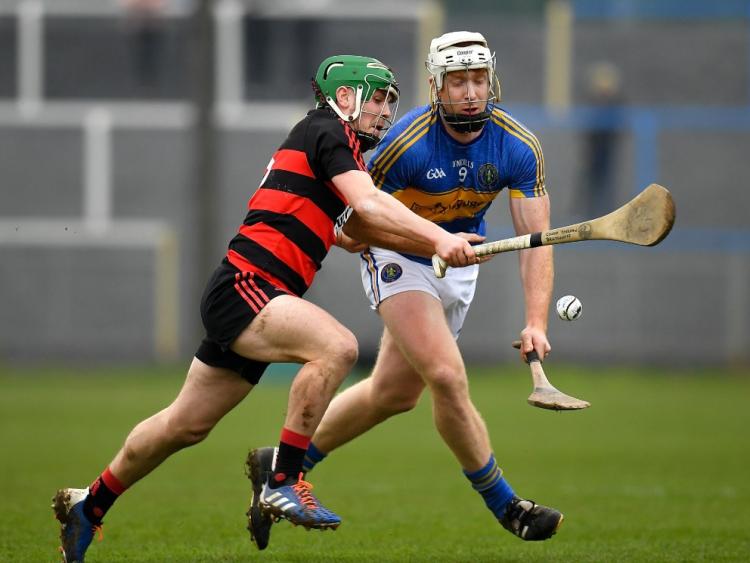 Cian Lynch of Patrickswell in action against Conor Sheahan of Ballygunner

The Ciaran Carey managed side lost 0-17 to 0-9 to reigning provincial champions Ballygunner in Waterford's Walsh Park.

The six-in-a-row Waterford champions dominated the second half to reach a Munster club SHC final with Tipperary's Borris-Ileigh.

After battled back from a poor start to trail by just a point at half time, Patrickswell scored just three times in the second half.

Patrickswell lined out without long serving goalkeeper Brian Murray due to injury. This saw forward Jason Gillane start in goals rather than his usual full forward line role.

It was Ballygunner 0-7 Patrickswell 0-6 at half time.

It was a half that the home side dominated for long periods but The Well hit five of the final six scores in the final seven minutes.

Ballygunner, who had 12-points to spare over Sixmilebridge in their quarter final one week previous, hit the ground running and had four points scored inside the opening 14-minutes.

Dessie Hutchinson led the way with four points from play in the first half for the men in red and black.

It was 19-minutes into the tie before Patrickswell opened their account.

They had five wides before an Aaron Gillane free had them on the scoresheet.

They also went close to goal - Cian Lynch had a fifth minute drive for goal saved and a rebound shot from Andrew Carroll was blocked.

The first Patrickswell score from play came in the 25th minute from Aaron Gillane and it was to start their late charge towards half time.

Gillane added another when he forced a turnover and then John Flynn pointed.

Gillane's injury time free ensured just a point between the teams at the break after a half where The Well registered seven of the 12 wides.

Again Patrickswell were slow to find scores in the second half.

Four Michael Mahony points from play for the Waterford champions were the only scores of the first 12-minutes to leave Ballygunner 0-11 to 0-6 ahead.

Finally in the 13th minute a Gillane free reopened the Patrickswell account.

But the Ballygunner scores continued to come with Barry and Shane O'Sullivan on the mark to lead 0-15 to 0-7 inside the final 10-minutes.

Twenty three minutes into the half Jack Kelleher had the first Patrickswell score from play in the half.

Kelleher added another but there was no way back for The Well.

* See the print edition of the Limerick Leader for a full match report and reaction.