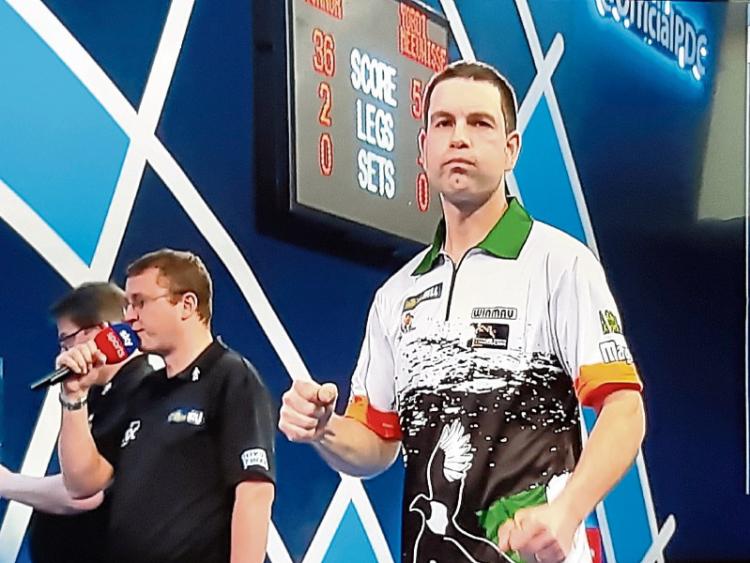 LIMERICK man William O'Connor made a thrilling winning start to the stg£550,000 BoyleSports Grand Slam of Darts in his opening group match in Wolverhampton on Saturday night.

Thirty three-year-old Cappamore man O'Connor opened the Group D action at the prestigious event with a 5-3 win over Darren Webster, who came through Monday's qualifier to secure a return to the event.

Webster led 2-1 and 3-2, but saw Cappamore man O'Connor level before breaking throw in a key seventh leg with a 92 finish, before closing out victory on double ten in front of the Sky Sports cameras.

Nicknamed 'The Magpie', O'Connor, who currently has a world ranking of 41, admitted after his win that it meant a lot to him.

O'Connor admitted he had gotten annoyed early on in the match to see water spilled over his darts case.

"It meant a lot. Early on, I got a bit annoyed. I looked back and my darts case and everything was covered in water," the Limerick man told Sky Sports.

"He spilled water all over my stuff, it annoyed me early on and it showed in that first and second leg.

William O'Connor isn't best pleased with Darren Webster after that one...

"I had been playing great darts back stage. I tried to put it behind me but it really bugged me that he poured water all over my stuff.

"Whether it was done on purpose or not, it was a fact that it happened and it effected me in the middle of my game. It shouldn't have happened.

"Look, I want to come out of my group, I know I got the darts to do it. I am practicing well, been playing well the last while, I have the beating of all of these guys.

Look how much that meant to the Irishman! William O'Connor defeats Darren Webster 5-3 with a 100 average!

"I just have to go up and do it. At the minute my practice is going well and I have the confidence to do it. I think I will do it and I think I will come out of my group.

The BoyleSports Grand Slam of Darts tournament carries a first prize of stg£125,000.

Brilliant break of throw from O'Connor who is now throwing for the match! pic.twitter.com/u00bHqGRz4

The 13th staging of the cross-code event will see stars of the PDC and BDO going head-to-head across nine days of action from November 9-17.