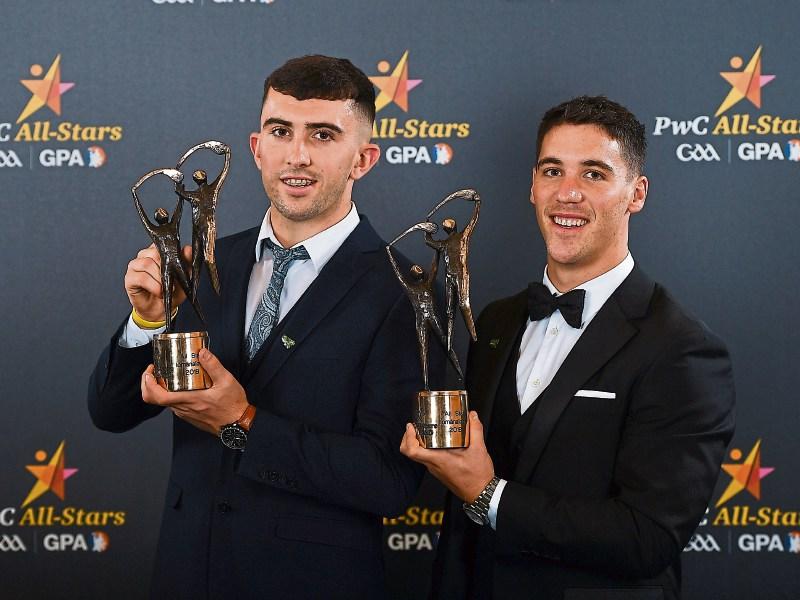 Limerick hurlers Aaron Gillane, left, and Seán Finn with their PwC All-Star award at the PwC All-Stars 2019 at the Convention Centre in Dublin Picture: Seb Daly/Sportsfile

All-Ireland medals and All-Stars were in short supply in Limerick for many years but thankfully over the last few years much has changed.

Success at U-21 and senior has seen a dramatic rise in confidence, acknowledgment and ambition. Last weekend Sean Finn and Aaron Gillane were rewarded for their years efforts when both were chosen on the All-Star team for 2019.

For the players, families and clubs involved it’s a great personal honour. For Aaron Gillane it’s his first All-Star but it’s two in a row for Sean Finn.

Both players had a very good year and it says a fair bit about their performances when they managed to make it into a very strong team. Limerick might have hoped for at least one more but as it was for them last year the All-Ireland champions will always have the most allocations.

Limerick looked on a roll when winning the National League and sweeping past Tipperary in the Munster final but that opening twenty minutes against Kilkenny will hang with them for a long time.

Other Limerick players had a very good year but missing out on the All Ireland final meant they had little chance in the final selection.

Limerick are currently blessed with many top players and it’s great to see them acknowledged on the national stage. Limerick has a very proud history of producing some of the greatest players to ever play the game. Many greats have won All Star awards which officially started in 1971. Prior to the All Stars the GAA had the Chulainn awards.

Kevin Long and Bernie Hartigan were the first Limerick players to receive such awards in 1963. Pat Hartigan won his first All-Star in 1971. The judges at the time said of Hartigan, “was a mainstay in Limericks resurgence in 1971. He was unyieldingly and showed unique stubbornness.”

Hartigan would go on to win many more and was regarded as one of the all time great defenders. Eammon Cregan who to me was the greatest Limerick hurler I saw won his first award in 1972 while Pat Hartigan was again rewarded.

The most decorated Limerick player from an All Star point of view was Joe McKenna. In total he won six All-Star awards and in doing so became one of the greatest full forwards to ever play the game.

He won his first award in 1974 but as the years progressed he became a lethal goal scorer. He’d climb for the ball, pull it out of the sky then turn and strike all in the one movement. It set him apart and in so many ways. Limerick never really found a full forward to match what McKenna had to offer.

We had such a great mix of players that won awards. I think of the great Sean Foley. He was honoured in 1973 at left half back. Sean Foley was a class hurler, a man of few words, it was always more action than words from him.

His club man Richie Bennis was also honoured in 1973, the judges said of Richie, “It was his level headiness in the tightest situations that set him apart.” As a free taker Richie Bennis proved himself time after time for Limerick.

Jim O’Brien of Bruree was also an award winner in 1973. The judges said, “he showed rare bravery and mobility.” In more modern times we had players like Gary Kirby and Ciaran Carey of Patrickswell.

I can remember well when Tommy Quaid won his award in 1992. It was long overdue and it was of great personal satisfaction to him and his family.

All-Star award nights were far less flash those days. I can remember being in the Burlington Hotel a good while before the event started. Tommy was unsure and nervous. Liam Fennelly from Kilkenny came over to us and while the team was to be a secret and only announced from the stage he put Tommy at ease when he told him he had won the goalkeeping position.

On the night he was a very popular winner, a man that had given so much to his club and Limerick. Limerick won a great league final against Tipperary that year. They were ten points down at half time and went onto win when Ray Sampson flicked a ball to the net. Limerick lost the Munster final to Cork.

Aaron Gillane is an example to many that you don’t have to have a glittering underage career. His development took awhile to engage but when it did he took off. The Patrickswell man has that bit of magic, he has great hands, a turn as sharp as a knife and a great eye for opportunities.

His goal in the league final against Waterford was indeed special. He has so much more to offer his club and Limerick and with age very much on his side we are going to see much more from him.

He had a great year with Limerick and also with his club. He had to come back from injury but every day he goes out he will be the source of much attention. Next Sunday he will once again be a key man for his club as they face Ballygunner in the Munster club semi final.

Around Bruff they call Sean Finn, “Seanie Medals” such is his collection of medals with Limerick. He has them all. The complete collection in Munster and of course an All-Ireland senior medal. As corner backs go Finn is up there with the best of them.

Last weekend saw him win his second All-Star in a row. That shows consistency and a huge level of performance in the modern game.

The first few steps are vital for defenders and Sean Finn has that mastered. His reading of the game makes him one of the best corner backs in the game right now.

Limerick senior hurling champions Patrickswell will have their hands full next Sunday when they travel to Walsh Park in Waterford to face Ballygunner in the Munster Club semi final.

Ballygunner were very impressive in the way that they blew away the tame challenge of Sixmilebridge last Sunday. More was expected from Sixmilebridge but they simply never matched the quality that Ballygunner had to offer.

Ballygunner have dominated Waterford club hurling over the last few years and they are a very seasoned outfit. Patrickswell will need to take every opportunity, they will need to close space and avoid making mistakes because few teams are more equipped than Ballygunner to take advantage.

Winning on the road is never easy in the club championship but Ballygunner have proved they can do it at home and away. For Patrickswell it’s about setting the pace, they will need to go at Ballygunner early and often if they are to get the result they want.

Big performances for their key men will be vital and if that happens they will have a good chance.

As expected Blackrock left all that they had on the field against Fr O’Neill’s of Cork in the opening round of the Munster Intermediate championship. Blackrock showed some steel to take the hot favourites to the wire. When one considers Blackrock had only a few days to recover from the drawn county final their performance was all the more exceptional.

On reflection Blackrock can look back on a great year. Winning a very competitive championship in Limerick and a return to senior status is a very rewarding year by any standards. I was covering a game elsewhere but so many people praised the way the Blackrock club managed the entire event.