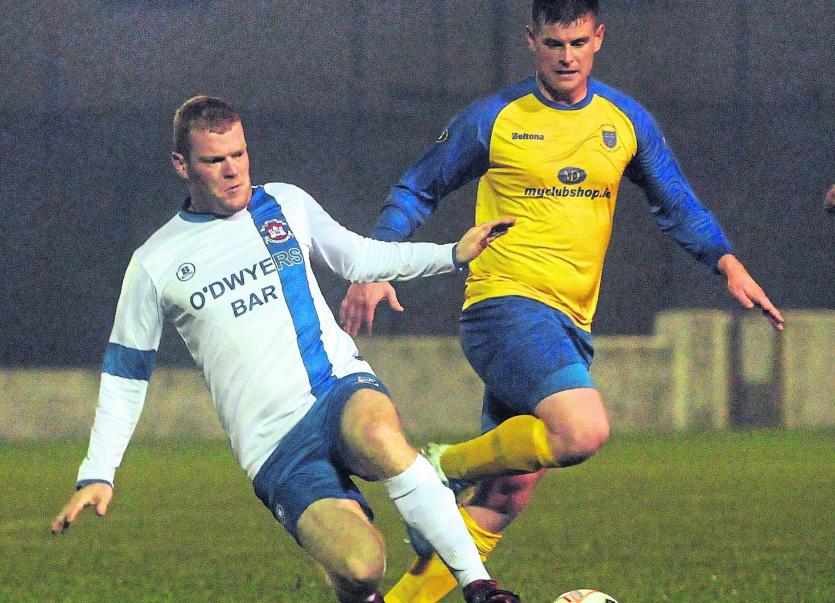 Aisling Annacotty made it through to Round Four of the Munster Junior Cup with a hard earned win over a battling Newport side at a wet and windy Annacotty on Saturday evening.

The Premier outfit were ahead all the way through but despite having enough chances to have killed the game off, could not seem to secure the game, and with Newport biting at their heels, were never able to relax.

Aisling had the perfect start taking the lead after five minutes. A superb passing move from back to front ended with Conor Coughlan attempting to drill a ball through a crowded goalmouth. The Newport defence got a block but Aaron Murphy reacted quickest to swivel and volley the rebound home from 12 yards.

A blistering run by Kennedy N’Dip saw the defender get in along the Newport end line but his shot from an acute angle missed the far post narrowly.

At the other end the impressive Jake Dillon played Brian O’Sullivan in behind the Aisling defence but his shot from the left was well saved by Brian O’Connor in the home goal. From the resultant corner kick Jimmy Fyffe headed inches over the top.

On 35 minutes Eoghan Burke’s clever ball found Murphy in the area and when his advance was blocked the ball fell to Coughlan but his goal bound shot was blocked by the legs of Harry Ryan in the Newport goal.

Paudie Walsh crossed for Burke but his header was straight at Ryan and another good run by Walsh saw him pull the ball back across goal but the inrunning Shane Donegan was unable to keep his effort inside the posts.

Just before the break Paul Ryan set up an opening for Brian O’Sullivan but his touch on this occasion wasted the chance.

Despite their dominance Aisling had just the one goal to show at the break and on the turnover they continued their search. Thomas Clarke headed powerfully over from a Brendan O’Dwyer corner kick and Coughlan played Murphy clear with a sublime pass but the striker’s touch past the keeper rolled narrow;y wide of the far post.

Aisling got their reward on the hour mark. Nathan O’Callaghan’s long ball was cleared but only as far as Donegan who headed behind the defence and followed up before lobbing the advancing Ryan for an excellent goal.

The game seemed to be going to script for a couple of minutes until Newport were awarded a free kick on the left and Kevin O’Brien’s delivery was met by Peter O’Sullivan who put a glancing header beyond the reach of O’Connor into the net.

Aisling’s response was rapid. A good chase by Walsh saw him upended in the area by Ryan and from the resultant spot kick O’Callaghan fired home.

Newport were still not finished and Jake Dillon drilled a low shot to the net to set up an exciting finish.

However it was the home side who got the crucial score, O’Callaghan firing a 25 yard free kick to the net for a superb goal.

Aisling will be happy with the result. They welcomed Evan O’Connor back to action after a long term injury and he will add further to an already strong panel.

Regional Utd B will be one of Limerick’s seven representatives in the open stages of the Munster Junior Cup following their 4-0 win over Northside in Dooradoyle on Saturday evening.

Regional have been a revelation this season after a couple of forgetful campaigns.

They lead the way in Division 1B and now have the added bonus of a potential prolonged MFA run.

They did the business on Saturday but the scoreline does not reflect the battle Northside put up.

The opening 30 minutes was a very tight affair and the Division 2B side would have taken the lead but for a fine save from JJ Hartigan to deny Ray McMahon.

Just before the break the home side took the lead when Eoghan Killian’s long range effort found the net.

The second half continued in much the same vein until a solo effort from Sam Gleeson made it 2-0.

With the visitors forced to chase the game Regional tacked on another couple of goal through Eoghan Killian, with his second and Ian Downes to secure passage to Round Four.

In 2B League leaders, Aisling Annacotty D opened up a five point gap at the top of the table following a an extremely competitive game against a good Brazuca side in UL.

Aisling have a number of players in their squad with Premier experience and are favourites to top the table but they were rocked back on their feet when Brazuca took a deserved lead on the half hour through Maicon Morelli.

Aisling responded well and a goal from Bradie Flynn had the sides level at half time.

It was a closely fought second half but Aisling came out on top and Craig Downes struck a deserved winner for the away side to move five points clear of second placed Fairview Rgs C.

Charleville leapfrogged Cappamore into fourth place in the Premier A league with an impressive win on Saturday evening.

Charleville have a young squad this season and are beginning to find the form that could see them challenge for a place in the top flight and now lie just two points behind second placed Murroe.