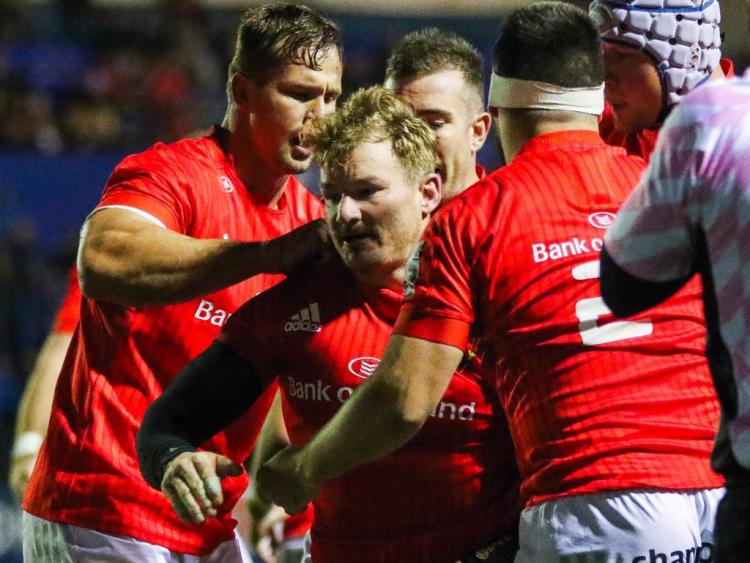 Munster try scorer Chris Cloete, centre, is congratulated by his team mates after dotting down in their Guinness PRO14 clash with Cardiff Blues at the Cardiff Arms Park on Saturday night

CLINICAL Munster secured a maximum five-point haul in the Guinness PRO14 on Saturday night when easing past the Cardiff Blues 33-23 at a wet Cardiff Arms Park.

The bonus point win was the ideal boost for Munster ahead of the return of their 12 Ireland internationals from World Cup duty to the squad on Monday as well as crucial upcoming fixtures against Ulster next Saturday in the Pro14 and the Ospreys in the Heineken Champions Cup in two weeks' time.

Visitors Munster ran in four tries in all, including two in the second half from their vastly experienced All-Black scrum-half Alby Mathewson to seal an impressive victory.

The sides had been tied 13-13 at the end of the opening half. Munster managed one try in the opening half through South African flanker Chris Cloete on 23 minutes, while out-half JJ Hanrahan added a conversion and two penalty goals.

Home side Cardiff, who had lost their three Pro14 fixtures prior to kick off, hauled themselves level at the break when prop Corey Domachowski dotted down just before the break.

Munster stunned their opponents with three second half tries from Mathewson on 47 minutes and 66 minutes, while Limerick winger Calvin Nash also crossed the whitewash in the 59th minute as the visitors eased clear.

Munster, who were claiming their first win at the Arms Park since March 2017, have now lost only one of their last seven fixtures with Welsh opposition.

The game saw a welcome first start since March for Munster winger Alex Wootton who has recovered from an unfortunate knee injury.

Munster’s Johann van Graan rung 11 changes to the side that defeated Ospreys last time out for Saturday night's game with only the quartet of Jack O’Donoghue, Dan Goggin, Calvin Nash and Shane Daly retaining their places.

It’s been a real arm-wrestle at Cardiff Arms Park so far, but Chris Cloete drives over to put @Munsterrugby ahead

Sammy Arnold made his first start of the season as he joined the impressive Goggin in midfield.