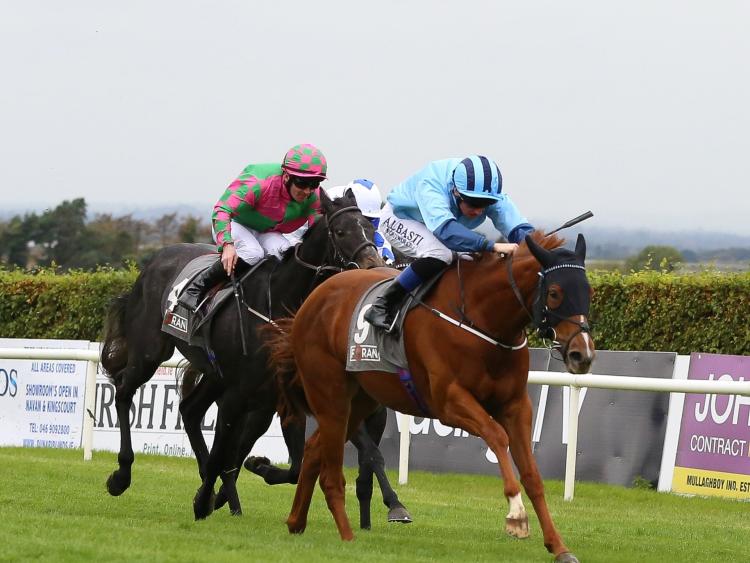 LIMERICK jockey Chris Hayes, from Shanagolden, is enjoying another terrific year and he helped himself to his 53rd success of the season at Navan.

Hayes teamed up with Sheila Lavery to land the valuable Foran Equine Irish EBF Nursery Handicap on 14-1 outsider Half Nutz.

Talented horseman Hayes made his move down the middle of the track and powered up the punishing hill at Navan to get the better of In From The Cold by a length and a half on Wednesday last.

Meanwhile, Ballydoyle are preparing a three-pronged attack in a bid to land a first Lexus Melbourne Cup on Tuesday week with Aidan O’Brien leaning towards trying Cox Plate fourth Magic Wand over two miles for the first time in the $8m showpiece at Flemington.

Magic Wand was beaten four lengths by Japan's Lys Gracieux in the Ladbrokes-sponsored Moonee Valley feature on Saturday and boasts winning form over 1m4f courtesy of victory in the Ribblesdale at Royal Ascot last year.

A five-time runner-up in top-level company, Magic Wand is a general 33-1 to land Australia’s most high-profile race, while Hunting Horn was shortened to 20-1 (from 66) following his win in Saturday’s McCafe Moonee Valley Gold Cup.

St Leger fifth Il Paradiso will head straight to the race and is pleasing the O’Brien travelling team. Wayne Lordan is set to ride Il Paradiso, while Ryan Moore will partner either Hunting Horn or Magic Wand in the Melbourne Cup, for which third acceptances close on Monday morning.

July Cup hero Ten Sovereigns remains in quarantine in Sydney following his below-par effort in the TAB Everest and is entered in Saturday’s inaugural Golden Eagle at Rosehill along with stablemate Never No More.

Regan will join master of ceremonies, David Jennings, deputy editor of the Racing Post in Ireland, at the event which sees racing’s backing singers take to the stage.

Regan has been performing stand-up for more than ten years, with multiple television credits including Tonight At The Palladium, Russell Howard’s Good News and Stand Up Central. Having grown up on the Curragh, Regan has a strong association with racing.

Across two decades his father Thady trained multiple winners from the family’s Mooresbridge Stables. While Jarlath opted for a life on stage, his brother Adrian stuck with the family business and now owns and operates the successful Hunter Valley Stud in Kentucky with his business partners.

The comedian said: “Growing up in a racing yard, I’m acutely aware how fundamental stud and stable staff are to Irish racing and breeding.

"Their hard work, dedication in all weather and unique horsemanship skills have significantly contributed to many Irish racing success stories at home and abroad.”

He added: “I’m really looking forward to meeting all the Godolphin Stud and Stable Staff Awards finalists in Killashee Hotel next Tuesday night.”

Next Tuesday will see more than €80,000 in prize-money distributed across ten different categories.
The Irish Godolphin Stud and Stable Staff Awards will be streamed live and will begin once the awards ceremony is under way at about 9:15pm.

It can be accessed through www.studandstablestaffawards. ie.