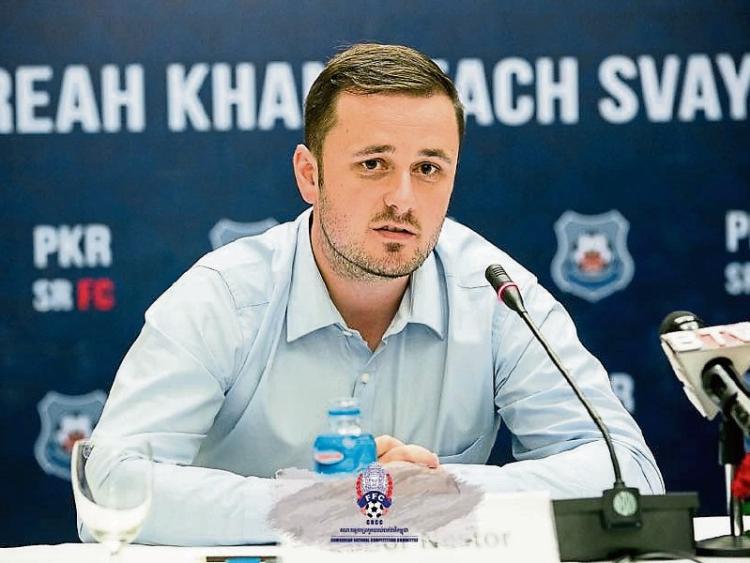 Last weekend, Foynes man Nestor guided the club to stunning league success. It has been a whirl-wind time for Nestor.

You were appointed to the manager’s job in February 2018. How did that first season go?

CN: “Our 2018 season was a baptism of fire. About seven games in we had a fight on the pitch which escalated into a riot. Half season bans followed for half of our team and the season descended into farce from a results view point.

“The biggest mistake I made when first arriving was I listened too much. When you can’t speak the language and are learning about the culture of a new country you are conscious of adapting. In hindsight, I adapted to the point of not insisting on certain principles and values that I felt a football team must have.”

Culturally, did it take you long to settle into life in Cambodia? How did you handle the climate, language, etc?

CN: “Phnom Penh is your stereotypical Asian city, congested, polluted, noisy, chaotic. So it takes time to adjust and find your feet, but its actually a nice place to live when you do adjust and the people are very warm.

“Nine months of the year its dry and sunny, anything from 30-40 degrees and then for three months its rainy season, which actually normally means an hour of torrential rain a day but then the sun splits the rocks for the rest of the day.

“Language wise a Cork man by the name of Conor Wall translated for me last year. We hired him as a video analyst and because he has lived here over a decade and is a fluent speaker he used to translate for me. He was an amazing help from day one. Now I am studying the Khmer language as Conor has gone back to working as a photographer, the pronunciations are extremely difficult.”

When did you start thinking the side could win the league?

CN: “After our very first game, we won 2-0 against Police FC but we didn’t concede a shot on goal. We controlled the game from start to finish. This doesn’t typically happen in Cambodian football, as most teams tend to have 15 minute periods where they leave their shape and structure. I had a feeling then and there that we had what it would take, but doing it is another story.”

What do you put the improvement in form in 2019 down to?

CN: “Having our best players on the field regularly added to some key signings in the off season.

“Jonny Campbell, an American central defender helped tighten up our defence, we had an English man named Charlie Machell who came via the Danish First division and scored some crucial goals from midfield. Then there was Jean Marie Privat Mbarga, from Cameroon, who is the league's top scorer and has been a real difference maker for us.”

Was it difficult to handle the pressure which comes from being the league's front runners?

CN: “The difficult thing was managing the international breaks as they interrupted our season at critical points. You always worry when the season breaks that it may break your momentum but mentally the group have been excellent taking each game at a time. We have gone 32 games unbeaten in all competitions, a run going back to our last three league games of 2018, not wanting to break our run has helped us motivationally to keep going.”

How relieved were you to claim the title last weekend?

CN: “I was beginning to sound a bit like Trapatonni over here, ’the cat was in the bag but the bag wasn’t closed’! We have a cup final on November 6, getting the league done and dusted is a massive relief because it means those in need of a rest can get it before we try and complete the double.”

How many fans were at the last game and was it live on TV?

CN: “We had 2,400 there on Sunday we get the trophy this Sunday and a former player of mine from Shannonside FC Dara Fennessy will be there with the tricolor, Dara is the son of John Fennessy who I would have coached with in the Desmond League.

“140,000 watched the game live on Facebook and the game was aired on BTV a national broadcaster, it would be one of the top broadcasters here.”

Just how significant is the league win for the club? Do you get to play in an Asian Cup representing Cambodia, similar to the Champions League in Europe?

CN: “The AFC Cup would be the Europa League of Asia if you like. We are awaiting confirmation if we go into the group stages or we have to go through a play-off.

“It depends on who wins the title in Laos. No Cambodian club has ever got out of the group stages, so that’s a marker for us, it will be a tough task but we will give it a lash.”

Where does this rank among your achievements in football?

CN: “I was very fortunate during my time with the FAI to work with many players who went on to have big careers. I was very proud to work with Tommy Barrett and Derek McCarthy when the Limerick FC u19s won the elite division in the League of Ireland a few years back.

“But without question this is my biggest achievement because you have to manage people from various countries alongside national team players who are famous here and ultimately you are responsible for the direction of other peoples careers and livelihoods. So to win the league here has been really special.”

CN: “I signed a new two-year contract mid-season. We have signed all our local players to long term deals, we have new sponsors coming in, plans for the stadium to develop.

“I don’t want to be anywhere else, my bosses backed me when things were not going well, I want to play my part in building something here that the Cambodian people can look upon as a source of pride.”

What are your longer-term ambitions in football?

CN: “My ambition in the medium term is to build the infrastructures around the club here that will make repeating our success each year more likely. That means improving the medical department, Sports Science and analysis etc.

“We hired an assistant coach called Colum Curtis, from Belfast, recently our task now is to build a club that will be sustainable and successful long after we are gone.

“In the long term I’d love to come home and coach at the top level but I believe that’s a really long way away because the professional football industry in Ireland is not really a dependable industry to be in unless your at a handful of the top clubs.”