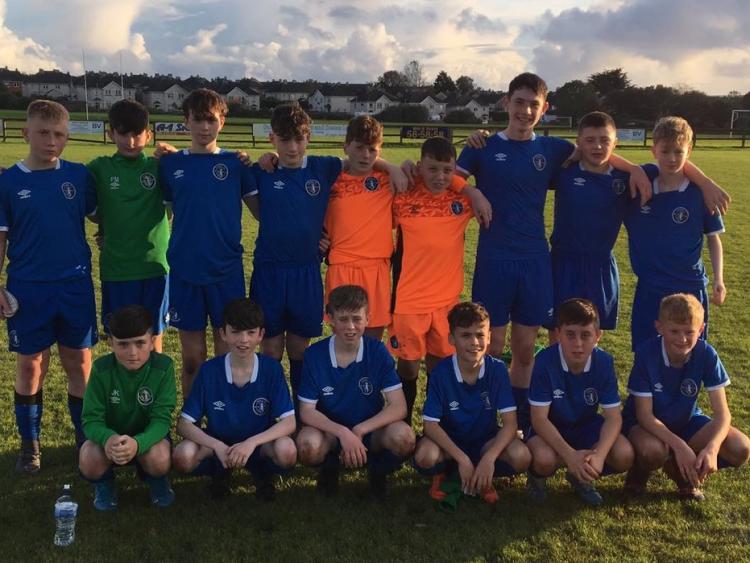 LIMERICK FC U13s powered their way into the semi-finals of the SSE Airtricity U13 League Cup after scoring a deserved 2-1 victory over Galway Utd at East United's grounds on Saturday.

Limericks U13 side will now face Munster rivals Cork City in the semi-finals of the League Cup.

The first 20 minutes of the tie saw Limerick have more of the ball and create a number of opportunities as Cillian Mulvihill struck the crossbar. Fintan McNamara saw his header go just past the post, while both Kian Kelly and Jamie Long had attempts just go over the crossbar.

Limerick centre back Aidan O'Shea was a threat as his dribbling from deep was causing Galway a lot of problems.

Galway grew into the game and started to create opportunities of their own as they had an effort also hit the crossbar while seeing a couple of efforts just go past the post.

Galway thought they were about to take the lead as they counter attacked really well after defending a corner kick as their striker was through on goal, but Conall Casey provided a brilliant last ditch tackle to deny the home side.

The remaining stages of the first half saw both teams continue to attack as the Blues went into the break with a 1-0 lead.

The second half would see Limerick control more of the game as Tom Healy was very efficient in his midfield play while in defence Robbie Lynch and Aidan O'Shea were dealing more effectively with Galway's attack as they struggled to break through.

Limerick were looking dangerous in attack as they had opportunities to pull away and would finally see their play rewarded
as Tom Healy played a through ball to Cillian Mulvihill just outside the box, who spun away from the defender, before striking the ball into the top corner of the net.

Galway rallied and their persistence was rewarded when a well executed strike from their striker flew into the net.

The Westerners went in search of an equaliser, but Limerick reacted really well as they managed the game with Fintan McNamara's energy proving a lot to deal with in attack and defence.

Limerick saw the game out and claimed a 2-1 victory, qualifying for the National League semi-final with every player involved contributing to a brilliant result.

The fixtures details for the Munster derby semi-final showdown with Cork City will be confirmed in due course.