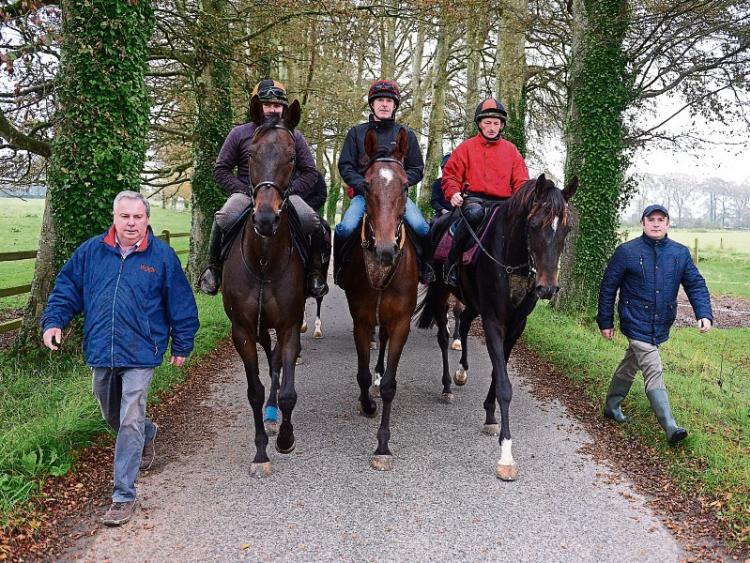 THE €100,000 JT McNamara Ladbrokes Munster National takes centre stage at Limerick Racecourse this Sunday, the second day of a big two-day weekend of racing at Greenmount. The prestigious Grade A contest, due off at 4.35pm, was won by Spider Web and Luke Dempsey in 2018 in the colour of JP McManus for trainer Thomas Mullins.

Sunday is also James Barry Motors  Ladies Day with a SEAT Ibiza to be won for the year to include road tax.

The Tom Mullins-trained Spider Web came from well off the pace to win the top prize under Luke Dempsey 12 months ago.

Three trainers with previous wins in the race filled the placings last year.

The trio are well represented again this year with Elliott responsible for five entries, including the smart novice Dinons and Saturday’s Navan winner The Big Lense, while McNamara can also call on Internal Transfer, a three-time Limerick winner.

Eric McNamara commented: “Internal Transfer ran a very good race when fourth in the Kerry National – he just got a bit tired in the straight, but I was thrilled with the way he jumped and travelled.

“That was his first run of the season and with normal improvement I’d be expecting a very big run from him. He has won three times around Limerick so he clearly likes the place and I’ve been very happy with him since Listowel.

“Black Scorpion ran well over an inadequate trip at Listowel. He needs every yard of three miles-plus nowadays and he has come for that. He ran well in this race last year and he is in good form and as I said, the step back up in trip will be a big plus for him.”

Willie Mullins sent out Total Recall to win the JT McNamara Ladbrokes Munster National in 2017 and has made three entries including Some Neck and Cabaret Queen, the latter making a promising debut for the champion trainer when runner-up to The Big Lense at Listowel.

Other interesting entries include the Movewiththetimes, trained in Bruree by Enda Bolger, who was sent off the gambled-on favourite for the Kerry National in Listowel last month only to finish down the field.

The JT McNamara Ladbrokes Munster National is due off at 4.35pm. The opening contest on a very attractive seven-race National Hunt card goes to post at 1.45pm.

Saturday’s card at the Patrickswell venue is an all flat event with 7 races to include the Martin Molony Stakes listed race of €45,000 which was won by Joseph O’Brien in 2018.

The opening race at Limerick Racecourse on Saturday is due off at 2pm.