WATCH: How the Limerick sides fared on dramatic opening day in All-Ireland League 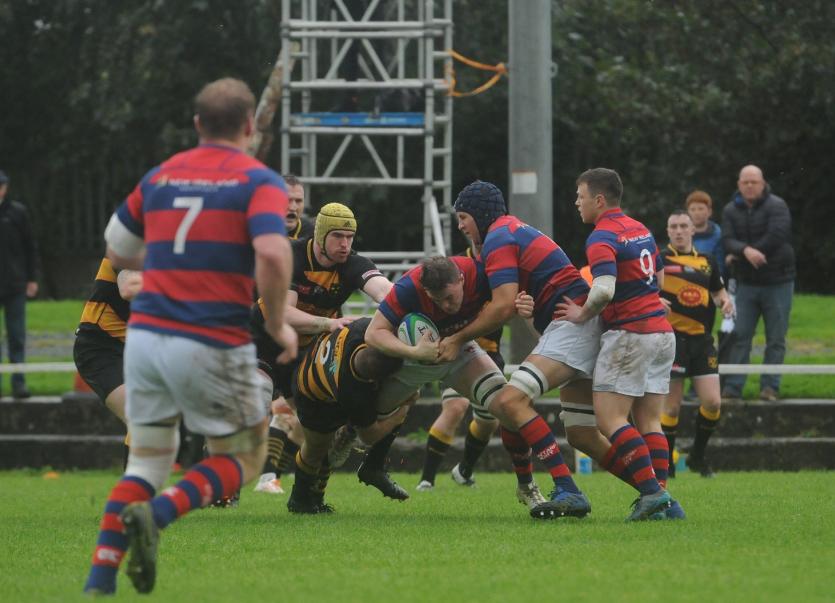 THERE was just one Limerick win on a dramatic opening Saturday of action in the new Energia All-Ireland League season.

Narrow and frustrating defeats were the order of the day for the three Limerick clubs competing in Divisions 1A and 1B.

In the top division, Young Munster suffering a bitterly disappointing 7-6 home defeat to Clonatrf at a wet Tom Clifford Park, while Garryowen's hopes of getting their campaign off to a winning start were dashed late on when a dramatic late penalty goal helped champions Cork Constitution close out a narrow 14-13 victory at Temple Hill.

Meanwhile, in Division 1B, Shannon, who were relegated from the top flight at the end of last season, fell to a 22-20 defeat to Old Belverdere on the back pitch at Thomond Park.

The only Limerick side to record a win on Saturday was Bruff, who kicked off their campaign with a dramatic 18-17 victory over hosts City of Derry in Division 2C thanks to a last gasp converted try.

A minute's silence was observed at Clifford Park prior to kick-off in Young Munster's clash with 'Tarf as a mark of respect to the late Gerry Prendergast, father of current Munsters' head coach Gearoid.

In persistent drizzle, visitors 'Tarf enjoyed the lions share of possession and territory in the opening quarter, but Munsters' defence proved well up to the challenge.

The Dubliners included a familiar face at out-half, Limerick-born out-half Gearoid Lyons, who enjoyed a stint at Clifford Park as well as Munster in the past and who has moved to Castle Avenue from English Championship side Nottingham Rugby during the summer.

Neither side managed to score a single point in the greasy, slippery conditions in the opening half as defences held sway.

WATCH: Crucial free kick awarded to @YoungMunsterRFC from scrum deep inside their '22 as 'Tarf desperately seek way back into the contest. Munsters lead 6-0 after 69 mins in AIL 1A #LLSport #EnergiaAIL pic.twitter.com/WUqZBcDvJt

The deadlock was finally broken in the 44th minute when Munsters' out-half Evan Cusack kicked the home side into a 44th minute lead from a penalty. The former Thomond playmaker added a second penalty in the 55th minute for a 6-0 lead.

However, Munsters' picked up two yellow cards in the final quarter and the visitors took advantage when replacement Tadhg McElroy dotted won in the 71st minute, while full-back Sean Kearns added the match-winning conversion.

Meanwhile, in Cork, Garryowen led Con 6-3 at half-time at Temple Hill. The 'Light Blues' had two first half penalties from full-back Jamie Heuston.

A Greg Higgins try and penalty goal for Cork Con from Aidan Moynihan, who defeated Garryowen in the semi-final of the Munster Senior Cup just two weeks ago, had the home side 11-6 to the good on the hour mark.

However, the complexion of the game changed again when Tommy O'Hora darted over for a 76th minute try for the Limerick side which Heuston duly converted for a 13-11 advantage.

However, ultimately Garryowen had to make-do with taking a losing bonus point from the game as a late penalty from out-half Moynihan, his third of the game, secured victory for the Leesiders.

Meanwhile, Shannon RFC's return to life in Division 1B got off to a disappointing start with a narrow 22-20 defeat to Old Belvedere at a rain-swept Thomond Park back pitch.

An early Billy Gray penalty gave Shannon an early lead but Belvedere responded well and went 7-3 ahead thanks to a James McKeown converted try.

Shannon got a try of their own when Pa Ryan got on the end of a blocked clearance to edge The Parish side ahead at 10-7.

Minutes before the break, Crosbie kicked over his third penalty of the afternoon to make it 16-10 to the Dublin side.

Shannon had a try disallowed on the verge of half time for a double movement offence.

Shannon narrowed the deficit to three points minutes after the restart following another penalty penalty from Australian-born Gray.

Minutes later, Crosbie put nine between the two sides with his fourth and fifth penalties of the game.

A late Colin Slater converted try, following a maul off the end of a lineout in the corner, wasn't enough as Shannon succumbed to a 22-20 loss to the determined Dublin side.

In Division 2C, Bruff made their long trip to City of Derry a successful one after scoring a dramatic one-point win at Judge’s Road.

First outing in the AIL for the Wild Colonial Boy. pic.twitter.com/CiFzUO70L4

After City of Derry had taken an early lead, Bruff hit back with a Liam Treacy try off a well-executed maul. A second Bruff try from Sean Hartigan and converted by French-born place-kicker Florent Riguet had the South Limerick side into a 12-3 lead.

The home side rallied with 15 unanswered points to lead 18-12 inside the final quarter. However, Bruff struck late to secure the points as a late try, converted by Kevin McManus, secured a dramatic one-point win.

Meanwhile, Old Crescent got their Division 2A campaign off to an impressive start when scoring a convincing 32-8 bonus point victory away to local rivals UL-Bohemian at ULs North Campus on Friday night.