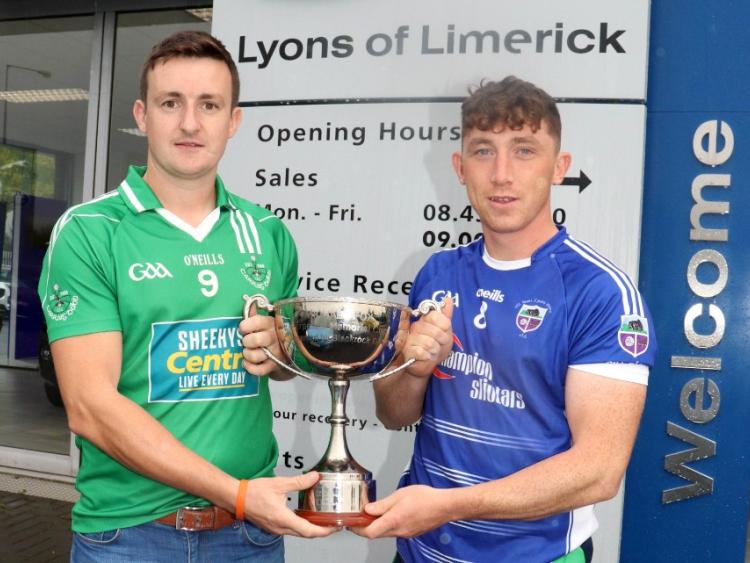 Paudie Leahy of Blackrock and Peter Nash of Kildimo-Pallaskenry

BLACKROCK and Kildimo-Pallaskenry meet in the curtain-raiser in the LIT Gaelic Grounds this Sunday (1.45) in the Lyons of Limerick Premier Intermediate Hurling Championship final.

It’s the sixth season of the new tier two Limerick club hurling championship and both finalists are seeking to lift this title for the first time.

Blackrock are bidding to return senior for the first time since 1998 while a team from the parish of Kildimo-Pallaskenry hasn’t been senior since the 1940s.

While the men from Kilfinane-Ardpatrick have played in the PIHC for all of it’s six seasons, while Kildimo-Pallaskenry are just two years in this grade after their 2017 Limerick IHC title win.

Captained by Paudie Leahy, The Rockies are an experienced outfit with Richie McCarthy, Brian Moloney, David Moloney and Leahy all playing in the 2010 Limerick SHC final with divisional side Emmetts.

Seven of the Blackrock team are also survivors from their 2009 Limerick JAHC winning team – a side that went on to win All-Ireland honours in Croke Park.

Recent years have seen fresh faces like Dylan Dawson, Ian O’Brien and Marty Farrell become regulars for the men in green and white.

Adding to the Blackrock options are club newcomers Gavin O’Loughlin and Liam Walsh.

Defender Walsh brings all his experience from his Kilmallock days.

Interestingly he was part of a Kilmallock defence that included Liam Hurley, who is now trainer of the Kildimo-Pallaskenry team in Sunday’s final.

Kildimo-Pallaskenry are managed by Chris Sexton with coach Peter Finn.

Captained by Barry O’Connell, the men in blue and white have a star man in Kyle Hayes.

Elsewhere across the Kildimo-Pallaskenry team, O’Connell and Cian Hayes have Limerick senior hurling experience, while John Chawke, Tony McCarthy and Peter Nash were all part of this season’s Limerick senior football panel.

Those above aside, Kildimo-Pallaskenry are young, with Lorcan O’Leary, Darren O’Connell, Shaun Barry and Conor Staff vital components.

The scoring stats are also very similar – Blackrock scoring 12-143 and Kildimo-Pallaskenry scoring 10-143. Defensively, Blackrock conceded 14-110, while Kildimo-Pallasenry were hit for 9-111.