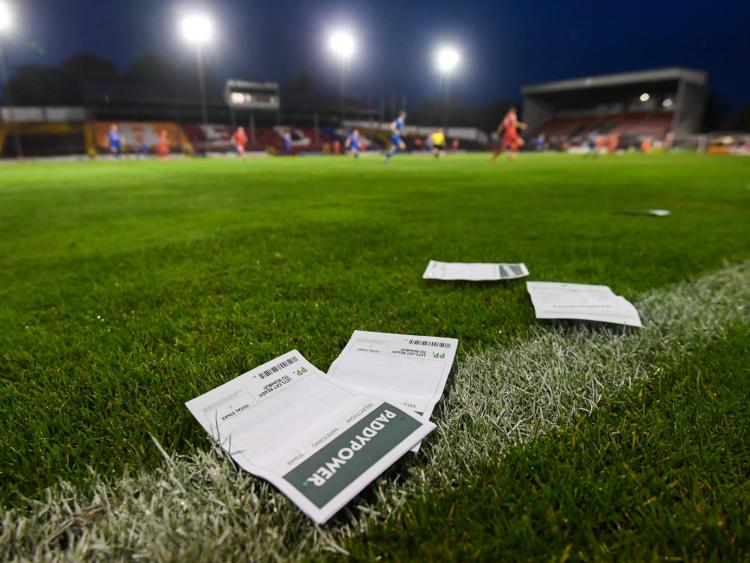 THE curtain came down on Limerick FCs miserable season on Saturday night when the Blues were thumped 7-0 by new SSE Airtricity League First Division champions Shelbourne at Tolka Park.

The result means an inexperienced Limerick FC side finish in sixth place in the league table, with 10 wins and six draws from 27 league fixtures.

Struggling Limerick trailed Shels' 2-0 at half-time as the Dubliners took a firm grip on the game with goals from Jaze Kabia just after the half hour mark and later Conan Byrne.

Limerick made the worst possible start to the second half when conceding a penalty which Shane Farrell coolly dispatched to the net.

Shell-shocked Limerick conceded four further goals before full-time as Kabia bagged two to complete his hat-trick while Oscar Brennan and Aidan Friel were also on target for the new First Division champions.

FAI General Manager, Cappamore man Noel Mooney, was in attendance at Limerick's final league fixture of the season in Dublin.

Betting slips appeared on the pitch at Tolka Park during the course of Saturday night's one-sided game.

The FAI confirmed earlier this month that it is now investigating unusual betting patterns around Limerick FCs recent FAI Cup game away to Sligo Rovers.

The investigation into the FAI Cup game is along similar lines to the one currently underway into the First Division fixture between Shelbourne and Limerick from last April.

In a statement issued earlier this month the FAI insisted that they are committed to a zero tolerance policy on match fixing in conjunction with UEFA.

Gardai carried out searches at a sports ground in Limerick earlier this month as part of allegations into match-fixing.

The searches were led by members of the Garda National Economic Crime Bureau (GNECB).

Gardai from the Limerick division assisted their Dublin-based colleagues during the operation which focused on Hogan Park, Rathbane.

Meanwhile, the High Court confirmed the appointment of an examiner to League of Ireland side Limerick FC just over a week ago.