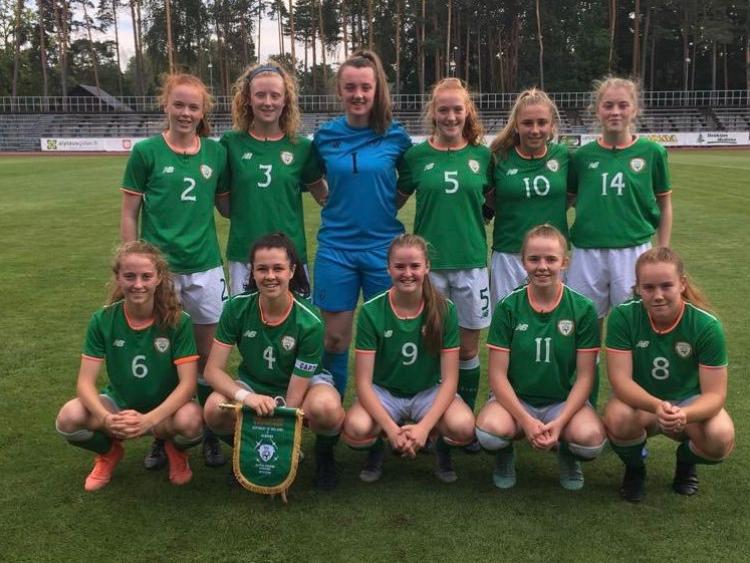 LIMERICK was strongly represented as the Republic of Ireland Women’s U17 squad kicked-off their UEFA Women’s Under-17 Championship Qualifying Round campaign with a thumping victory in Lithuania today, Tuesday.

The Rep of Ireland U17s scored a resounding 10-0 victory over Albania in their opening qualifying fixture, with the winners scoring five goals in each half.

Highly-rated shot stopper Leah Hayes Coen, a student at Scoil Mhuire agus Íde, Newcastle West, who is playing with Cork City, started the game as goalkeeper for the Rep of Ireland side, as did midfielder Aoibheann Clancy, from Kilbehenny, who is playing her club football with Limerick FC.

Clancy was among the goalscorers for the Republic in the second half, firing in their eighth goal with a 30 yard strike.

2 of the 10 goals scored v Lithuania by the #IRLWU17 courtesy of Limerick FC Aoife Horgan & Aoibheann Clancy. Aoifes goal was her 1st touch & a cool finish while Aoibheann had hit the crossbar in the 1st half but made no mistake with this stunning effort in the 2nd half ⚽️ pic.twitter.com/46RSwTXOsg

Defender Jenna Slattery, of Fairview Rangers, and striker Aoife Horgan, of Limerick FC, were also in the Rep of Ireland's match day squad for the game.

Horgan came off the bench in the second period and she scored with her first touch three minutes after coming on.

The Girls in Green will now take on hosts Lithuania, this Friday, September 13, and Greece, next Monday, September 16 as part of the first round of qualifying as they look to take a step closer to next year’s tournament in Scotland.

The WU17 squad includes players from 11 clubs and five new faces, including the highly rated Slattery, of Fairview Rangers.

The four girls have been part of the FAI North Munster Girls Centre of Excellence for the past four years and have all played Munster and Irish schools level too.

Aoibheann Clancy and Aoife Horgan were part of the Rep of Ireland U17 squad last year too, so they are experienced at the level.