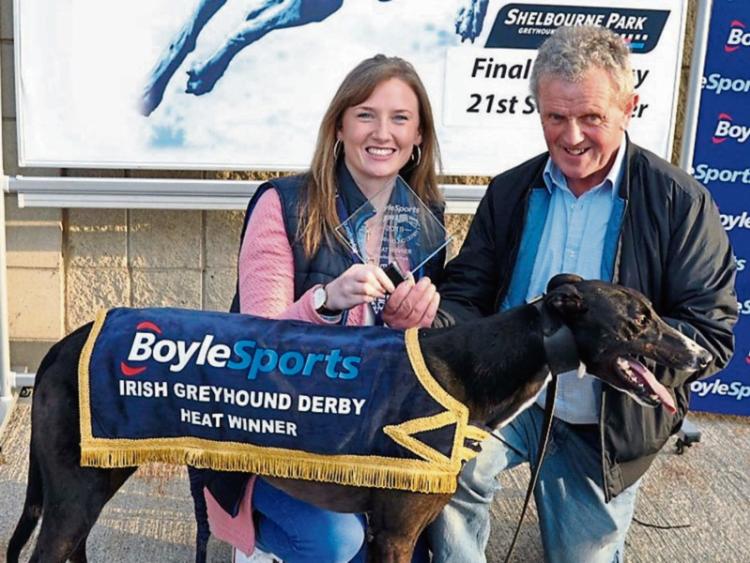 THERE are three Limerick dogs among the final 48 in the race for the 2019 Boylesports Irish Greyhound Derby.

Limerick’s Slippy Cian was a round two heat winner last weekend when another three local owned runners made their exit in Shelbourne Park.

Last Friday and Saturday saw a field of 96 cut in half as the battle hots up for the Derby – the most prestigious race in the Irish greyhound calendar and boasts a prize fund of over €300,000.

Slippy Cian, owned by the Full House Syndicate in Castletroy, posted a time of 29.48 to win his heat, beating 2018 Derby winner Ballyanne Sim in the process.

Allaghaun River, trained by John Lenihan in Abbeyfeale, and Music Toour Ears, owned by the Pension Plan syndicate based on the Ennis Road in Limerick city, also made it through to the final 48.

“The Boylesports Irish Greyhound Derby always attracts the highest calibre of greyhounds from around the country and indeed worldwide. There’s been a real buzz in the air here in Shelbourne Park over the last few weeks as we get closer and closer to crowning the overall Derby winner for 2019,” said Racing Manager with the Leinster Racing Office, Derek Frehill.

“It’s been a classic in every sense of the word so far and we’re all really looking forward to hosting third round night, with 48 dogs and their connections all still in the running to be crowned Derby champion. I want to wish the very best of luck to the greyhounds and their connections still involved,” outlined Frehill.

All eight heats across the third round take place this Saturday, August 31, with the final of the 2019 Boylesports Irish Greyhound Derby will be held on Saturday, September 21, at Shelbourne Park Greyhound Stadium.

While there is a prize fund of over €300,000, payments are staggered for heat winners with larger rewards for greyhounds winning later rounds, particularly quarter and semi-finals, following on from last year’s increase in this area.

This is the sixth year of BoyleSports sponsorship of the classic event, which has been running since 1928, receiving classic status in 1932.

The competition, which is run over a distance of 550-yards, takes place in Dublin’s Shelbourne Park.

Earlier this month 156 greyhounds began the event across 26 heats – a 13% increase on entries for last year’s event.

Last year’s event was won by Ballyanne Sim, for Kildare trainer Mark Robinson and owner Eamon Cleary, who took home the €140,000 winning prize in a time of 29.28 seconds, one of the fastest Derby victories ever.

Last weekend Limerick’s Slippy Cian put down a marker when defeating the champion in the round two heat.

Kilmacdonagh is the current derby favourite – priced at 7/1. Slippy Cian is the leading Limerick fancy – available at 16/1.

Both Allaghaun River, a round one heat winner, and Music Toour Ears are 66/1 shots for ultimate glory.