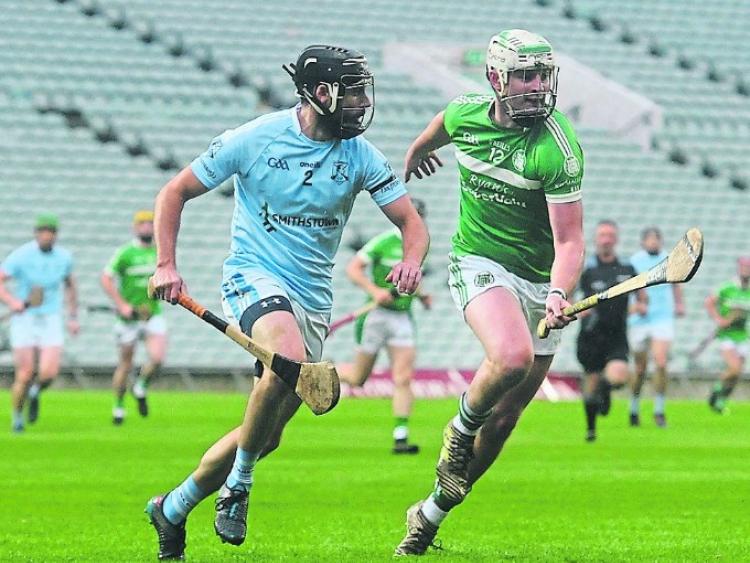 Cathall King of Na Piarsaigh and Robbie Egan of Kilmallock

All 12 clubs have something to play for.

There is no 100% record left after four series of group games but Patrickswell, Na Piarsaigh, Kilmallock and Doon are confirmed teams among the six spots in the knockout stages with another four teams battling for the two remaining places.

And, there is a straight relegation shootout between Knockainey and Garryspillane.

Patrickswell are a confirmed semi finalist regardless of this weekend's results.

The Ciaran Carey managed Patrickswell are unbeaten and will want that to maintain when they play neighbours Adare. The Well will be without inter-county stars Cian Lynch (suspension) and Aaron Gillane (injured) but will want to continue to set the pace and finish top of the table and bounce back to winning ways after the draw last time out against Kilmallock.

The back-to-back champions have confirmed their place in the knockout stages and face into a repeat of the 2018 county final with Doon this Saturday.

The winner between Na Piarsaigh and Doon will join Patrickswell in the semi finals, while the losing side advance to the quarter final. A drawn encounter would benefit Na Piarsaigh.

Like Na Piarsaigh they will advance to the business end of the championship but only a win over their city rivals will book a semi final. Defeat means a quarter final against one of the teams from Group B - Monaleen, Ballybrown, Ahane or Murroe-Boher.

The Balbec are a confirmed quarter finalist and can't directly advance to the semi final. The men in green and white are playing to determine if the finish in third or fourth spot in the group and therefore play the newly promoted side from Group B or the runners-up from that group in the quarter finals.

Adare can’t reach the knockout stages but will keep an eye on the progress of South Liberties - a first win of the 2019 Limerick SHC for those in green and gold hoops would force a relegation play-off against Adare, if they fail to get a positive result against Patrickswell.

Promoted last year South Liberties’ bid for the great escape must start with a win over Kilmallock. They have lost all four games to-date but a win over Kilmallock and an Adare defeat to Patrickswell would force a relegation play-off to decide who drops to Group B for 2020.

Monaleen are current table-toppers and while unbeaten they have two wins and two draws from their four outings. Regardless of other results, a win over Ballybrown ensures promotion for Monaleen and a quarter final spot.

Monaleen can lose and still reach the quarter finals if Ahane fail to beat Murroe-Boher. In this scenario Monaleen would advance but miss out on the sole promotion spot.

If Ahane beat Murroe-Boher they will look to the result of the Ballybrown-Monaleen game to determine their fate - a Monaleen win means just a quarter final spot for the Castleconnell side, while a Ballybrown win or a draw would also see Ahane promoted into Group A.

Ahane can also draw and earn promotion but would need Ballybrown to beat Monaleen.

A Ballybrown wins confirms their quarter final spot but they need an Ahane defeat to ensure promotion and an immediate return back into Group A.

If Ballybrown win and Ahane draw, then Ahane get promoted and both reach the quarter finals.

There is no sequence of results where a Ballybrown defeat is good enough.

Remarkably, Murroe-Boher are without a win but while their four draws can’t propel them into the promotion race it can help them into a quarter final, which they also reached last year.

Murroe-Boher must win to advance into the last six of the championship.

A Murroe-Boher win and a Monaleen win ensures another quarter final for the east Limerick side as they would have the ‘head-to-head’ on Ahane.

A Murroe-Boher win and a Ballybrown-Monaleen draw would see, Murroe-Boher, Ballybrown and Ahane level on points and scoring difference again required - the Clarina men currently well better in this scenario.

It's a straight relegation battle between Garryspillane and Knockainey. Both south sides are without a win, albeit The Bouncers have two draws and The All Blacks one draw.

Another draw would maintain the senior status of last year’s promoted side Garryspillane.

Only a win can keep Knockainey from dropping down to the Premier Intermediate Hurling Championship.

Knockainey have won just three of 20 games across the last four seasons since their promotion back up senior.