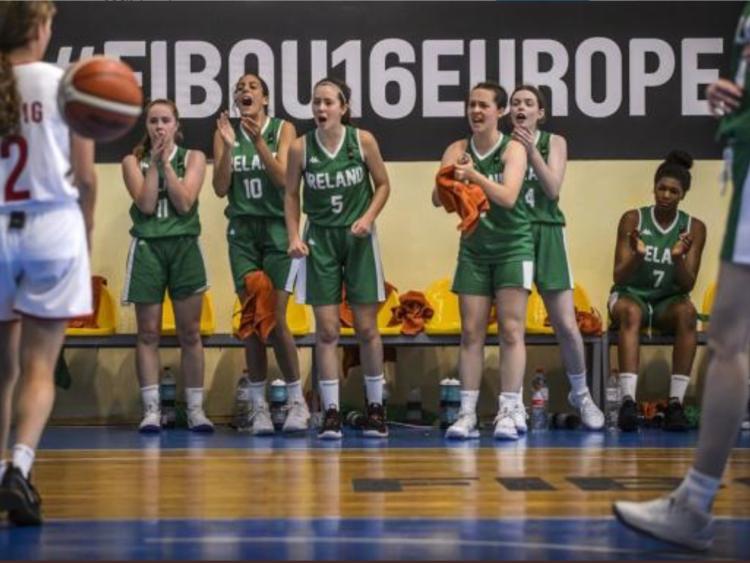 The Ireland U16 Women claimed a comprehensive 106-37 victory over Albania in their second group game at the FIBA U16 Women’s European Championships Division B.

Ireland started the better of the two teams, building a substantial lead on their Albanian counterparts, scoring sixteen points without reply to begin the game. Ireland were without their captain, Hazel Finn, due to an injury she picked up in yesterday’s game v Austria. Kara McCleane, Miah Ryan and Ella O’Donnell picked up big scores towards the end f the first quarter to give Ireland a 30-8 lead

The second quarter saw much of the same from both sides as Ireland pressed hard on defence, forcing Albania to turn the ball over and lead to easy scores from the girls in green. McCleane and Ryan were, once again, prominent along with Michelle Ugwah who performed well on the boards and grabbed vital rebounds for her team. O’Donnell hit a couple of nice three pointers and Sarah Hickey scored under pressure to give Ireland a 56-13 lead at half time.

Two from two! Ireland U16 women secure their second win of #FIBAU16Europe running out 106-37 winners over Albania #COYGIG #GreenShoots pic.twitter.com/KDh9wwgyf8

The third quarter allowed Ireland to use their bench with many players receiving equal playing time. Sinead Keane and Sophie Moore made a great impact coming off the bench, scoring and assisting. Miah Ryan began to find her range beyond the three-point arc as she made some nice threes and stretched Ireland’s lead to 84-25 going into the fourth.

In the fourth, Ireland continued to play relentlessly, forcing Albania to commit turnovers while also driving hard at the basket and through gaps in the Albanian defence. Keane, Ryan, Ugwah and Tania Salvado all picked up scores for Ireland as they ran out winners.

After the game, Ireland U16 Women’s head coach Andy Gill said, “I was very pleased with the way we ran our full court defence and forced a lot of turnovers on their part. The important factor is we’ve started the tournament with two wins which will hopefully keep us out of the dogfight for 17th-24th place and now we move on to Portugal tomorrow.”

Meanwhile, in Montenegro, Ireland U16 men lost out to Finland 64-83 in their 12th – 16th classification game of the 2019 U16 Men’s European Championships Division B.

ND Okafor had another near triple double for Ireland finishing with 19 points, 13 rebounds and 7 blocked shots in Ireland’s standout performance but it was not enough to get them over the line.

Ireland got off to a good start, Darragh Ferguson hit a three and then assisted Roneil Oguekwe and Mobi Ikegwuruka to give them a 9-0 start in the opening 4 minutes. Finland got back into it before Ireland pulled away towards the end of the quarter on the back of some fine work by Michael O’Mahony and ND Okafor. It was 23-16 at the end of Q1.

The second saw baskets harder to come by, Okafor and Sean Pollmann-Daamen’s 3 free throws the only Irish scores in the opening five and a half minutes. Ireland were working hard on defense but Finland pulled level at that point, a better finish saw Oguekwe, Okafor and Wede Esajobor get them ahead at the half, 35 -32.

The start of the second half is where Ireland have come undone in previous games and so it proved again today. Finland started to make some shots and their top scorer Eric Chime started to find his touch from outside, he ended up with seven threes in total and his ability to find one every time Ireland started to get back into the game was crucial. Okafor and O’Mahony were keeping Ireland’s scoreboard ticking over but Finland finished strong and were leading 50 – 58 going into the fourth.

Ireland got it back to 6 but couldn’t get any closer than that as Chime would hit a three to open the lead out again. Nelson Fotso and Milo Herbst along with Ikegwuruka and Okafor finished some nice moves, but Ireland will rue the number of turnovers especially in the second half that gave Finland more opportunities to score. It finished Ireland 64 – 83 Finland. This result means Ireland will be fighting for 15th place tomorrow at 10:30am against the loser of Hungary and Iceland.