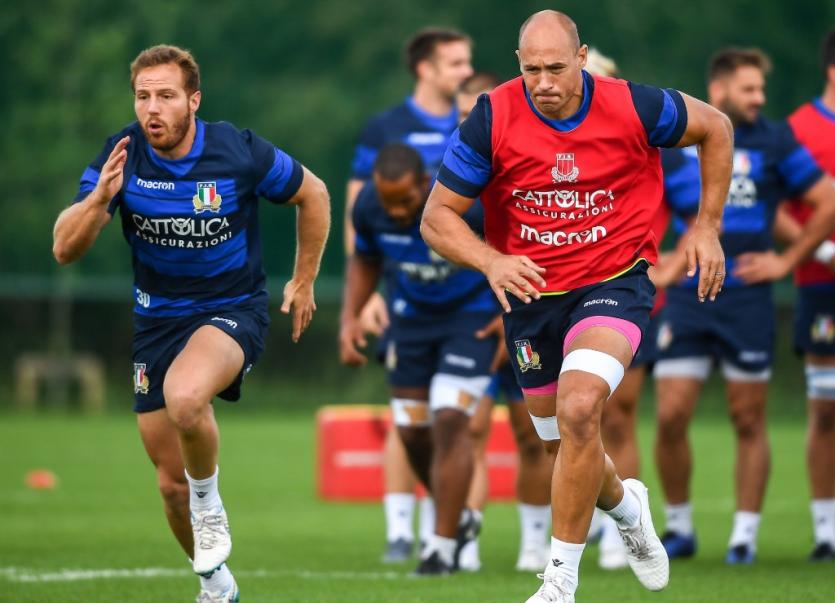 Sergio Parisse, right, and Giulio Bisegni during an Italy rugby training session at UL this week

THE Italian Rugby World Cup squad, under head coach Conor O'Shea, has been in Limerick this week preparing at UL for Saturday's international fixture with Ireland at the Aviva Stadium, Dublin.

The Italian squad has been training at UL, using their impressive range of facilities, including the the impressive new grass pitch facility at Maguires Field.

Indeed, the Italian squad was the first team to use the new grass pitch at Maguires Field.

The squad departed for Dublin on Thursday ahead of Saturday's opening World Cup warm-up game against Ireland at Lansdowne Road, 2pm.

The Ireland rugby squad spent a week of pre-season training at UL earlier this summer.

The Ireland squad has returned to their usual Maynooth training base after completing five tough weeks of pre-season training.

To date, the squad has completed two training weeks at Carton House, a week at Connacht Rugby’s base in Galway, that week in UL at Munster’s training base and a week at the IRFU’s new High Performance Centre in west Dublin along with two regeneration weeks in between.

Ireland’s World Cup campaign gets underway in Japan with a crucial match against Scotland on Sunday, September 22.

Ireland will be seeking to reach the semi-final of the tournament for the first time.