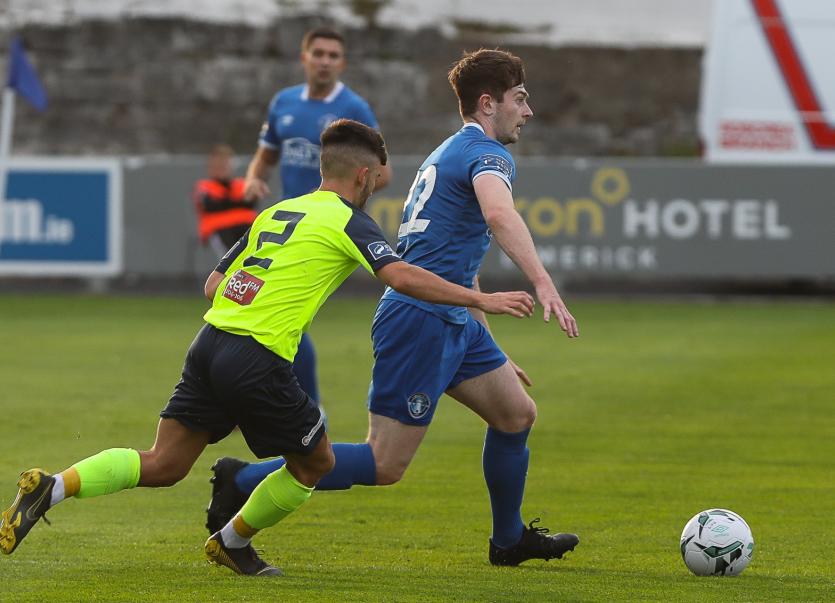 LIMERICK FCs promotion play-off hopes appear all but over, as the Blues' dramatic second half comeback wasn't enough to prevent Tommy Barrett's side from suffering a frustrating 4-3 defeat to Cobh Ramblers in a Markets Field goalfest on Friday night.

Limerick's third home league defeat of the SSE Airtricity League First Division season is a hammer blow to the sixth-placed Shannonsiders' hopes of hauling themselves into the promotion play-off positions with now just five games to go in the regular season.

Tommy Barrett's charges left themselves with a mountain to climb after a sluggish first half display had the Blues trailing 3-0 to the visitors in their Munster derby. There simply looked to be no way back for the home side.

However, to their credit Limerick rallied superbly after the break and goals from substitute Sean McSweeney, Karl O'Sullivan and Lee Devitt brought the Blues to within a whisker of pulling off the great escape.

Ultimately, Cobh's fourth goal of the night from a Dave Hurley penalty proved the difference between the sides as Ramblers recorded just their second away league win of the season.

This was Limerick's third successive league defeat ahead of next week's trip to Stradbrook to face Cabinteely.

Limerick have have won just one of their last six league games and have taken just four points from a possible 18 during that spell.

Limerick boss Barrett made two changes in personnel from the side which lost to Drogheda in their previous outing for this latest Munster derby. Darren Murphy and Tomas O'Connor came into Tommy Barrett's starting line-up.

After a tame opening, Cobh took the lead in the 13th minute with a smashing opening goal. Former Limerick FC winger Ian Turner created the opening with a terrific surging run down the right. Turner then struck a sweet cross with the outside of the right foot which was headed home by Ramblers frontman Brian Murphy.

The goal came as a real body blow to the home side who had shipped four goals at home to the Drogs just seven days earlier.

Limerick looked lethargic in that opening 20 minutes, before the home side created their first half decent opening midway through the half when Jason Hughes raided down the left before setting up Lee Devitt. However, his shot from outside the box was comfortably saved by Rambers 'keeper Paul Hunt.

However, Cobh, who came into the game in seventh place, punished Limerick for poor defending in the 24th minute when Murphy produced a composed finish for his and the Cork side's second goal when putting the ball through Jack Brady's legs. At 2-0 down, Limerick were facing a mountain to climb.

Goalscorer Murphy might well have been on the mark a few minutes later, only to miskick from Cameron Harrison's well-placed cross.

Cobh did make it 3-0 in the 34th minute when Turner fired the ball past Brady to help the visitors move within touching distance of just their third away league win of the season.

Substitute Sean McSweeny, one of two first half changes made by Blues boss Barrett - the second saw Clyde O'Connell introduced - came close to pulling a goal back for the home side in the 43rd minute, only for his effort to flash just over the crossbar.

Limerick did give themselves a shot at pulling off the most unlikely of comebacks seven minutes after the restart when substitute McSweeny fired home after being set up by Hughes.

Darren Murphy did forced Cobh keeper Hunt into a smart save from a well struck free kick.

The Blues pulled a second goal back on the hour mark through an alert Karl O'Sullivan after clever approach play from McSweeney. At 2-3 the momentum had suddenly swung in Limerick's favour.

The home side played with a much greater urgency and purpose during a nail-biting second period.

The life was sucked right out of Limerick's comeback in the 70th minute, however, as Dave Hurley helped the Cork side into a 4-2 lead after scoring from the penalty spot.

The drama was far from over, however, at the Garryowen venue. Lee Devitt gave Limerick a lifeline when he cooly blasted the ball past Cobh keeper Hunt to make the score 4-3 to the visitors with 16 minutes remaining.

However, try as Limerick might over the remainder of the game the home side was unable to find a precious equaliser which would have secured a share of the spoils.