Cork too strong for Limerick in Munster U20 Hurling Championship 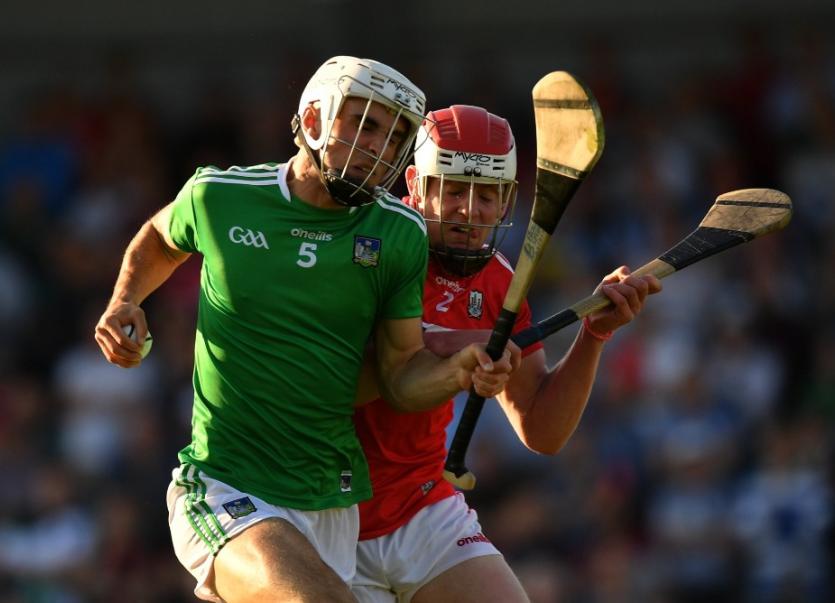 Rory Duff of Limerick in action against Conor O'Callaghan of Cork

DEFEAT for Limerick in the Munster U20 Hurling Championship this Wednesday night against Cork.

The quarter final tie in Pairc Ui Rinn finished with a 1-20 to 0-16 victory for The Rebels.

The men in red now play Clare in the provincial semi final on Leeside next Wednesday.

They game was level for the third time in the 13th minute of the second half but from here Cork powered to the win with Limerick not scoring again from play after the sides were tied at 0-13 each.

It was an opening half where those in red hit six wides, compared to just one for Limerick.

Level twice, Cork always appeared to hold the upperhand and had a four point lead with half time in sight.

Captain Ronan Connolly had Limerick off the mark after three minutes but it was to be 10-minutes before another score for the Paul Beary managed men in green.

Two '65s from Paul O'Brien helped to level the game at that point with Cork left to rue five wides in the opening 10-minutes.

Cork also have goalkeeper Ger Collins to thank in the 12th minute - denying Dylan O'Shea a goal at his near post.

When Jack Ryan intercepted a Cork puckout the game was level and at the mid-point of the first 30-minutes.

Shane O'Regan (2) and Brian Turnbull (2) led the way as Cork eased out to 0-10 to 0-6 clear with three minutes to the interval - Mark McCarthy on the mark in this spell for Limerick.

Credit Limerick they struck vital late points with Connolly and Rory Duff getting injury time scores to ensure just two points between the teams at the break.

It took Cork just 15-seconds to reopen their account in the second half and while Hanfin and O'Regan added to their accounts Limerick matched the early scores with McCarthy, Connolly and Paul O'Riordan points.

The game was soon level for a third time when O'Brien landed another placed ball effort - the stopwatch now showed 16-minutes to play.

Cork were now up to 10 wides (two for Limerick) but a third point of the evening for Turnbull moved them back ahead again to end a run of three successive Limerick scores.

The Rebel advantage was soon out to five points and it was Shane O'Regan again doing the damage - crashing a rebound into the net after an Evan Sheehan shot for goal had been saved onto the upright by Jason Gillane.

Cork had all of that tally bar three from play, while at the other end O'Brien frees were keeping Limerick in touch.

The Mungret man added two more to his tally and just the goal was between the teams with six minutes to play.

Turnbull and O'Regan embellished their displays with more scores and Limerick were left needing a goal in the final minutes.

The goal never looked like arriving and Cork extended the winning margin out to seven points.