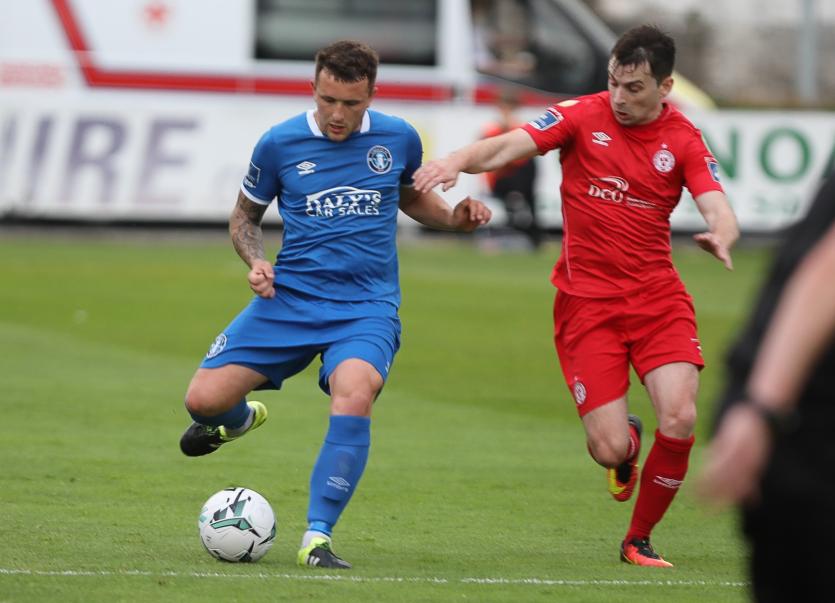 LUCKLESS Limerick FC surrendered their unbeaten home record in this season's SSE Airtricity League First Division after suffering a frustrating 1-0 defeat to leaders Shelbourne before an official attendance of 525 at the Markets Field on Friday night.

Limerick, who had won five and drawn three of their eight previous home league games this season, were left to rue a first half penalty miss as Shels' striker Ciaran Kilduff struck for his eighth league goal this season to secure three precious points.

Limerick had taken an impressive 14 points from a possible 21 over their seven previous league fixtures, but Darren Murphy's first half penalty which flew over the crossbar was their only real clear-cut chance on the night.

This was the start of a really difficult run of fixtures in the league for Limerick who face the top three sides in the next four league games.

Following Friday night's date with leaders Shels', the Blues face high-flying Longford Town at Garryowen on Friday night next, July 5, before an away tie with fifth-placed Bray Wanderers and a home date against Drogheda Utd.

Limerick lined out without striker Connor Ellis who departed the club in recent days, citing the late payment of wages as a factor in his decision to leave the Shannonsiders.

In a re-jigged line-up Shane Tracy started in the centre of midfield, while Jason Hughes lined out at right back, with Aaron Fitzgerald deployed at left back.

Tommy Barrett's Limerick created their first real opening of the game on 11 minutes. The lively Karl O'Sullivan made a surging run down the right, gliding past a couple of defenders before pulling the ball back for Kieran Hanlon.

The strikr turned quickly, but his snap shot was deflected out for a corner which was eventually cleared by the Shels' defence.

The Blues' then created their second opportunity of the evening four minutes later. Hanlon was fouled as he looked to compete for possession 25 yards from the Dubliners' goal.

The table toppers showed their threat moments later when Ryan Brennan powered through midfueld, but his dipping effort flew just over from 25 yards out.

Limerick FC had a gilt-edged opportunity to take the lead on 20 minutes. Match referee David Dunne had no hesitation in pointing to the spot after striker Hanlon was pushed in the back.

However, Darren Murphy's dink effort from the penalty spot flew high over the crossbar.

Limerick paid a price for the failure to take the lead on 38 minutes. Blues keeper Jack Brady opted to try and shepherd the ball out over the end line with Shels' striker Ciaran Kilduff closing in. As the ball ambled slowly towards the whitewash, Kilduff got a nick on it to prise it away from the otherwise terrific 'keeper, before then producing a sublime finish from a tight angle to flick the ball into the empty net. It was Kilduff's eighth league goal of the season. How Limerick would love to be able to call upon a striker of that prolific nature.

The goal took the zip out of the crowd and Shels' maintained their one-goal advantage until the break.

The third quarter failed to produce much by way of goalmouth incident as defences held sway.

Darragh Noone did threaten to add a second goal for the Dubliners in the b83rd minute, but his well struck ever was saved by Brady in the Blues' goal.

Limerick introduced Clyde O'Connell, who has joined the club from local junior side Regional Utd. as a fourth quarter substitute.

Leaders Shels' held Limerick at bay in the closing minutes to cement their place at the top of the table.