Terrific start for Limerick sides at U15 Gaynor Tournament at UL 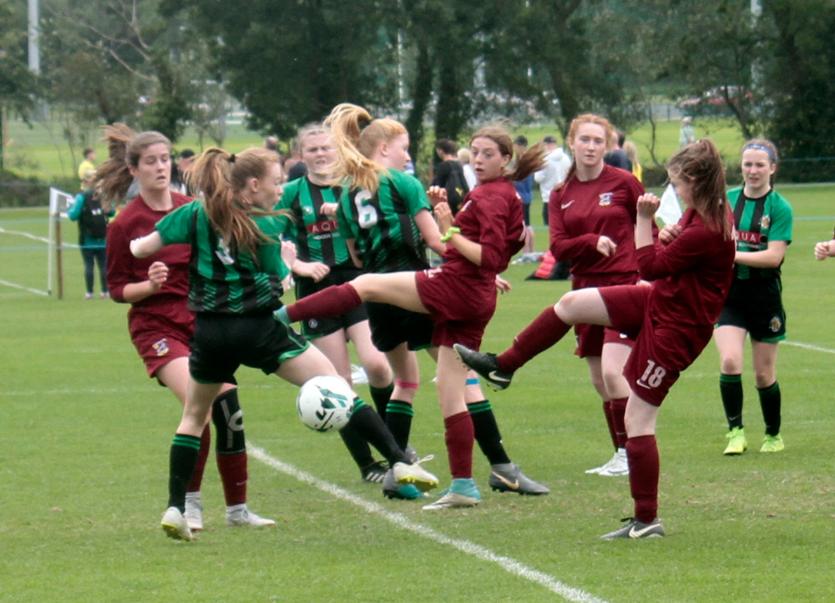 THE two Limerick sides competing at the 2019 Fota Island Resort U15 Gaynor Cup made the perfect start to the competition with a pair of wins each at UL this Friday.

In Group 2 of the Gaynor Cup, the Limerick Desmond schoolgirls league side defeated the Wexford League 1-0 in their opening fixture, before recording an excellent 2-1 success over the MGL South in their afternoon game.

Jodie Griffin, of Fairview Utd, scored the winning goal against Wexford and was also on target against the MGL South, while Desmond's second goal in that game was scored by Ava Horgan, of Abbeyfeale AFC.

The Desmond's final group game is against the MGL North at 9.30am on Saturday at UL.

County beat the Kildare League 6-2 in their opening fixture with both Áine Walsh, of Regional Utd, and her clubmate Aoife Cronin grabbing hat-tricks of goals in the clinical success.

Limerick County upped their scoring prowess even more in their afternoon Trophy fixture, recording an emphatic 10-0 victory over the Midwestern League.

Ace goalscorer Cronin went one better this time, netting four times to bring her tally of goals for the day to seven. Not to be outdone, her Regional Utd clubmate Áine Walsh claimed her second hat-trick of the opening day to make it six goals.

County's remaining goals were scored by Aoibhinn Murphy, of Knockainey AFC, who scored two, while Ciara O'Riordan, of Charleville AFC, was also on the mark.

Limerick County are back in Trophy action at UL on Saturday morning when facing the Kerry League at 9.30am, before doing battle with the Clare League at 4pm.