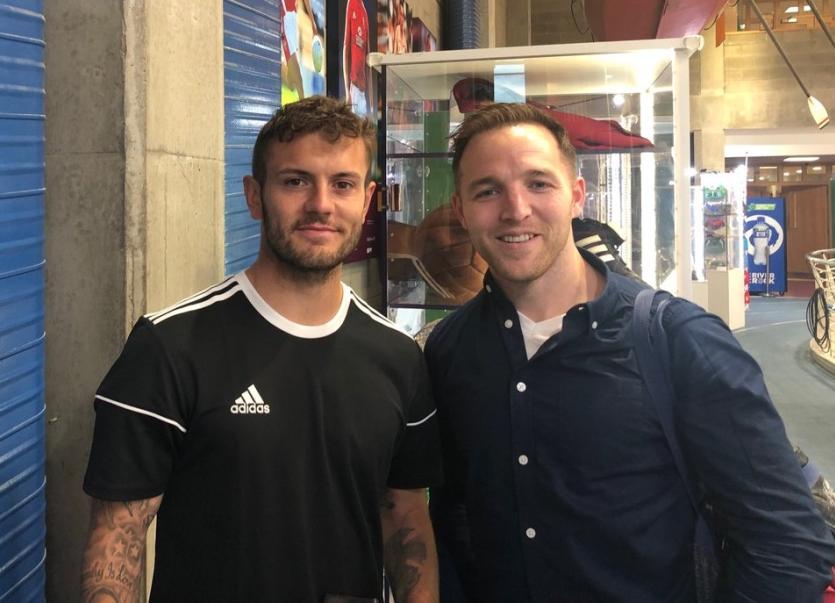 West Ham United and England midfielder Wilshere and former Kerry All-Ireland football winner Darran O'Sullivan checked out the exhibition which chronicles 60 years of the UEFA European Championships tournament, with Dublin set to host four games in the tournament next summer.

Wilshere has previously visited Limerick this years to receive treatment from Declan Lynch, sports physiotherapist. The Limerick man, a graduate of the University of Queensland, is a former first team physio at Arsenal FC, where Wilshere previous played.

Jack Wilshere joined the Hammers on a three-year contract in July 2018. The England midfielder joined the Club he supported as a boy after he chose to leave Arsenal after 17 years, having won two FA Cups and the FA Youth Cup with the Gunners.

Capped more than 30 times, Wilshere was part of the England squads at the 2014 FIFA World Cup finals and UEFA Euro 2016.

Wilshere previously made headlines in Limerick when he gave his backing to Limerick FC Airtricity League star Shane Tracy to make it to the cover of a special edition of EA's FIFA 14 for Ireland.

Tracy's sister played for the Arsenal women's side, and Shane himself played for the youth team and reserves at the London side, before returning to ply his trade in Limerick.

The FAI National Football Exhibition, which will remain at UL until the end of this month, relives some golden Irish footballing memories, discovering rare memorabilia, programmes, jerseys and artefacts, and having fun with the interactive stations and photo-booth.

Admission to the exhibition is free.