WATCH: Silverware for Limerick at SFAI Kennedy Cup in UL 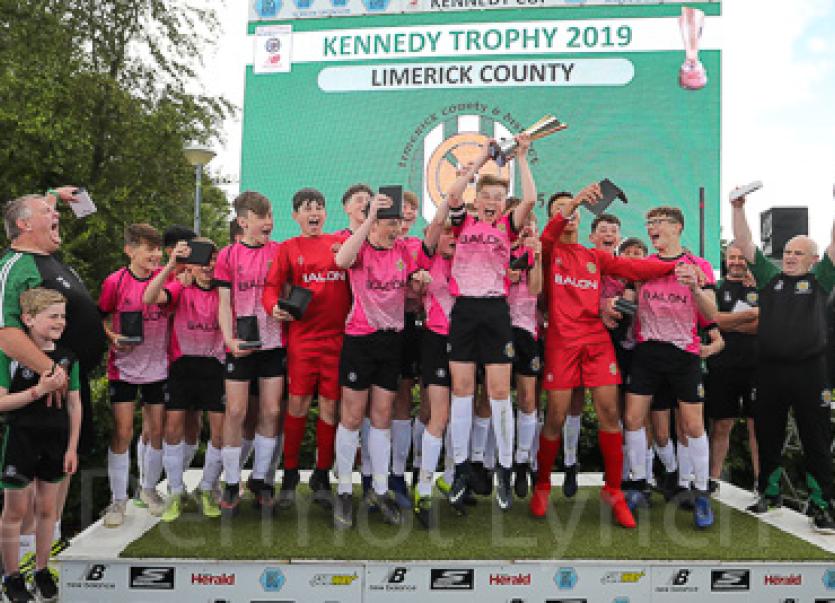 THERE was mixed luck for the two Limerick sides competing in finals for silverware on the final day of the SFAI New Balance Kennedy Cup at UL.

The Limerick District Schoolboy League (LDSL) had to be satisfied with a 10th place finish at the 32-team event after going down 2-1 to the Cork Schoolboy League in their Bowl final on Saturday.

However, there was joy for the Limerick County Schoolboy League as they were crowned Trophy winners following a deserved 1-0 Trophy final victory over the West Waterford-East Cork League.

'County' claim a 25th place finish in the five-day, 96-game tournament as a result of their success.

A first half goal from Tiernan Meaney, of Kildimo Utd, ensured Desmond finished off their six-game Kennedy Cup campaign on a winning note.

Meanwhile, Limerick County finished off their Kennedy Cup programme with a third straight win after easing past WWEC at a well-attended Trophy final on Saturday morning.

A goal from Hugh Murnane, of Herbertstown AFC, just before half-time proved to be the only goal of the game. 'County' could and probably should have been further ahead on the balance of the game.

Indeed, it took an excellent save from 'keeper Luiz Pablo to deny WWECs Oisin Coffey from grabbing a dramatic equaliser late in the second half.

Afterwards victorious Limerick County manager Eoghan O'Donnell said: "You have to be proud of these lads, from number one to 20 they were fantastic all week.

"They gave it 100%. Some of these lads have been with us for the past four years, 50% of them probably. Week in and week out training, for the past 12 months twice a week training.

"They are a great bunch. Anything we told them they took it on board. We are ecstatic. It's a trophy, silverware at the end of it all, it's fantastic."

In the Bowl final played out before another bumper attendance, the LDSL and the Cork Schoolboy League were deadlocked 0-0 at the end of the opening half.

Cork took a grip on the game in the third quarter with two goals from Harvey Skieters, of Corinthian Boys, one from the penalty spot.

The LDSL gave themselves hope of staging a dramatic comeback when Aisling Annacotty's Darren Nwawkwo scored from a delightful free-kick from his clubmate Stephen Young out on the left.

However, time ultimately ran out on the LDSLs hopes of sending the game to penalties as Cork held on for a slender one-goal success.

The defeat was the first one suffered by the Limerick side in the Kennedy Cup as they had won three and drawn two of their previous fixtures at UL this week,

LDSL manager Noel O'Connor said: "We saw the team grow and grow from the first day. Overall, the players have been fantastic. I thought that was a very, very good Cork team.

"I thought the penalty was very harsh for an U14 game, our player was shepherding the ball out of play, you see it every week.

"Look, that is the way it goes. We were 2-0 down and you might think we'd get beaten out the gate, but we go down the pitch and score a magnificent goal.

"But it just wasn't meant to be. I think 10th place overall probably is a fair reflection on the week."