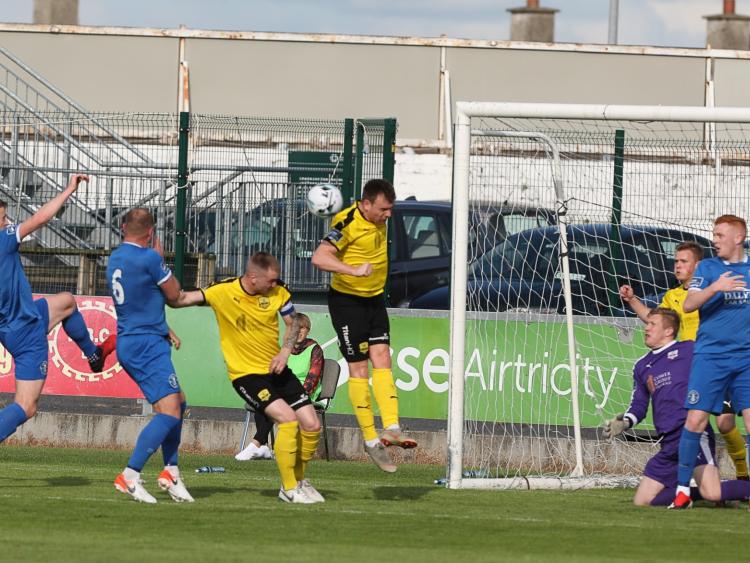 A MUCH-IMPROVED second half display helped resilient Limerick FC come from behind to claim a precious 2-1 victory over Galway United in the SSE Airtricity League First Division before an attendance of just 435 at the Markets Field on Saturday night.

The Shannonsiders remain unbeaten at the Markets Field in their eight home league fixtures this season as the Blues have recorded five wins and three draws during that period.

Blues boss Tommy Barrett mad two changes to the starting line-up from the side which drew with Athlone Town eight days earlier as Colm Walsh-O'Loughlen and Lee Devitt came into the side in place of Darren Murphy and Karl O'Sullivan.

Galway Utd took the lead on 34 minutes following some excellent play down the right by the former Aisling Annacotty player Dara Costelloe. The Limerick teenager cut into the box before pulling the ball back for Shane Doherty to fire the ball past Limerick netminder Jack Brady from inside the six yard box.

Limerick came close to drawing level four minutes later as Kieran Hanlon darted in from the left, but his cross-shot was clawed away from under the crossbar by Galway 'keeper Kevin Horgan.

Galway deservedly maintained their 1-0 lead until half-time as the small home support hoped for more urgency and intensity from the Blues in the second half.

Limerick came within a fraction of drawing level with a minute of the restart. Shane Tracy's brilliantly struck free-kick from outside the penalty area collided with the outside of the upright before flashing wide with Galway 'keeper Kevin Horgan scrambling to get to it.

The home side did draw level in the 50th minute. Raiding full-back Shaun Kelly cut in from the right before sending a delicious cross into the penalty area where Lee Devitt fired home. The small, but vocal home support in the covered stand roared their appreciation.

The Blues came within a whisker of hitting the front three minutes later. Again the rampaging Kelly created the opening down the right flank. This time the full-back's cross was agonisingly headed just over the crossbar by striker Connor Ellis.

An improving Limerick were not to be denied, however, with the home side hitting the front on 59 minutes.

Sean McSweeney was the provider this time as his left-footed cross was flicked into the net by the lively O'Hanlon. The goal was due reward for the hard-working O'Hanlon.

It proved to be a precious winner too, sending the small but enthusiastic Blues support home happy.

Next up for Limerick in the SSE Airtricity League First Division is a date with Wexford on Friday night next, June 14, 7.45pm.