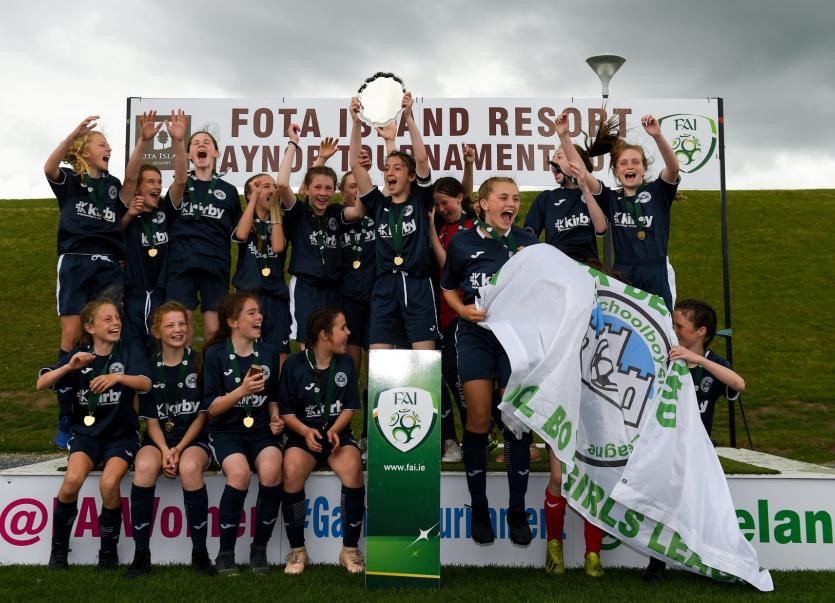 THE Limerick Desmond U13 side celebrated a stunning Plate final success at the Fota Island Resort Gaynor Cup at UL on Bank Holiday Monday.

A clinical Limerick Desmond side eased past the Mayo League 5-0 to round off the three-day tournament with an emphatic success.

Limerick Desmond took a grip on the final in the opening half after which they held a commanding 3-0 half-time lead. Two further goals in the second half wrapped up an impressive win for the Desmond U13s who had beaten North Tipp in the semi-final.

The Limerick Desmond goals in the final came courtesy of Jodie Griffin, of Fairview Rangers, who grabbed a brace, while the Ballingarry AFC trio of Katie Lawlee, Donna Kenny and Lucy Fitzgibbon were also among the goals.

Exciting goalscorer in the final Lawlee was later named as the Player of the Match.

Donna Kenny had scored two goals in the Desmond side's semi-final win on Sunday, while another goalscorer in the final Jodie Griffin also found the net in the win over North Tipp.

Meanwhile, to cap an excellent day for the local sides on the final day of the Fota Island Resort Gaynor Cup at UL, Limerick County U13s defeated the Inishowen League 2-0 in their play-off game to secure a 15th place finish at the tournament.

The Limerick County goals were scored by Isabella Collins and Niamh Houlihan.