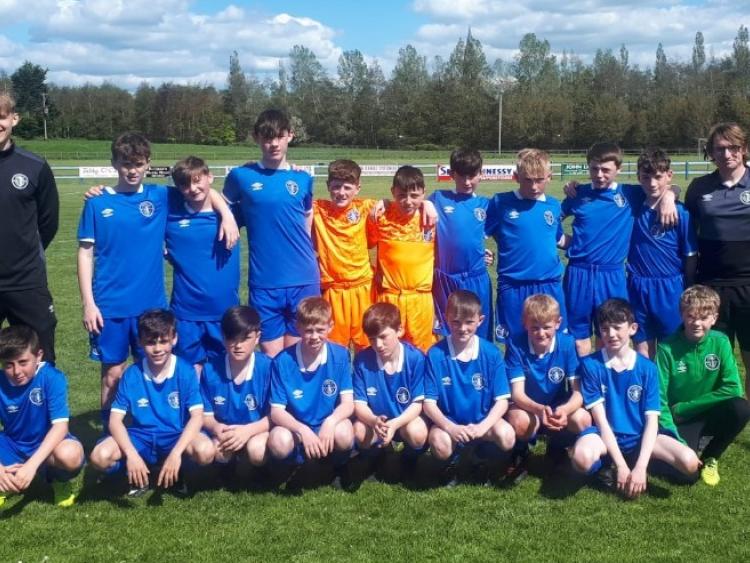 IN-FORM Limerick FC U-13s maintained their excellent winning run in the SSE Airtricity U13 league with a thrilling 3-2 win over Galway Utd at the Salthill Devon Grounds on Saturday last.

Limerick entered the game with seven wins on the bounce after scoring an injury time winner last week away to Cobh Ramblers, while Galway won away comfortably against Athlone Town.

The Blues started the game with good control of possession and this would be the theme for the first half.

Limerick would spend long periods in Galway's half with both good possession and pressing when they lost the ball. However with all the pressure, both on and off the ball, Limerick were unable to test the goalkeeper sufficiently.

Galway looked to be a threat on counter attacks, but Limerick's defence dealt very well with each situations.

Limerick's persistence finally paid off as Aidan O' Shea scored from a corner kick after the ball initially scrambled around the
six-yard box before he tapped it in.

It looked like Limerick would go into half time 0 - 1 up, but a long ball from Galway wasn't dealt with by the visitors' defence and the Galway striker pounced to finish from an acute angle to level the game up before the interval, 1 - 1.

Galway took the lead after the restart when a strike from 30 yards out by a midfielder went over the Limerick
goalkeeper and into the roof of the net.

Limerick were once again staring at the possibility of defeat for the first time since the opening game of the season.

The reaction from the Limerick players showed that they weren't ready to give up, as the took control of the game with slick
passing and good combination plays.

They came close to equalising with Tom Delaney having a energetic game from right back as he saw two efforts go
just over the bar.

Limerick's pressure would finally crack the Galway defence as good link up play between Cillian Mulvihill and Jamie Forde
would see Mulvihill find his way in front of goal and he slotted the ball into the net to level the game once more.

The game became very much an end to end affair with Jack Koyce nearly scoring for Limerick from close range while,
Galway struck the crossbar.

Limerick enjoyed more possession and after good dribbling by Cillian Mulvihill, he was only halted by a
handball from a Galway defender just outside the box.

As the game entered stopage time, Mulvihill stepped up to take the free kick.  He hit a thunderous shot with his right foot which flew past the Galway goalkeeper and into the top corner of the net.

It was another dramatic late winner for the Blues as they saw out the remaining moments of the game to make it eight wins in
a row.

Limerick FC U13 squad and staff would again like to thank everyone for their continued support towards the group, while wishing Galway United all the best for the remainder of the season.

Next up for the young super blues in the final match of Group 2 is against the group leaders Cork City at Hogan Park on this
Saturday June 1 at 2pm.