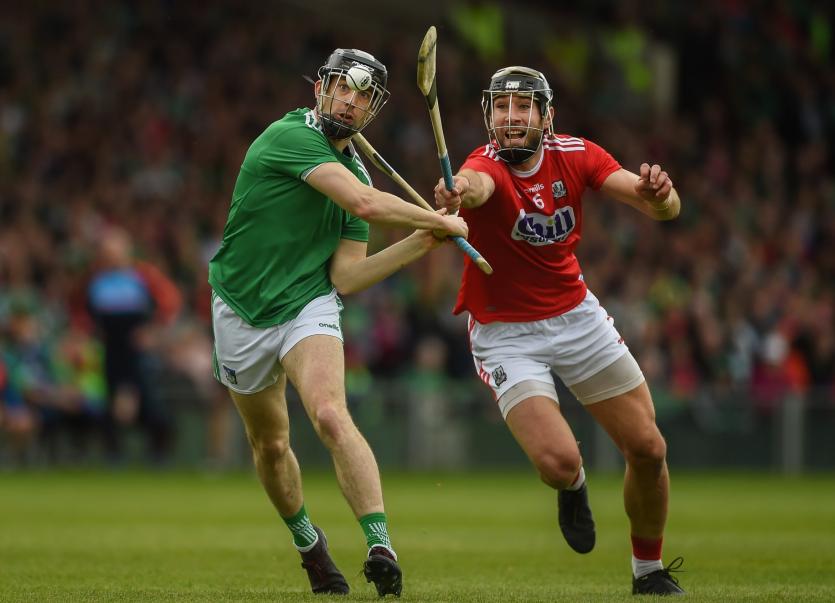 Graeme Mulcahy strikes for a score in the LIT Gaelic Grounds

DEFEAT for All-Ireland champions Limerick in the opening game of their title defence in the Munster SHC.

Cork were worthy 1-26 to 1-19 winners in the LIT Gaelic Grounds with a dominant second half from John Meyler's side, who bounce back from a round one loss to Tipperary last Sunday.

Limerick must now regroup to play Waterford in Walsh Park on Sunday week.

This was a game where Limerick never found their form of 2018, with thoughts of the Spring Allianz League title quickly eroded by a Cork side that brought a fierce hunger to the tie.

It was a half when Limerick were aided by the breeze and the sides evenly shared six wides.

The teams were level on six occasions before the Mulcahy goal put daylight between the teams for the first time.

Aaron Gillane and Mulcahy points had Limerick 0-3 to 0-2 ahead after six minutes but The Rebels did regain the lead before the game had reached 10-minutes.

A second Mulcahy point either side of Gillane frees nudged Limerick two clear for the first time but the game was again tied, 0-8 each after 23-minutes.

Then came the Limerick goal - Declan Hannon striking goalwards, and perhaps for a score, but Mulcahy was onto the dropping ball and although to the left of the posts the Kilmallock man smashed past Anthony Nash from a tight angle.

In injury time a clever Cian Lynch pass almost put Gearoid Hegarty in for another goal chance but it went abegging and it fell to Gillane to end the scoring with his fifth of the day for a two point half time lead.

Cork looked the sharper from the off in the second half with points from Luke Meade, Alan Cadogan and Daniel Kearney moving them ahead, 0-16 to 1-12.

They continued to power forward and were rewarded with a Patrick Horgan goal in the 51st minute to moved 1-18 to 1-14 ahead.

Seamus Harnedy points extended the lead as Limerick failed to get a foothold despite the arrival of subs Seamus Flanagan and Shane Dowling, among others.

The lead was six points inside the final minutes when sub Declan Dalton pointed with his first touch.