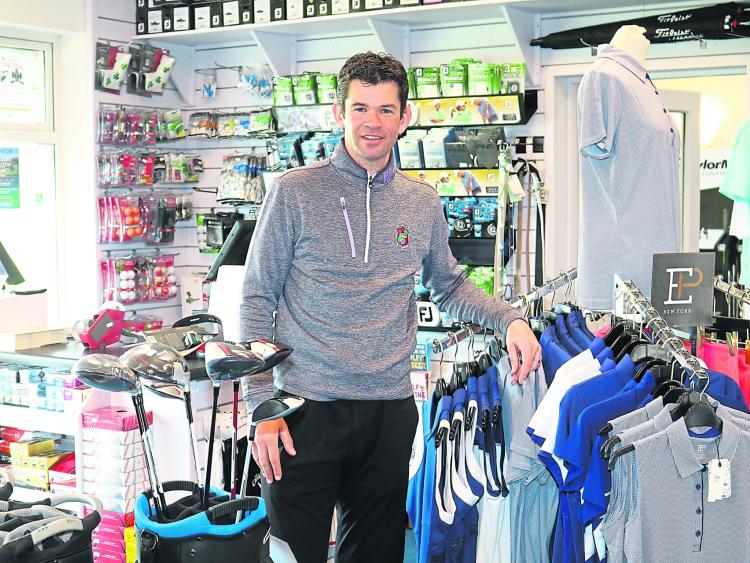 THE recently relocated professional shop at Castletroy Golf Club plays an integral role in the impressive range of services provided to both members and visitors alike.

PGA Club professional Gary Howie did his training and played all his golf as an amateur on the West coast of Scotland at West Kilbride Golf Club. Gary first came to Ireland in 2004 when he was an assistant pro to the renowned Tony Coveney at Killarney Golf Club.

After later spending time working as Director of Golf at Clement Ader just outside Paris, Gary moved to Adare Manor Hotel and Golf Resort in April, 2007 and was there for the two Irish Opens staged over the magnificent lay-out in 2008 and 2009 at well as the 2010 JP McManus Pro-Am.

Gary then took up the role of Club Professional at Castletroy in June 2017. Gary Howie explained: “I had been doing a little bit of coaching at Castletroy and always had ambitions to control my own business and when this opportunity came along I moved here in June 2017.

Castletroy has a great membership, 1,000 strong, with a further 150 juniors. I do loads of coaching which is what I trained for. It is more of a traditional Club Professional role now entailing coaching, retailing, club fitting, repairs and providing a high level of service to the Members and their Guests.

“It also allows me to compete a little on the Irish domestic PGA circuit with my intention to play 6 or 7 events this year.

“One of the big issues the Club wanted to look at here in recent years was improving the drainage and the playability of the course. Nowadays, we don't have temporary winter greens, we have a dry golf course; playable 12 months of the year which obviously suits the membership.

“If you do a Google Earth map down on Castletroy Golf Club, we are the little green pocket, surrounded by housing which is why we have introduced family membership and why we have our substantial junior membership.

"The Club are currently putting together a Corporate Membership package also to suit many of the established companies and those moving into the Castletroy and Limerick area.

"It would be fantastic to see people from the area coming up and socialising on a Friday or Saturday evening, come for lunch on a Sunday with the family and maybe we might take them out for an introductory golf lesson, introduce them to golf and see can we grow this game that we love and are promoting.

“In the Pro Shop we are coaching, we are club fitting, we are repairing clubs and we are retailing all major golf brands. We have Jack Ryan working with us, he is a +1 handicapper, but he is also a club fitter, so he can measure players up for clubs for their specific swing, height and ability.

“We also have Tom Collins working with us part-time. He is studying health and fitness and dietary requirements which is very important for today’s golfers and an area of game improvement we want to look at more.

"It has been great to see the Limerick hurlers and Munster rugby players playing golf here too, it is nice to see them recognise Castletroy Golf Club and for us to recognise them.”

The pro shop at Castletroy Golf Club can be contacted on 061-335753 or golf@castletroygolfclub.ie