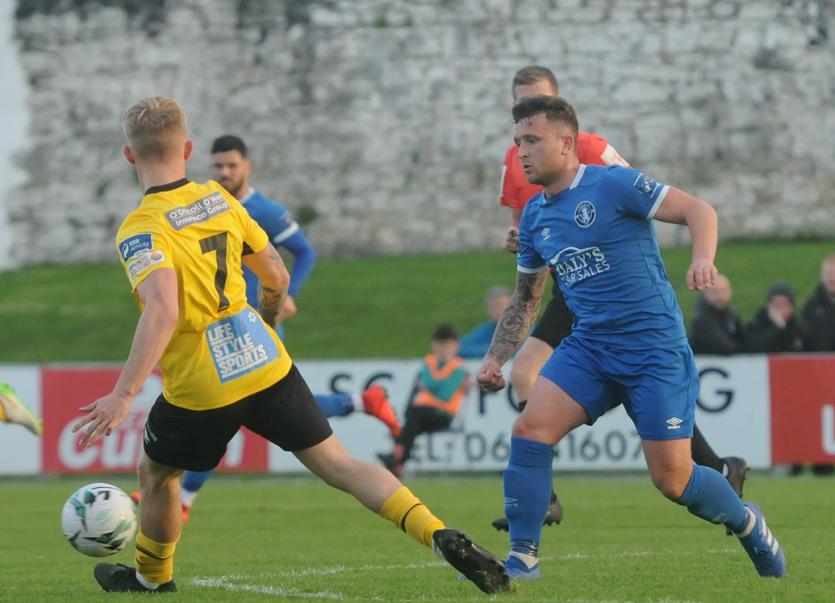 Kelly's thunderbolt struck from 25 yards out flew past helpless Gabriel Sava in the Bray goal to help Tommy Barrett's side end their two-game losing league run.

The wonder goal was reminiscent of the 30-year-old's unforgettable strike when helping Limerick score a 1-0 victory over Finn Harps in their Premier Division first leg relegation play-off at the Markets Field in 2015.

This was a vital win for Limerick as the Blues got their promotion bid back on track after losing their two previous league fixtures against Shelbourne and Longford Town.

Former Sligo, Bohemians and Dundalk manager Sean Connor, who has been representing an investment group who have been holding talks with Limerick FC, was in attendance at Friday night's game at the Garryowen venue.

Limerick confirmed earlier in the day that they are at an 'advanced stage of negotiations with an investment group' with talks continuing since last July.

A small but vocal number of Limerick fans attending Friday night's game voiced their disapproval at the prospect of Sean Connor's becoming involved in the club.

A host of early season injuries meant Limerick had a squad of just 15 fit players available for the visit of Bray, with the Blues including just four players on their substitutes' bench.

Limerick made two changes from the side which lost to Longford last Saturday night as Ger Barry and Lee Devitt replaced Seán McSweeney and Karl O'Sullivan respectively.

O'Sullivan was ruled out with a stomach bug, as was Edmond O'Dwyer. Limerick were also without the injured quartet of Will Fitzgerald, Sean Russell, Andy Quaid and Colm Walsh O'Loughlen, while Sean McSweeney was suspended after being sent off against Longford last weekend.

After a lively opening, Bray missed a terrific chance to go in front on 20 minutes when Dean O'Halloran ghosted in behind the Blues defence on the right before sending a pinpoint cross into the penalty area. The in-rushing Derek Daly looked sure to score, but his close range volley flew left and wide.

Back came Limerick and the Blues could well have taken the lead on 30 minutes, but Conor Ellis' headed wide from Aaron Fitzgerald's superb cross from the left flank.

Despite both sides creating a sprinkling of decent scoring opportunities over the remainder of the half, the game remained scoreless at half-time.

It was Limerick FC who created the first decent opening after the restart when, in the 49th minute, striker Ellis found Ger Barry just outside the area. Barry set up Darren Murphy, but his well struck drive was tipped over the crossbar by Bray keeper Sava. The resultant corner was easily cleared, however.

As the game swung from end to end, Bray thought they had opened the scoring three minutes later only for Dean O'Halloran's effort to be ruled out for offside. Killian Brouder had taken the original scoring effort by Dylan McGlade off the goal line.

The game appeared to be heading for a 0-0 draw until Kelly produced his dramatic winner.

Next up for Limerick FC  is an away date with Droghed United at United Park on Friday night next, May 10, 7.45pm.