WATCH: Munster to host Benetton in Pro14 play-offs after win over Connacht 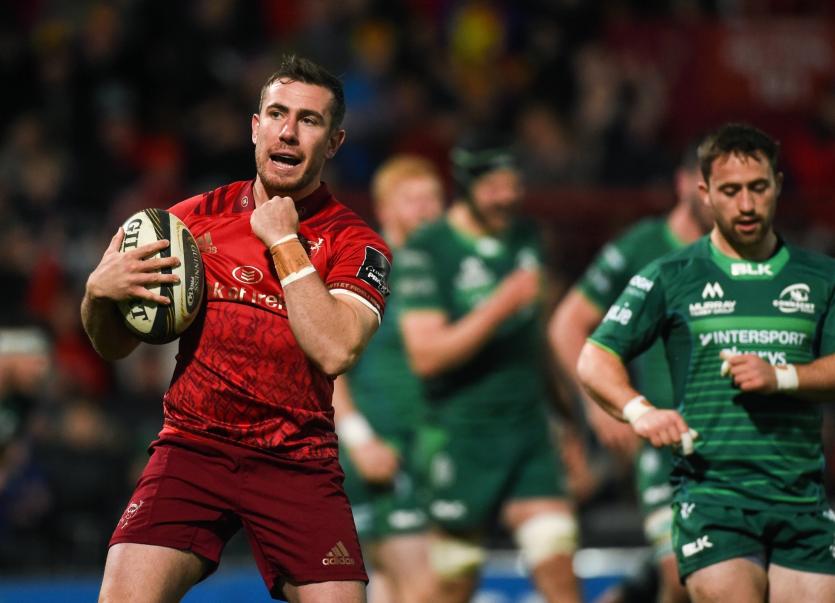 MUNSTER will face Benetton Rugby in the quarter-final play-offs of the Guinness PRO14 at Thomond Park next weekend after finishing their regular season with a hard earned 27-14 victory over Conancht at Thomond Park on Saturday night.

Despite Saturday's bonus point success, Munster had to make-do with a second-placed finish in Conference A of the Pro14 as table toppers Glasgow maintained their grip on top spot and the direct route into the semi-finals after scoring an impressive derby win over their own against Edinburgh.

Munster will now lock horns with Italian side Benetton - who will be making their first appearance in the knock-out stages of the Pro14 - when the sides go head-to-head at Thomond Park next Saturday, 3pm,

Johann van Graan's side produced a mixed bag of a display, managing two tries in the opening half through Man of the Match Tadhg Beirne and Mike Haley, while replacement out-half JJ Hanrahan dotted down late on, before an official attendance of 19,999.

Munster were dealt a blow before kick-off as Ireland scrum-half Conor Murray cried off in the warm-up after appearing to injury his neck. Murray was replaced in the starting team by Neil Cronin with Academy player Craig Casey elevated to the replacements bench.

Shannon clubman and former Ardscoil Ris star Casey, who is a member of the Munster Academy, enjoyed an impressive campaign with the Ireland U20 Grand Slam winning side this season.

It proved to be a memorable night for Casey who made his senior debut for the province when introduced as a replacement inside the closing 10 minutes of the game.

Saturday night's match referee Frank Murphy had the distinction of playing for both of these sides during his distinguished playing career.

Connacht dominated possession during the opening 20 minutes, but had nothing to show for their efforts with out-half Conor Dean off target with a penalty attempt.

Munster appeared to have finally shaken off their Heineken Champions Cup exit hangover  where they lead Connacht 3-0 after 21 mins despite the visitors looking the better side during the opening quarter. Out-half Tyler Bleyendaal kicked the home side in front with a 21st minute penalty.

That advantage didn't last long, however as prop Finlay Bealham burrowed his way over for a 25th minute try with Dean adding the extras for a 7-3 lead.

"That was a gilt-edged opportunity for Andrew Conway.

"He acknowledges his error, but he won't want to see the replay of that too many times."

Stephen Fitzgerald comes back to know the ball out of Conway's hands, and deny Munster a try!#MUNvCON #GuinnessPRO14 pic.twitter.com/jJglbH3e4H

Munster missed out on a gilt edged opportunity to regain the lead on 28 minutes when winger Andrew Conway collected an intercept pass and looked certain to score unoppsed before his former Munster team mate Stephen Fitzgerald knocked the ball out of his hands as he was set to dot down. A moment to forget for Conway who has enjoyed a terrific season in the red shirt.

The home side did regain the lead on the 31st minute when second row Tadhg Beirne collected Cronin's pass and powered through the Connacht defence before neatly side stepping Niyi Adeolokum and touching down.

Bleyendaal added the conversion and the New Zealand-born out-half also converted a smashing second try for Munster in the 37th minute.

The ever threatening Conway began the move with a terrific break up the right wing. The move was continued by captain Peter O'Mahony before finding Haley who troppted over. Bleyendaal's extras made it 17-7.

With the match clock in the red at the end of the opening half, Connacht did have a chance to reduce their appears, but Dean was off target with his penalty kick from 30 metres out.

Munster increased their 10-point half-time lead when Bleyendaal added his second penalty of the game on 57 minutes.

"We had to dig deep, and used last week's disappointment to get us over the line."

Man of the match Tadhg Beirne was a happy man after Munster's 27-14 #GuinnessPRO14 win over Connacht.#MUNvCON pic.twitter.com/cZ6S9z5IiJ

Munster lost replacement prop Jeremy Loughman to a sin-binning as the penalty count against the home side at scrum time began to creep significantly upwards.

With Loughman in the bin, Connacht made their superiority count in the 70th minute when flanker McKeon barged over from close range following a 71st minute scrum. Dean's conversion made it a six-point game, 20-14.

A 75th minute try from replacement out-half JJ Hanrahan ended any hopes Connacht had of staging a late revival, however. Hanrahan also added the extras.

Incidentally, Connacht have only ever won three away games against fellow Irish provinces in the Championship – in 2002 against Leinster at Donnybrook, in 2015 versus Munster in Limerick and last October in Ulster.