Not a good Friday for Limerick FC at Shels' 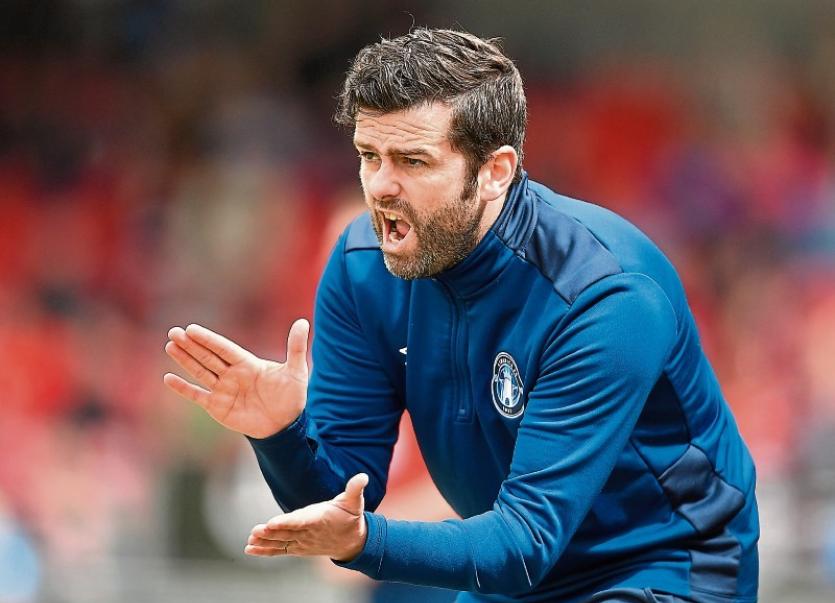 LIMERICK FC fell to their first league defeat in seven games when suffering a comprehensive 2-0 defeat to Shelbourne in their SSE Airtricity League First Division tie at Tolka Park on Friday night.

Two goals in seven first half minutes saw improving Shels' inflict a first defeat on Tommy Barrett's Blues since their 2-0 reverse at the hands of Bray Wanderers at the Carlisle Grounds at the start of March.

Limerick's second defeat in the league this season has seen the Blues slip to fifth place in the table, but four points off First Division table toppers Cabinteely FC.

However, the margin of this defeat could well have been bigger but for a string of fine saves from Limerick's in-form goalkeeper Jack Brady.

This was a disappointing outing for Limerick who had taken an impressive 13 league points out of a possible 15 prior to kick-off.

Limerick had Brady to thank for not falling behind inside the opening quarter as the netminder did superbly to thwart the home side on several occasions.

However, the Dubliners deservedly took the lead on 38 minutes.

James English found Aidan Friel on the underlap and his low cross was finished to the net by winger Karl Moore.

Shels' made it 2-0 on the stroke of half-time. James English cut into into the penalty area from the right and as he was tackled by Aaron Fitzgerald fell to the ground. The referee pointed to the penalty spot and Lorcan Fitzgerald hit the ball down the middle of the goal with Brady diving the wrong way.

The second 45 minutes failed to produce any further goals as Shels', favourites to win the league prior to the start of the season, closed out a comfortable victory which took them one point above Limerick in the table.

Next up for Limerick is another away fixture, this time against Longford Town at City Calling Stadium on Saturday, April 27, 7.45pm.