'Hopefully once we perform, we can get the result and get to the final - Limerick's Niamh Ryan 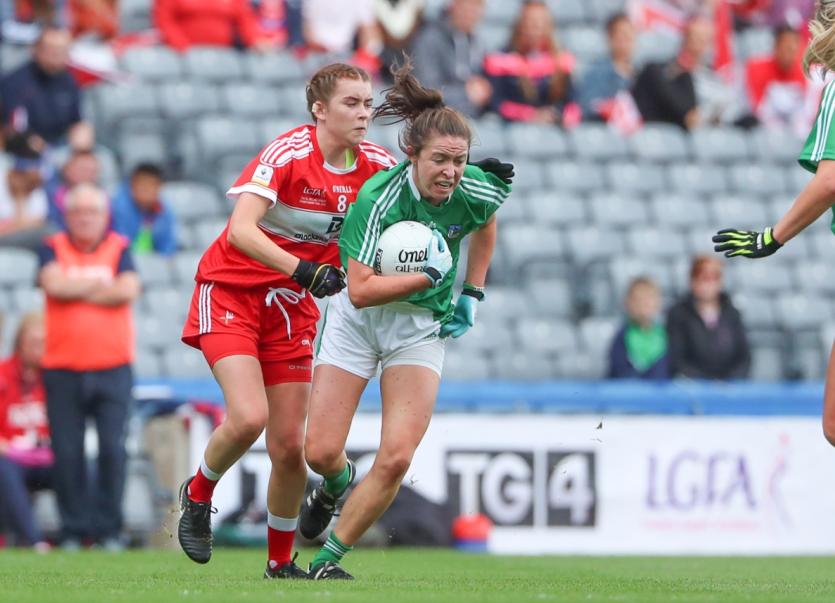 THE inside joke in Raheen every Sunday evening is: “We might see you Friday, Niamh.”

Niamh Ryan’s housemates know better than anyone else the sacrifices she has made to reach the top of the Ladies Football game, and this year she will combine camogie with that.

The Ballybricken native is a PE and Irish teacher at Laurel Hill Secondary School in Limerick City – and she has justified all of her difficult life choices in recent years and this Saturday plays in the Lidl Ladies Football Division Three League semi final against Fermanagh.

The Limerick defender missed out on chance to tour South East Asia last year, when she decided instead to give it a go with the Ladies footballers during her hiatus from the Limerick camogie setup.

But that choice made climbing the steps on the Hogan Stand on September 16 even sweeter, when the Shannonsiders won the TG4 All-Ireland Junior Final at Croke Park.

“I studied in UL, and group of my friends from there were heading off to do the Thailand, Vietnam trip last summer for a couple of months,” said the 24-year-old.

“I had it in my head that I was going to take a break from sport and go away and do that trip. The manager John Ryan asked me would I get involved with the Limerick footballers but I said I had the intention of travelling. But by March or April I was hooked. I knew there was a chance that we could be competitive in the junior championship. It was a gamble that I took. I said I would skip the travelling and I could always go again," outlined Ryan.

“Looking back it was definitely the right decision. It was a day to remember in Croke Park.”

Ryan, who was a selector for UL camogie during their Ashbourne Cup triumph earlier this year, can adjust in the most difficult circumstances. She looks forward to manoeuvring her tricky schedule and finding new ways to make things work.

Her housemates don’t see her from one end of the week to the next, because from Monday to Friday she is either teaching, working out, training, coaching hockey and camogie, or recovering. And that’s before the matches takes place.

“It is very busy but I wouldn’t have it any other way either,” said Ryan.

“If you were to ask any of my friends they would certainly say I am constantly gone and I am never around.  My housemates say to be on a Sunday night: 'We might see you Friday.' Between the coming and going I am always on the road, but it’s a good complaint.”

Ryan in is the Limerick panel along with her sister, Ciara, but seeing a very familiar face wearing the same colours or opposition is a regular occurrence.

Ryan plays club football with a few of her students. Only a couple of weeks ago she lined out with one student and against another, while in camogie it gets even more complicated.

“I would be marking students that I am teaching. In the lead up to the weekend they are saying: “Aw miss, who is going to win this weekend?” But it’s nice,” said Ryan.

A wonderful relationship exists between the students and teacher at Laurel Hill, and when Ryan brought the junior crown back to the school last September, she was blown away by the level of support she received.

She might not have travelled with her UL colleagues to South East Asia, or gone abroad during her Easter holidays this time around, but Wednesday’s trip to the Aran Islands will do.

Ryan’s eyes are on the prize and beating Fermanagh in the Lidl NFL Division 4 semi-finals this weekend will go a long way towards even more vindication for her sacrifices along the way.

“We went up to Fermanagh and got a win earlier in the league, and we were happy with that,” said Ryan.

“But they are a very good side, they won an All-Ireland a couple of years ago and will definitely bring a huge performance. We have building a panel since that game too so we will be looking forward to going out on Saturday and delivering a performance ourselves. Hopefully once we perform, we can get the result and get to the final.”