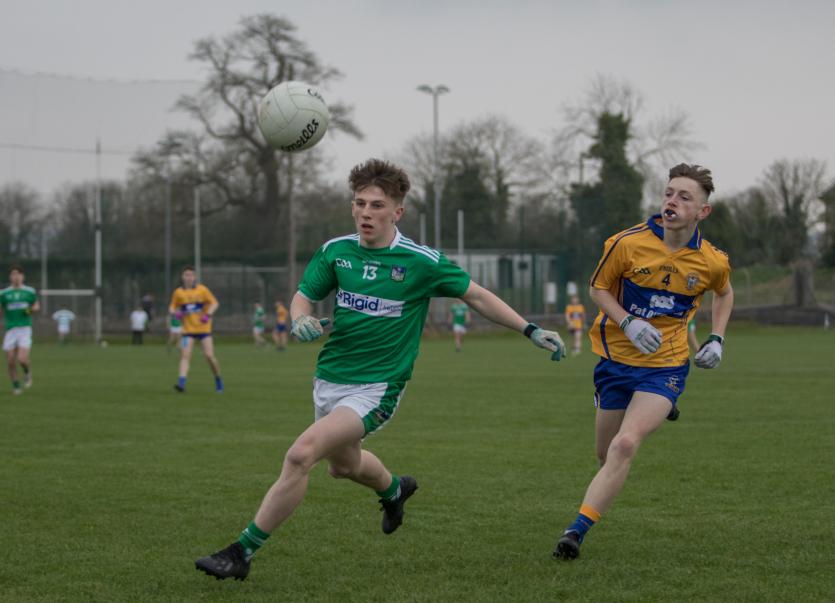 DEFEAT was Limerick's lot in the first round of the Munster minor football championship this Wednesday evening.

In the new-look Munster MFC, Limerick must now regroup to play Waterford in Dungarvan next Wednesday.

Clare powered over the winning line in the second half to defeat Limerick for a fifth successive season.

Limerick failed to score after the 13th minute of the second half.

Limerick started brightly and were 0-3 to 0-1 ahead after 10-minutes.

The teenagers in green set up with Ruadhan O'Connor in a withdrawn role and it helped provide an early platform of possession with Clare rarely finding a way in side the Limerick '45. The move also granted Eliah Riordan a license to drift forward with purpose.

Captain Eliah Riordan kicked two superb frees either side of fine points from play from by midfielder Michael Southgate.

The first Clare score from play came in the 14th minute from dangerman Shane Meehan - their only survivor from the starting team that reached the Munster final last Summer.

A free from Shane Hanahran had Limerick 0-5 to 0-2 ahead at the mid-point of the opening half but then came a Clare goal - Jamie Stack driving through the heart of the defence before finishing low to the net to level the game.

Within a minute Clare were ahead and 10-minutes till half time. The Banner were to find six successive scores to turn a three point deficit into a five point lead.

After 15-minutes without a score Limerick steadied just before half time with a Shane O'Donoghue free to leave it 1-7 to 0-6 in favour of Clare at half time.

Limerick kicked four wides in the half and had just two points from play across the 30-minutes.

On the resumption Riordan and O'Donoghue kicked neat points from play to leave just the goal between the teams and less than five minutes lapsed.

But the lead wasn't reduced any further and in the 11th minute came another Clare goal - Diarmuid Fahy with a neat finish from close range after Brendan Rouine made the opening after carrying forward.

A third point of the evening from play for Shane O'Donoghue did reply but Limerick had to play the final 10-minutes with 14 men when full back Patrick Dolphin was sent-off for a second yellow card offence.

With Limerick unable to find a score, Clare sealed a straight forward win in the final minute with a goal for substitute Eoin Talty.