Shane Dowling: 'Limerick’s biggest challenge this year will be getting out of Munster' 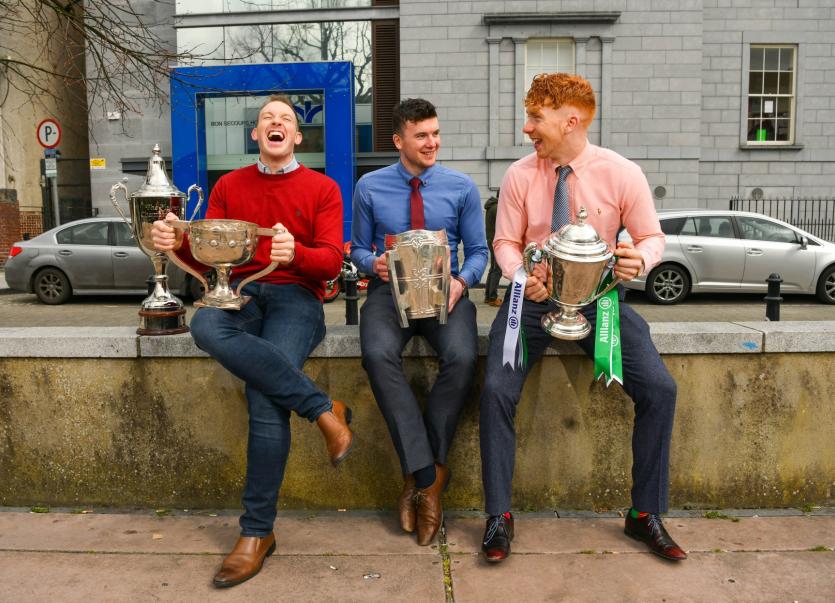 LIKE men resting on a wall after the toils of hard labour - Shane Dowling, Declan Hannon and Cian Lynch.

Photographs on George's Quay was met with more than the occasional glance from those passing by, and then inside the Limerick hurling silverware sparkled brightest on the boardroom table of Bon Secours Hospital in Barringtons.

Shane Dowling sits at the opposite end of the long solid wood table.

"This is my eighth year on the panel and for five of them eight years it has been very much unsuccessful, with the exception of 2013 when we won Munster SHC. The last two years have been great and even sitting down where now looking at all the cups in front of me is.....", outlines Dowling. No need for words, the nod towards the silverware finishes his sentence - a happy man.

In February the Na Piarsaigh and Limerick star turned 26.

The best is still to come he believes.

"I don’t see why there shouldn’t be more," said Dowling.

"Yeah - when you look into it, we are only back two and a half months; February a lot of work done, March a lot of work done and we only came back around mid-January. We haven’t a huge pile done, we are now going away with the clubs and will come back again and it will be like a new season. While we will be training and playing with our clubs, it’s a nice break and we will come back then," he explained.

Better to come from Limerick and from Dowling himself.

"It’s been great to get in and get the hard training done, which is very important and especially for someone like me - some lads get away with it, but I don’t and that’s just me. It was very important for me to get a good Winter’s work done and hopefully the next number of weeks and months will see that pay fruition," he said of a rare Winter and Spring with Limerick and not club-tied with Na Piarsaigh.

Next up is May 19 when Cork come to the Gaelic Grounds as five Munster counties go in search of three places in the All-Ireland SHC.

"It’s tough, a lot of counties would have seen that last year. I think Limerick’s biggest challenge this year will be getting out of Munster. If we get out of Munster it’s not that it suits us, but it’s so dog-eat-dog in Munster, it’s so competitive - In the league we’ve drawn with Clare, Cork came to town and beat us, I believe Liam Sheedy will have Tipperary hopping, and Waterford down in Waterford.... While we’re at the top, those are the facts of it, I don’t believe we’re too far ahead of any other team. Going week on week is very demanding and you saw John (Kiely) change the team after lads had played two games in the league. It wasn’t a change because of form so much as with an eye on the Munster championship, so that what happened us in Ennis last year won’t happen this year," explains Dowling.

The top three in the Munster SHC progress - the two top playing for provincial honours.

"I think it’s irrelevant, which road we go down, though it does make a difference that there’s only a handful of us with Munster medals, and I know John (Kiely) would be very keen to get his hands on the Munster championship. And the lads with one Munster medal would be keen to get their hands on another. Most of the lads don’t have a Munster medal though, so that’s definitely on the agenda," said the 2013 Munster SHC winner.

Last Sunday was just the sixth time that Limerick played senior hurling in Croke Park since the turn of the decade.

"I turned around to David Dempsey midway through the first half Sunday and said, ‘this place is like a morgue’. I know there were 40,000 people but divide them into different counties and how many of them were really supporting the teams in the hurling game? My next comment though was, ‘if there was nobody here this is brilliant for us’. As everyone knows there were plenty of years we weren’t going to Croke Park, and the preparations on Sunday helped because if we get back there we’ll know where to go, what to expect. It just makes things easier. It was a bit dead Sunday but from a Limerick point of view it’s important to get up there as often as possible," he stressed.

"While I always dreamt of winning Liam MacCarthy, I had never considered winning a league title and for many years I had said that we were a Division 1B team - that was my belief. We then had young people coming in and we had to develop and the timing was right when we got out of Division 1B because we were a team on the up and we had earned the right to be in Division 1A. A number of years ago I would have said we were where we belonged but the last few years that has changed. To be up there in our first year and to go on and win it, considering the number of lads that got game time, has been incredible. Especially to kick-off where we left off, considering what went on over the Winter - it’s hard to believe to be honest," he recalled of the Allianz Hurling League title win.

Dowling has played over 20 times in the championship for Limerick - scoring over 200-points in the process but 2018 and 2019 have, not surprisingly, been the standout seasons.

"A lot of people have learned in the last number of years. When we were there a number of years ago, if you had a smile on your face in the dressing room or a bit of a laugh three quarters of an hour before the match, some fella would be giving out and telling you that you were not tuned in - now if you are in the dressing room and not laughing and smiling three quarters of an hour before a match, someone thinks something is wrong with you. I’ve said it before but the whole enjoyment factor has been brought back. The whole mentality has changed - people realise that you have to enjoy yourself to perform. You have to be happy within yourself to perform on the field. People were trying to do the right thing a number of years back but they weren’t. With people learning more and science, we have the right balance in Limerick, with the right people in charge," outlines the Na Piarsaigh star of the changing face of Limerick hurling.

Dowling didn't start the All-Ireland SHC final or the Allianz Hurling League and is the very epitome of the competition within the panel.

"When we play matches and A v B isn’t the right term but whatever way you want to word it, there is nothing between the two sides. You would imagine if there was a Green v White or whatever, that the main team would win by 10-11 points but that doesn't happen in our games and doesn’t happen because the other 15 lads are putting on so much pressure. Competition is fierce but great because for a long time, that competition wasn’t there and if you were injured or couldn’t train they were waiting for you to come back and that’s no good for anyone."

While many eyes are focused on the Munster SHC, Dowling and his Na Piarsaigh have their Limerick SHC title defence coming next weekend. The Caherdavin club now managed by former Tipperary senior hurling manager Michael Ryan.

"It’s a break, because I get to train with Na Piarsaigh after I don’t know how many months. I haven’t got to meet the new management and it’s exciting times for us with a new set-up and I want to get back in there and see what it’s like. We have two games coming up and we all want to see where we stand. It’s a break, in that it is something different and you are not doing the same routine all the time. It’s very important to me and we all take it very serious - we are reigning county champions and we will be sitting down looking at it long enough so when you are playing you want to win as much as possible," he outlined.

"The core principles stay the same but you have to adapt to a club team, where you are expected to be a leader and expected to perform. You have been away but the lads in the club have put in hard work over the last number of months so you can’t go in and stroll around the place because it doesn’t look good no1 and you are leaving you club down. As a county player you are expected to put your hand up and perform and that’s the pressure that comes with it," he explained.

This spring Dowling started a new job with Premier Medical. His new employment and history of injuries had him best placed to comment on the new Bon Secours Hospital sponsorship of the Limerick club SHC.

"It’s fantastic for a very important reason - players get injured and to have healthcare professionals sponsoring the championship is a good move for Limerick and for the hospital itself to be associated with teams. With hurling, you’re going to get injured. Personally, I started a new job with Premier Medical and I’ve been in here on business numerous times. The new entrance, all of that is fantastic and we’re lucky to have it in Limerick. It’s a good move, I know a sponsorship is about finance but even from the point of view of helping people in Limerick it’s great. I was here getting an MRI a few weeks ago and any of the lads who get injured, it’s the first port of call. Other people in Limerick mightn't be aware of the facility here, it’s easy to access and it’s very good," said Dowling.