Betting: The 'Pin-prickers' guide to the 2019 Aintree Grand National 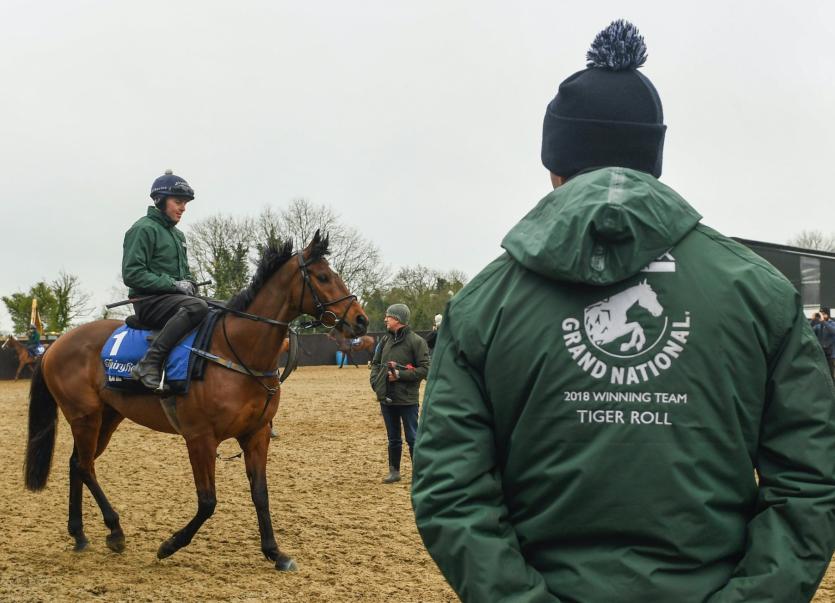 Tiger Roll, most people's favourite for the big race.

Wondering why there is a queue outside your local bookmakers? What’s with the weird text from your granny wanting to know if you “have something for the big one”?

Oh yeah, tomorrow is Grand National day, the one time of year everybody has a bet, whether they can tell one end of a horse from another.

So, if you want to get in on the action and hopefully win some cash you could get out the paper, find the racecard and stick a pin in it. Or you could check out the Limerick Leader’s quick guide to the runners with a star rating of one to five signifying the following

1 – Should just stay at home; 2 – Might make it around, won’t reward your support; 3 – Fair prospect of making you some each-way cash; 4 – Strong contender, definite each-way shout; 5 – Should win. Woo-hoo!

Remember to get down to the bookies early and take whatever price you can, as it will invariably be cut in the afternoon.

If you like one because of its name or the jockey’s colours, don’t let us put you off – you may have accidentally landed on the best horse in the race.

Do, however, look around for bookies paying extra places as you’ll need all the chances you can get with 40 runners. Odds quoted below are best available at the time, so shop around and good luck!

1 – Anibale Fly 16-1: One of three for JP McManus, placed in last two Gold Cups and in this race last year. Better than ever, but higher in handicap. Solid chance – 4

2 – Valtor 80-1: Romped home in Ascot handicap, but didn’t appear to like going left-handed last time. Too high in weights – 2

3 – Tiger Roll 9-2: Not since Red Rum has a repeat win seemed so plausible. Feasibly handicapped, better than ever, but carrying more weight. Big player – 4

4 – Outlander 125-1: Classy on his day, but best days are in the past and doesn’t like travelling outside Ireland. Sold out of Gordon Elliott’s yard this week – 2

5 – Don Poli 125-1: This test would be right up his street if he retained his old ability. Recent evidence suggests he doesn’t, however – 1

6 - Go Conquer 50-1: Quality, bold jumping stayer who will give you a run for your money for a while, but won’t stay. Surely should have gone to Friday’s Topham Chase over 2 miles 5 furlongs (2m 5f) - 2

9 – Lake View Lad 16-1: Sharply progressive this season winning good races in Wetherby and Newcastle. Good warm-up at Cheltenham. A little high in the weights though – 3

10 – Pleasant Company 22-1: Beaten a head last year in this and aimed all season at going one better. Higher in the handicap however and may have missed his chance – 3

11 – Ballyoptic 40-1: Plenty of back class might encourage you to look past his mediocre form this season. Sire has a great record in this, so not without a chance – 3

12 - Dounikos 33-1: Smart novice for Gordon Elliott last year, starting to come back to form, strong at the finish last time in Punchestown. Player – 4

15 –  Rock The Kasbah 18-1: Won strong Cheltenham chase in November that can be a good pointer to this. Extra distance here may be a problem though – 2

16 –  Warriors Tale 125-1: Clearly failed to stay last year for all he loves the fences. Another who should have gone to Friday’s Topham Chase instead – 1

17 – Regal Encore 66-1: Very patchy profile and if this was held at Ascot you’d give him a small squeak, but it isn’t, so look elsewhere – 1

18 – Magic Of Light 125-1: Very progressive for the redoubtable Jessie Harrington but yet to race past 3m1f, let alone win, so passed over – 2

19 – A Toi Phil 80-1: Never won over 3m and no prospect of staying this distance. Inexplicable entry for owner with plenty of good chances in race like Tiger Roll and Dounikos – 1

20 – Jury Duty 18-1: High quality, progressive staying chaser for Gordon Elliott, but beaten when he unseated the rider on only try at 4m – 3

21 – Noble Endeavour 66-1: Another for Elliott who has shown up well in some big staying chases without looking like winning one and recent form not encouraging – 2

22 – Monbeg Notorious 66-1: Yet another for Elliott and has a couple of good staying chases in the bag, though not recently. Needs rain, but not without a squeak – 3

23 – Ramses De Teillee 25-1: Big performances in defeat last twice, ground versatile but very young at 7 and maybe should have waited for 2020 – 3

24 – Tea For Two 66-1: Grade one winner here under today’s rider two years ago, but can be an iffy jumper and unlikely to stay – 1

25 – Just A Par 150-1: Sneaked in as a reserve here and has got good form in long distance handicap chases if you look far enough. Never shone here though – 1

26 – Step Back 28-1: Lightly raced runner for shrewd stable who romped away with the Bet 365 Gold Cup last April. Twelve pounds higher, but not ruled out – 3

27 – Ultragold 66-1: Loves these fences as two successive wins in the Topham proves. Should have gone for the hat-trick because he won’t stay – 2

28 – Blow By Blow 150-1: Another daft entry from the Elliott/O’Leary axis who will do well to stay on its feet and won’t stay the distance – 1

29 – Up For Review 40-1: Hails from a powerful stable but hasn’t given the impression that an extreme stamina test like this will suit – 1

30 – Singlefarmpayment 66-1: Frustrating type who travels well but rarely follows through when push comes to shove – 2

31 – Vieux Lion Rouge 66-1: Terrific record over these fences as a win and second in the Becher attest. Two failed attempts at this distance dampen enthusiasm – 2

33 – Vintage Clouds 14-1: Has run really well in good trials for this like the Welsh and Scottish Nationals, good second last time at Cheltenham. Each-way shout – 4

34 – General Principle 40-1: Irish Grand National champ and his pulled up effort last time not as bad as it looked. One of the likelier types for Elliott – 4

35 – Livelovelaugh 80-1: Never won past three miles and has the look of one that’s in here to give his owner Rich Ricci a day out – 1

36 – Walk In The Mill 28-1: Winner of the Becher so loves the fences and responds very well to pressure. Could be well handicapped and a big player – 4

37 – Folsom Blue 80-1: Has run some big races in staying chases and will stay no problem. He won’t stay quickly enough though – 3

38 – Captain Redbeard 66-1: Hasn’t convinced over these fences in three previous tries including unseating in this last year. Stamina also an issue – 2

39 – Bless The Wings 150-1: Great old trooper for Gordon Elliott who was just touched off in an Irish National three years ago. At 14, he’s practically an OAP, so not likely to win here – 2

Conclusion: Last year’s 1, 2, 4 all look likely to run well again, but it’s the newbies that could dominate in the end and we suggest: 1 Rathvinden 2 Dounikos 3 Walk In The Mill 4 Tiger Roll 5 Joe Farrell