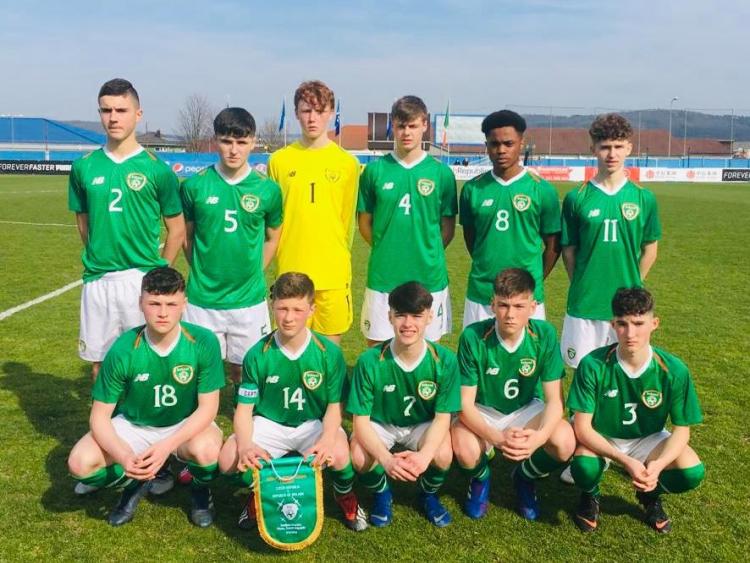 Limerick's John Ryan, front row, right, helped the Republic of Ireland U15s to an exciting friendly win over the Czech Republic this Tuesday

LIMERICK teenager John Ryan played an impressive role in the Republic of Ireland U15s excellent 1-0 win over the Czech Republic in the first of two friendlies at the Stadium Prestice this Tuesday.

A second half goal from Michael Leddy, of Shamrock Rovers, edged the Rep of Ireland to victory over the hosts.

Talented Castletroy College student John Ryan has now made eight appearances for the Rep of Ireland U-15s this season, since making his debut for the side in Poland last November.

In addition, he has featured in another double header away to Cyprus and a four-team tournament in Spain against the host nation, Holland and Hungary, the latter as captain.

The versatile Ryan, a third year student at Castletroy College, is a past pupil of Milford NS and Gaelscoil Castletroy.

In 2017, Ryan joined St Kevin’s Boys, of Dublin. At the start of last  year, he signed for Shamrock Rovers.

Head Coach Jason Donohue has named his starting XI as @bfcdublin's Jamie Mullins captains the side against the Czech Republic!

Fifteen of the 18-player Rep of Ireland squad which has travelled to the Czech Republic ply their trade for home-based clubs.

The Republic of Ireland U15s also face the Czech Republic in a second friendly fixture at the Stadium Dobrany this Thursday at 10am Irish time.