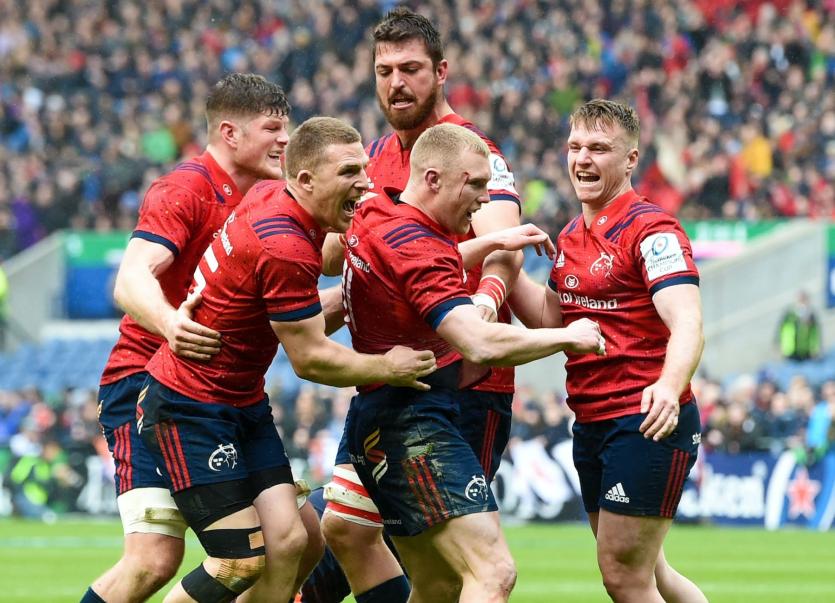 Munster are into the last four of the Champions Cup for the third successive season with a 17-13 win over Edinburgh at BT Murrayfield.

Two tries from Keith Earls and a conversion a piece from Joey Carbery and Tyler Blyendaal added to a penalty from Bleyendaal, secured a famous away win and passage into the final four to face Saracens or Glasgow on the weekend of April 19/20/21

This was an arm wrestle of a game, played in the main between the two ten metre lines with neither an inch given or asked for. Over 36,000 fans made their way into the famous stadium and the largely red crowd were not disappointed.

Edinburgh opened the game on top, forcing Munster to defend for large periods of the opening quarter. Such was the pressure applied, Tadhg Beirne was sent to the bin after 11 minutes for lying on the wrong side of a ruck, close to his own line.

Munster, down to 14 men, looked in trouble. However, the opposite was the case as they made their way down field, before the quick thinking of Keith Earls saw he take a quick penalty, running over to open the scoring, against the run of play in the opening 19 minutes.

How clever is this from Keith Earls!?

Carbery added the extras to make it 7-0 to the visitors. Their lead lasted eight minutes as Edinburgh continued their strong start. Phase after phase lead to Munster losing numbers in defence (Jack O'Donoghue took a knock) leaving Chris Dean with the space to make it 7-5. Van Der Walt kicked the easy convert to make it 7-7 after 28 minutes.

Chris Dean finishes another period of pressure from the hosts.

With Arno Botha on for Jack O'Donoghue and Mike Haley pulling out before the game started, Munster began with a back three of Keith Earls, Andrew Conway and Darren Sweetnam. The injuries were beginning to mount up as Edinburgh took a 10-7 lead after 36 minutes through the boot of Jaco van der Walt. (10-7)

Joey Carbery was the next blow for Munster to get over as the former Leinster 10 pulled up after 35 minutes with a tight hamstring, an injury he took into the game. The half time score of 10-7 to the hosts gave Munster plenty to think about.

Munster came out for the second half with more of an 'intent' to play. They attempted to stretch the home side's defence and used the boot of Conor Murray and Tyler Bleyendaal to good effect. Indeed the sides were level at 10-10 once Bleyendaal kicked a penalty after 47 minutes.

When Jaco van der Walt kicked his side ahead, 13-10, after 51 minutes the game looked as if it was going to open up, but the opposite was the case as both sides saw the end in sight.

Twenty minutes later, following a reversal of a penalty against Rhys Marshall, Munster found themselves in the Edinburgh 22, going with a 10 man line out to attempt to cross the whitewash. The line out failed, but a few phases later and twenty minutes after the last score, Earls crossed the line in what was a finish of World class quality.

Munster fans were in for a nervous ten minutes as Edinburgh threw everything at Johann van Graan's men in an attempt to win the game with a try. Despite their best efforts and over three minutes of play after the clock went red, Munster reached the semi final after an epic tie in Edinburgh.