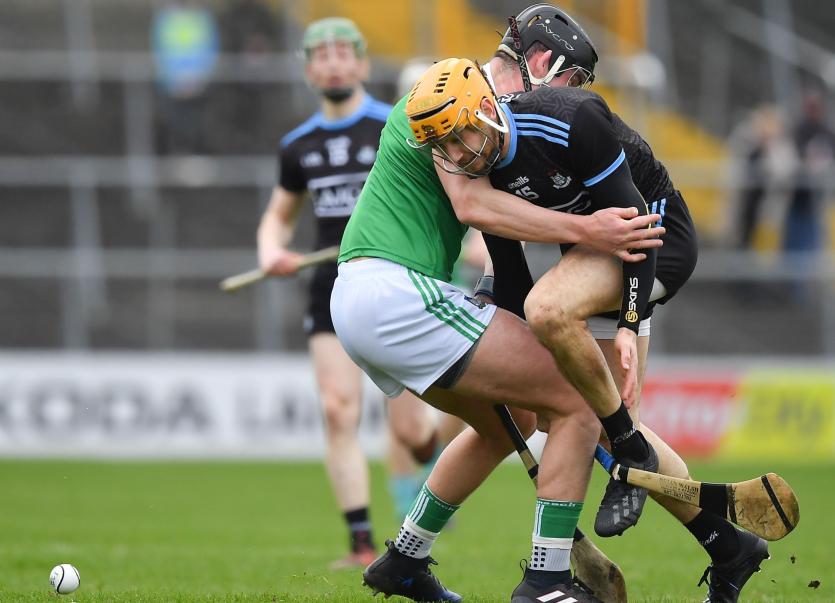 Eamonn Dillon, of Dublin, breaks his hurley in a clash with Limerick's Paddy O'Loughlin in their Allianz Hurling League Division 1 semi-final at Nowlan Park on Sunday last

THEY might not have played as they would have wished but nonetheless Limerick did enough to secure a place in the National Hurling League final in Nowlan Park last Sunday.

The game lacked flow, it was sloppy and didn’t have the energy you would normally associate at this level. A couple of factors might have contributed to that, it was a very cold day and Limerick were against a strong wind in the opening half.

The referee also played a part and some of his decisions were hard to understand. Sometimes you have to find a way to win a game and this was one of those days for Limerick. They should have pushed on and won this game by a bigger margin particularly after they scored the goal in the second half.

Instead it was Dublin that moved up a gear, they replied with a goal and finished out the game with four points without reply. Semi finals are hard to win and this game was always about getting over the line. A number of Limerick players didn’t have a good day but others delivered.

Diarmaid Brynes had a fine game, his work rate, matched by quality diagonal balls to the forwards always gave the best option. You learn a lot about teams in games like this and we certainly have learned a lot about this team during the league.

VERY few would have expected to see Limerick in the league final and even John Kiely admitted it after the game. To think it took Limerick forty five years to win the All-Ireland title and no league title since 1997 and here we are now in the space of a few months looking to add the league to the championship won last August.

It tells you a great deal about the attitude of the players. John Kiely was quick to praise the players for their brilliant attitude last Sunday but credit also to the management because it is they that set the mood.

To be in the league final shows a great hunger within the squad and those extra games will hopefully stand to the team later in the summer. While Limerick had the better of Dublin I was impressed with what Mattie Kenny has done with them in a short time.

They have a very good full back and centre back. They work very hard and are very mobile. The one area that will catch Dublin is in attack. They have work to do here but they will hurt a few teams later in the summer.

The level of consistency Limerick have shown has been very impressive. The manner in which they have approached games has been really professional and going back to Croke Park next Sunday will not hold any fears for them.

They will face an improving Waterford team. I have seen them three times this year and much of what we have seen from them is very close to how Limerick played last year. They now have a tendency to play a shorter game but they are developing well under Pauric Fanning.

They will have benefitted greatly from the league and Fanning has found a few players that will be of major assistance to him come championship time.

LIMERICK didn’t always find their man with the perfect pass last Sunday but when they had to make it happen they did.

I had the former Kilkenny great Tommy Walsh beside me in the press box last Sunday and it was interesting to hear what he thought of Limerick, “They are a super team that can create magic in minutes, I really like how they move the ball and how comfortable they are on the ball.

“They can move it fast by hand and by the hurley and that takes time to master.

“ I would like to see them hit a bit more direct to the forwards because they have some quality in that area of the pitch.”

Dublin put it up to Limerick and some Limerick players were well tested. They were particularly well tested in defence and on occasions Limerick were slow to move the ball, some players took a bit much out of the ball and Dublin punished them for that.

The Dublin half backline had the better of the Limerick half forward line and it saw all three that started in the area taken off.

Now, some were taken off because of yellow cards but they will know themselves they have room for improvement. Diarmaid Brynes, Cian Lynch and Graeme Mulcahy took hold of the game.
Brynes won man of the match while Lynch was like a hoover. He worked really hard and his use of the ball was excellent.

Mulcahy scored some sparkling points from difficult angles. He showed signs of last summer in this game. He is probably the greatest corner forward to come out of Kilmallock.

Winning and not playing well is always a good sign of a team. Limerick managed that last Sunday and as a unit they have developed great patience.

They are happy to work the ball and wait for the opportunity to present its self.
Take that goal that Seamus Flanagan scored. He took it really well and had a bit to do when he got the ball. It was the build up where Diarmuid Byrnes sent a long delivery that forced Cian Lynch to show one of his many talents in the way that he caught the ball.

He could have taken it on himself but instead he lifted his head and saw Seamus Flanagan in a better position. That’s the sort of stuff that sets winning teams apart and it’s great to see Limerick players displaying such skills.

THE National League is the second biggest competition in the GAA calendar and Limerick last won the title in 1997 against Galway in Ennis. The last time Limerick played in a league final in Croke Park was in 1973.

Next Sunday they face Waterford and the teams have never met in a league final. This will be a very interesting game but I expect Limerick to win. They are more settled and if on form they have a better forward unit than Waterford.

I think Pauric Fanning has got Waterford in a good place and a place in the league final will be satisfying for him. Waterford have some really good players, they have found a few in the league that we will see more of come the summer.

They have been without a number of key players in the league so that tells you they are making sustained progress.

They look a great deal more settled in defence than in previous years and the Bennett brothers have added much needed punch to the attack.

Waterford have showed us in recent weeks that they hurl to the end of the game. Twice against Galway they came from behind and they have been impressive in how they finished out games.

We will know a great deal more about them next Sunday, but Limerick are a couple of gears ahead of them at the moment, but that could close before the Munster championship is over.

ONCE again it was a difficult week for GAA families in Limerick. Former Old Christians and Limerick hurler Pat Howard lost his wife Claire.

Mary O’Grady wife of PJ from Patrickswell and Josephine Hickey from Caherconlish wife of the late PJ who played for Caherline and Limerick. To all families I offer my sincere sympathies.