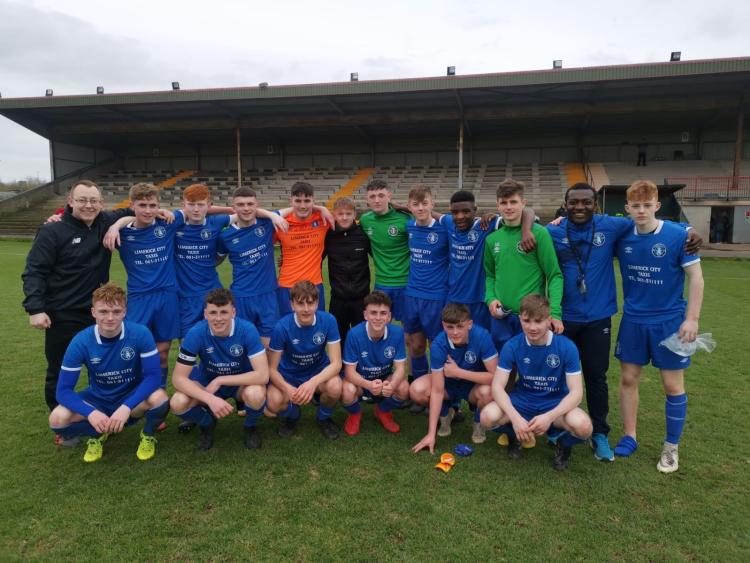 LIMERICK FC U17s recorded an impressive 2-0 win over Cork City in their SSE Airtricity Under-17 League Southern Division fixture at Bishopstown on Saturday.

Limerick U17s came into the game on the back of an excellent 5-2 victory over Carlow-Kilkenny in their previous outing, while Cork had beaten Wexford FC 4-0.

The first half was a very fast paced game with both teams battling very hard to retain possession. Limerick FC were looking the most dangerous in the final third, but a number of good chances to take the lead were narrowly off target.

An unfortunate spell of bad luck for Limerick FC goalkeepers struck again on the 26th minute as Gearoid Malone injured his ankle. With two of the three Limerick FC keepers already out injured for the game, Eoin Guerin, a centre back, stepped up to the plate to stand in goals.

After a 10 minute stoppage, the game resumed with no let-up in pace. An excellent penetrating pass from Limerick FC’s Jake Dillon found Conor Keane making a sharp run in behind Cork’s defensive line with the goalie charging out, from 25 yards Keane lobbed the goalie with a clinical finish. Two goals in two games for the Limeirck FC striker.

Limerick retained their 1-0 lead until half-time.

The second half showed the same battling aggression by both teams to win possession of the ball, including fantastic passages of passing play by both sides.

However, on the 54th minute it was Limerick FCs Conor Keane who was putting Cork under pressure again. This time Keane played an excellent cross field pass to Joey Rushe, who hit a first time precision shot from the edge of the box into the top left corner leaving the Cork keeper no chance of saving it.

Cork were not going to let Limerick have all three points easy and fought hard to try get a goal to bring themselves back into the game.

Limerick FC brought on all substitutes over the final 30 minutes of the game giving them fresh legs that gave them the energy to battle hard keeping the clean sheet and recording another precious wins.

Notable mentions on the day for Eoin Guerin and Jake Prendergast who returned this weekend to play their first games of the season.

Limerick FC would like to thank the Cork City FC management team and physio for all their support with treating injured goalkeeper Gearoid. We would also like to wish Gearoid a speedy recovery and we look forward to seeing him back in goals
soon.

Next up for Limerick FC U-17S is a home game against Bray Wanderers on Saturday next, March 30, at 2pm in Hogan Park. All support is greatly appreciated.