Limerick FC within a point of top spot after Cabo' win 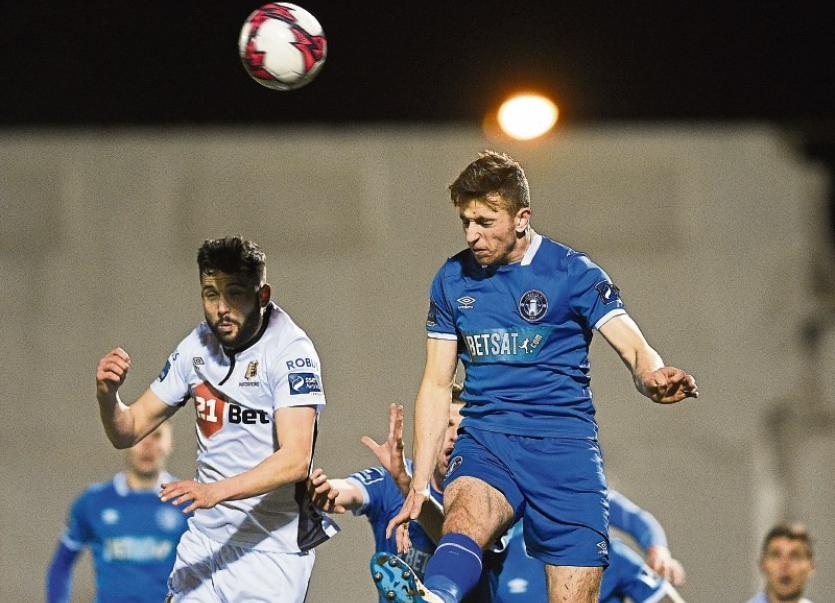 Connor Ellis, right, netted the decisive goal as Limerick FC made it back-to-back wins in the First Division with victory over Cabinteely on Saturday

RESILIENT Limerick FC have moved within a point of the league leaders in the SSE Airtricity League First Division after scoring an excellent 2-1 victory over Cabinteely at Stradbrook on Saturday afternoon.

Goals in either half from Sean Russell and Connor Ellis helped Tommy Barrett's charges make it back-to-back league wins.

However, Limerick goalkeeper Jack Brady played a huge role in this precious victory as he superbly saved a second half penalty at a time when the sides were tied 1-1.

Limerick are now just one point behind behind early season pace-setters Shelbourne, Bray Wanderers and Athlone as they followed up on their impressive 3-1 league win at home to Cobh eight days ago with a second successive victory in the First Division.

Limerick FC deservedly went in front on the 11th minute. Sean Russell’s half volley had the Blues in front after an excellent run by Connor Ellis.

The visitors took a grip on the game as the game as the half progressed and it took a fine save by Cabinteely 'keeper Stephen McGuinness to deny Sean McSweeney with a close range half volley, following Shaun Kelly’s pinpoint cross.

However, the complexion of the game changed in the 35th minute when Cabo' equalised. Keith Dalton corner was powerfully headed goalward Conor Keeley before the ball took a deflection into the net

The game remained deadlocked 1-1 at half-time.

Limerick were thankful to goalkeeper Brady for keeping them level on 57 minutes when he produced a terrific penalty save.

When Cabo's Keith Dalton was bundled over in the box the Dubliners were awarded a penalty and a chance to take the lead. However, Robert Manley’s spot-kick was brilliantly saved by Brady.

Limerick strick for the winner on 73 minutes. Cabinteely keeper McGuinness came out to clear a long ball, but the ball hit Connor Ellis who made no mistake with the scoring opportunity to fire the visitors to a second successive league win.