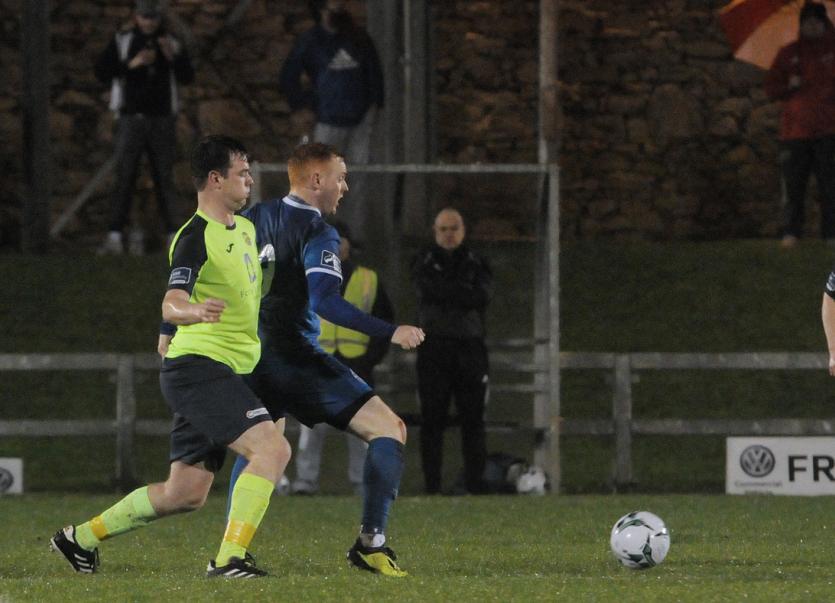 Limerick FCs Kieran Hanlon, who scored two goals against Cobh Ramblers at the Markets Field on Friday night, wins possession of the ball

LIMERICK FC claimed their first win of the SSE Airtricity League First Division season when easing past Munster rivals Cobh Ramblers 3-1 on a wet night before an official attendance of 355 at the Markets Field.

Limerick had failed to scored a goal in any of their three opening league games. However former Pike Rovers front man Kieran Hanlon ended the Blues 285 minute run without a goal when firing the home side in front after 15 minutes.

Two further first half goals from Connor Ellis and Hanlon helped the home side secure a much-needed victory. Incidentally, Hanlon likes playing against Ramblers as he netted the only goal in the Shannonsiders pre-season victory over their Cork rivals at St Colman's Park last month.

Limerick started the game on the front foot and could well have been 2-0 to the good inside the opening six minutes.

With just two minutes gone Conor Ellis was denied a first goal of the season by a terrific save from Cobh 'keeper Adam Mylod. Kieran Hanlon's follow up effort did find the back of the net, generating a huge roar from the small, but enthusiastic home support in the main stand. However, the goal was disallowed for off-side.

Four minutes later, the Blues should have taken the lead, but Ellis shot over the crossbar when played through on goal.

The goal the home side and their supporters craved finally arrived in the 14th minute when Hanlon fired home superbly past visiting 'keeper Mylod.

The goalscorer could well have bagged a second goal shortly after being handed the opportunity by O'Sullivan's cutback. However, the alert Mylod denied the home side with his legs.

Cobh provided a warning that they remained a real threat while the advantage remained at a single goal when Matt Lamb's superb strike flashed just past the left hand upright.

The home side doubled their advantage with a terrific solo goal from striker Ellis on the half hour mark. Ellis picked the ball up just inside his own half and showed a terrific combination of pace and strength to outstrip the Ramblers defence, before smashing the ball past Mylod for a 2-0 lead.

If Limerick thought they were going to enjoy a comfortable night, they were mistaken and Cobh halved the Blues lead when Jaze Kabia scored after some lacklustre defending from the home side.

However, the complexion of the game five minutes before half-time when Tommy Barrett's side regained a firm grip on proceedings as Aaron Fitzgerald played goalscorer Hanlon in on goal and the former Pike Rovers player finished superbly for 3-1.

As the action continued to swing from end to end, Cobh came within a whisker of pulling a goal back just before half time, but Stephen Kenny's effort smashed against the top of the crossbar.

Cobh 'keeper Mylod pulled off two smart saves in the third quarter to prevent Limerick from adding to their tally of goals.

Limerick shaded possession through the final 20 minutes as the Blues comfortably maintained their two-goal advantage until full-time.