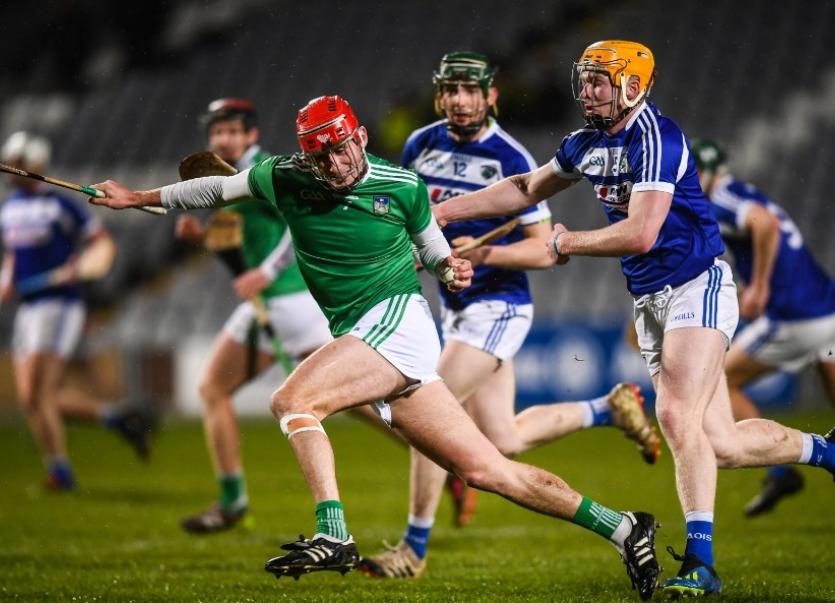 Barry Nash carries the ball out of defence in Portlaoise

LIMERICK eased into the semi finals of the Allianz Hurling League with this Saturday evening 17-point win over Laois.

In Portlaoise it finished Limerick 2-22, Laois 0-11 in a straight forward work-out for the All-Ireland champions.

This was Limerick's sixth successive quarter final appearance and a fourth straight win.

But on March 23/24 Limerick will be looking to end their semi final hoodoo and reach a first final since 2006.

In this quarter final Limerick lined out with just six of their All-Ireland final team and handed first starts of the 2019 league to William O'Meara, Barry Hennessy and Barry Nash.

With a senior debut at half time for Aaron Costello, a return from injury for David Reidy and a first appearance of the league for Andrew La Touche Cosgrave, Limerick have now seen 32 different players in the six league games to-date.

With no breeze and constant drizzle in Portlaoise, there were eight different scorers for Limerick in the first half, while at the other end of the field, just one point from play for Laois in the first 35-minutes.

But Laois did have 12 wides in the first half - just five for Limerick.

The visitors to O'Moore Park were 1-4 to 0-1 ahead after five minutes with Seamus Flanagan getting a fine fourth minute goal after a flowing move involving Gearoid Hegarty and Robbie Hanley.

Limerick were to score just one in the next 10-minutes but the Laois radar was off and they made no in-roads and weren't to score from play in the half, aside from wing back Lee Cleere after two minutes.

Mark Kavanagh frees had helped Laois back to 1-7 to 0-4 after 24-minutes but Limerick finished the half on top.

There were five Limerick scores in the final 10-minutes - a second for Hegarty and Peter Casey, among them.

The second goal came five minutes from the break - a nice finish from a tight angle by Conor Boylan, after Barry Murphy held up possession.

Just like the first half Limerick were fast from the blocks on the restart - Barry Murphy adding an early point from play to his free-taking and now all six forwards were on the scoresheet from play.

A lineball from Darragh O'Donovan had the lead out to 2-19 to 0-9 within 15-minutes of the new half.

The scores drew up as the game reach it's inevitable conclusion - Flanagan and Boylan added to their accounts with just two Limerick scores across almost 20-minutes.

Limerick were to finish with 15 wides and Laois 17.

Limerick now await until next weekend to learn their semi final opponents.